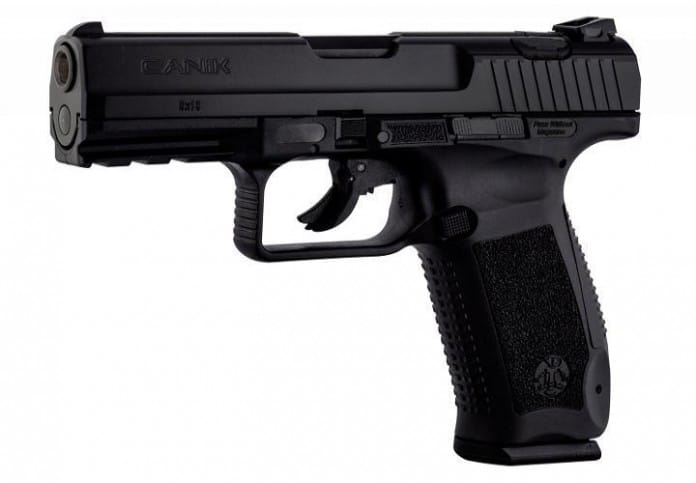 Identifying the best-selling entry-level 9mm handguns is tough. The best seller in one store was not the top gun for the next. But the three listed here were darn good sellers according to the retailers we interviewed.

The Canik TP9SA, imported by Century International Arms, is a Turkish-made striker-fired semi-automatic 9mm handgun with a polymer frame. It retails at Scottsdale Gun Club for just under $300.

It’s a brisk seller because of the quality of the product and relatively low price. With a surprisingly nice trigger, cold hammer-forged barrel and three-dot drift-adjustable rear sight, it comes with two 18-round magazines, interchangeable backstraps and a holster.

There were no malfunctions during a test session with the gun, and it was comfortable to shoot.

Ruger’s striker-fired SR9 comes with either a black or stainless slide and two 17-round magazines. It has adjustable three-dot sights, an ambidextrous thumb safety, and a polymer frame with a reversible insert to make the backstrap flat or curved.

The grip frame is surprisingly small in circumference for a double-stack handgun. The trigger pull was good and I had no malfunctions in testing, but I found the thumb safety hard to manipulate. MSRP is about $530, but at Legendary Guns the price tag was in the mid-$400s.

Some people love the Hi-Point C9, and it sells very well with an MSRP of $179.

This is a polymer-framed gun with a steel barrel, eight- or 10-round magazine, adjustable sights and a very heavy slide made of an aluminum and zinc alloy called Zanak. The C9 is a blowback-operated gun, so the slide needs to be heavy, but it proved to be pleasant to shoot.

Kelly Walton of MKS Supply who distributes the gun says that Hi-Point offers a lifetime warranty yet has a return rate of only about 2 percent.