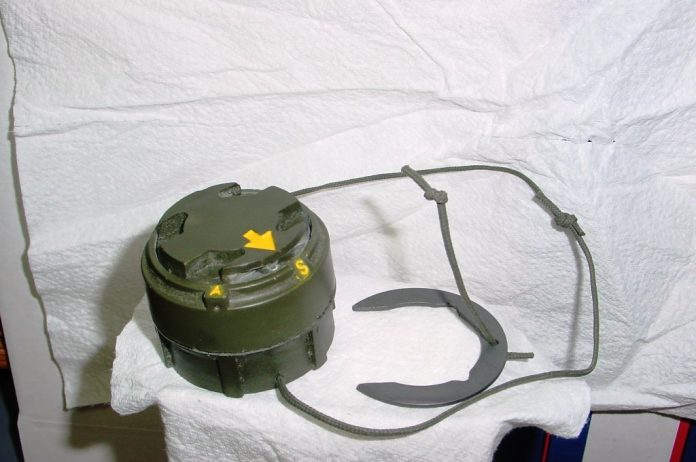 This article will speak about two vital weapons that served U.S. Special Forces during their service in the Vietnam War. They were the M-14 Anti-Personnel mine, more commonly known as the “Toe Popper,” and the V40 Mini-Fragmentation Grenade. Over the course of the conflict, these miniature terrors drew much blood against the North Vietnamese Army (NVA), and Viet Cong (VC), with the V40 even serving beyond into the Iraq War as an effective room clearer.  Though both are officially gone now from active duty, they possessed a lethality that outweighed their physical appearances.

The first weapon, the M14 mine, looked like a small, thick disc that was olive drab in color, 2.2 inches in diameter and 1.5 inches in height. It contained 1 ounce of Tetryl explosive to make up its 3.5 ounce weight.  This lightness came from its mostly plastic construction, and, to set it off, required a pressure of between 20 to 35 pounds.

The mine could be placed in a shallow hole, under a leaf or in the open if in a hurry. Special Forces teams often used this last tactic when breaking contact or protecting a perimeter at night.

Field manuals showed that to activate the mine a soldier would remove a base plug and screw in a detonator. After setting the mine in position, its pressure plate was rotated from Safe to Armed using a special spanner. The last step was to remove the safety clip. At this point the mine was armed.

An unlucky N.V.A. or V.C. who happened to step on the M-14 often had half or all of his foot blown away.  Due to its small explosive, death rarely occurred, instead it left the victim maimed for life.  Many ended up this way because during missions, Special Forces teams sewed several of these along their egress routes and often more than once, an explosion sounded in the distance that bled and slowed their pursuers, as well as worked on them psychologically.

After the war, the Toe Popper fell out of favor, but with so many in stock, the U.S. decided to maintain a supply of over 1.5 million for use on the Korean peninsula, if necessary.

Another curious weapon carried by the Special Forces didn’t come from the U.S., rather, it came from the Netherlands. Called the V40, the design truly fit the profile of a big thing in a small package.

With an olive drab coloration, at 2.6 inches high, 1.6 inches in diameter and weighing just 4.8 ounces, the grenade gave the appearance of a modified golf ball. A safety spoon like that found on standard grenades extended along its side and when released, caused the fuse mechanism to detonate the grenade four seconds later. The fragmentation pattern came from 326 squares pressed inside the metal casing and had a 16 foot lethal radius.

Due to its small size, users often carried three, being the weight of one standard grenade, and used them to good effect against confined areas such as huts or tunnels. No one ever called it by its designation, instead referring to it as the Mini-Frag.

V40 continued being manufactured until 1984. Thousands remained in inventories worldwide, and the U.S. used them again in the Iraq War up until 2008.  And now, though the V-40 is gone, the Mini-Frag concept remains desirable and the German defense company Rheinmetall continues to advertise a Mini-Frag as part of its hand grenade line.

With the enemies blood, they made their mark.