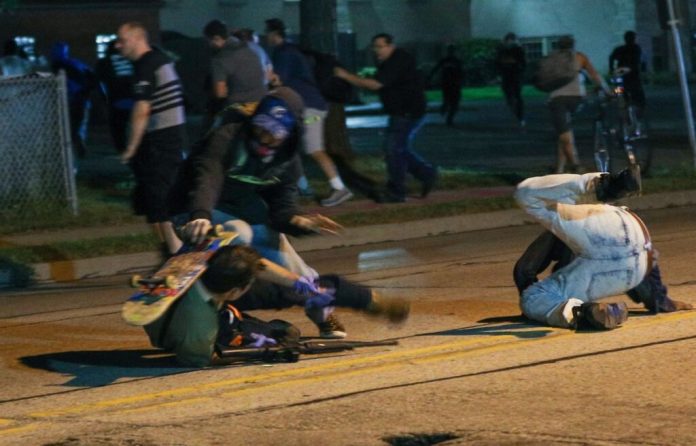 [Ed: Now some time has elapsed since the Rittenhouse verdict, there are useful lessons to be learned. This was originally published by SCOPE-NY November 29.]

The left is very critical of gun ownership, but they don’t seem to know even the simplest, most basic things about guns.  Kyle Rittenhouse’s trial filled the news the past few days, but there are some things that haven’t generally been discussed, possibly because the leftist media doesn’t know – or even suspect – and more likely wants to ignore them.

Rittenhouse’s main sin in the eyes of the left – now that he has been acquitted – was that he carried an AR15, the infamous “Assault Weapon”.  A question for all you gun owners: if you were unarmed, would you attack someone holding an AR 15?  Of course not!  You could get killed!  No one in the media has brought up that Rittenhouse’s attackers must have had a death wish.  (Actually, one of the persons killed had just been discharged from a hospital after a suicide attempt.)

But wait, one of those killed did hit Rittenhouse with a skateboard.  How smart is it to bring a skateboard to a gun fight?

One guy jumped over Rittenhouse while trying to kick him.  Kyle took a shot at the jumper while stretched out over him, and missed.  Had he not missed, that wound would have been interesting.

Unarmed, would you bravely take on someone holding and AR15 to save others?  Perhaps.  But that rationale “doesn’t hold much water” in this case.  How much protection did the crowd need from someone running away from them?  If the crowd was really worried about their own safety, they could have just stopped chasing the guy armed with an AR15.

The media accuses Rittenhouse of being a vigilante.  Do vigilantes run away from the people they want to kill?

Then there is the prosecuting D.A. who pointed the AR15 at the jury with his finger on the trigger.  Picture yourself sitting in the jury box when he pointed the gun at you:  what would you have done?  What would you have had to say to the D.A.?  Obviously, he was a graduate of the Alec Baldwin school of gun safety.

The media questions why Rittenhouse had to travel 19 miles to get from his house to Kenosha but doesn’t ask why Grosskreutz traveled 42 miles to get to Kenosha.

When all else fails, the Left charges racism and that Kyle is a white supremacist.  You might reasonably respond, “But Rittenhouse and the three people he shot were all white”?  Not to be outflanked, the Left says it is the judicial system that is racist.  (Democrat Representative Cori Bush, a Black Lives Matter activist claimed, with no evidence, that the judge, jury and defendant were all white supremacists.)

But Bush and that same Left ignores the virtually simultaneous trial of Andrew Coffey IV, a black man who was acquitted of murder and attempted murder by reason of self-defense.  Coffey shot at sheriffs during a drug raid on Coffey’s house during which Coffey’s girlfriend was killed.  (The raid was based on “drug complaints and sales” and police found crack cocaine and marijuana, so there is no issue of a mistaken raid.)  Coffey is a four (4) time convicted felon and it was illegal for him to possess the .45 caliber handgun he used.  He was convicted on the charge of a felon possessing a firearm.  (Wow, that was a tough decision!)

A black, convicted felon, claims self-defense for using an illegal firearm to shoot at a sheriff’s deputy, who was serving a legal warrant, and the “racist” judicial system finds him innocent.  Cori Bush and the media find nothing worth commenting on there.  But according to Bush and the media, a white shooting three other whites is racism and white supremacy.

How did the media describe the three people shot by Rittenhouse?

Anthony Huber was “a happy and laid-back guy…a really sweet person…always had a smile on his face.”  The leftist media usually omitted any reference to his also having convictions for strangulation and suffocation and false imprisonment in a domestic abuse case.

Gaige Grosskreutz was variously described as a part of a social justice group, a volunteer medic at Black Lives Matter protests and a senior at Northland College.  Not mentioned is that he has a record of criminal arrests going back to 2010, a juvenile record that is sealed and other charges currently pending. There was never a mention of Grosskreutz carrying a concealed firearm without a valid concealed carry permit, to which he testified had expired.

At the time of the incident, Joseph Rosenbaum was pending charges in Wisconsin for domestic abuse and jumping bail. He was convicted in Arizona in 2002 for child molestation charges, for which he was sentenced to 14 years in prison.  Mercifully, the media couldn’t find anything nice to say about him but, in many cases, they couldn’t find anything bad worth telling the public about, either.

–Tom Reynolds is the president of SCOPE-NY.

All DRGO articles by Tom