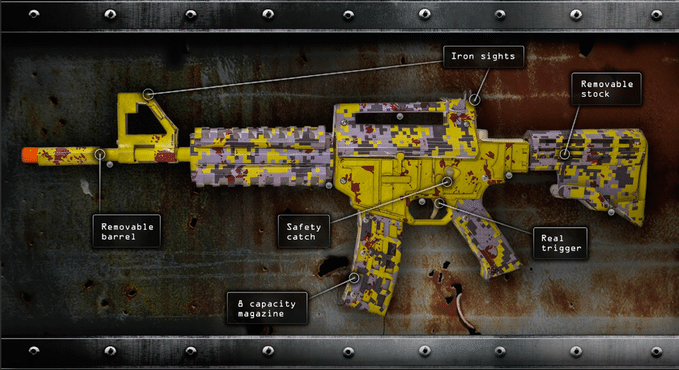 This Spring has been a good season for crowdfunded projects with success stories all over the place, and now we can add PaperShooters to the list. PaperShooters turned to Kickstarter for their project and has more than exceeded their target in just a couple of days. That means backers are guaranteed to get their rewards, in this case, functioning paper wad-shooting carbines.

The PaperShooters goal was never even necessary to get these kits made, it’s actually to raise funds to advertise their fully in-production models. The M4-style kit is designed to shoot reloadable “soft splat” ammo made from 100 percent safe paper. The guns are intended for target-shooting but won’t cause harm if there happens to be a friendly fire incident now and then.

Designed in London and built by an experienced toy manufacturer in Hong Kong, the PaperShooter is intended for kids 14 and up around the world. The kit includes everything needed to make, load and fire the PaperShooter carbine as well as decorate it with a colorful “zombie slayer” cardboard camo skin.

Other cardboard skins will be offered down the line once the initial run of orders is filled. All of the pre-production work has been taken care of, they just need to pack the guns and ship them. Delivery is expected to begin in July of 2015, right around the corner.

The kits start at around $45 — actual prices are in pounds and subject to change — which includes a blaster, eight reloadable shells, 50 rounds of pre-made ammo and molds to make more. Additionally each kit comes with a target signed by the designers.

Additional rewards including multiple kits, extra magazines, more ammo and more can be found on the PaperShooters project on Kickstarter, like 10-packs for people looking to start their own little platoon as well as retailers looking to get a jump on the first round of production.

The team also has five spots — currently four remaining — at about $7.500 that includes an all expenses paid trip to Hong Kong for a factory tour, tons of PaperShooters swag and even chance to workshop the Mark II blaster with the devs. You can see how they’re assembled in this time-lapse video.

Whether you know someone with a birthday coming up or just want a new toy for the kid inside you might want to check out the PaperShooters project.