Tiny Estonia, who share a long and increasingly tense border with Russia, uses a force of volunteer unpaid citizens– equipped with their own military arms– to hold the line.

The Estonian Defense League, a militia independent from the government, is made up of over 15,000 members, making it several times larger than the 6,500-member official Estonian Defense Forces.

Stationed in every part of the country the League is ready at a moment’s notice to sally out and repel possible invasion from unnamed neighbors. It’s the largest military force in the region and members vow to put up more of a fight than they did when the Soviet Union took over the county in 1940 and remained for decades.

Earlier this summer Vice News spent some time in-depth with not only the minutemen of the League but also those on both sides of Estonian politics and the above video shows some interesting footage of their training and doctrine.

It seems Estonia is very down with the concept of civilian use of military-style arms.

While gun rights are more restrictive in the country than in (most of) the U.S., for instance registration is required as is mandatory gun licensing, Estonia’s firearms laws are still more progressive than in Western Europe and the concealed carry of handguns is allowed for those with the proper license as is ownership of semi-autos which are banned in many EU countries. League members, of course, have access to a wide variety of military grade weapons.

Sure, Estonia has no illusions about stopping an all-out Russian incursion, but they just have to slow it down enough to allow fellow NATO members to apply action or rush reinforcements to the region and they plan to do so by putting a rifle behind every blade of grass.

“If Russia knows that attacking Estonia is not a walk in the park, maybe Russia will think twice,” says a commander.

Speaking of which, check out a recent NATO exercise with the League as part of Operation Hurricane in the video below.

With so much firepower at the hands of your everyday civilian, its hard to sell the prospect of being a member of the League because you want to hunt ducks.

But then again, back here in the states we know that Washington didn’t cross the Delaware to get to a duck blind. 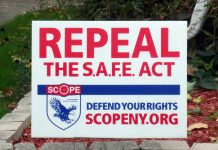