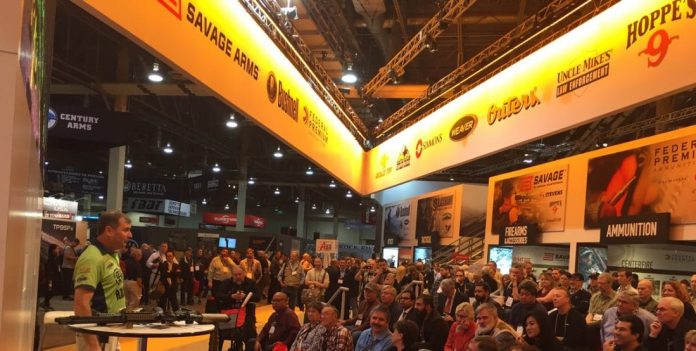 In 2008 and 2012 the firearms industry saw a surge in both gun and ammo sales thanks to the presidential election, and while this cycle is no different for gun sales — in fact, this maybe a record year — ammo is a different story.

Mark , chief executive officer of Vista Outdoor, a conglomerate of shooting and outdoor brands. He said consumers just aren’t buying up ammunition like they had in those years. “As you’ll recall, we were out of stock,” he said during a conference call with investors last week.

He thinks consumers built up a vast inventory at home and are still feeding off of it, so the demand isn’t as high. “I personally believe that a lot of consumers over-stocked … pulled that ammo as quick as they could off those retail shelves and took it home and put it in their own basement,” he said.

Touching on gun sales, he said consumers are mostly buying handguns and AR rifles, which none of Vista’s brands manufacture. However, production of ammo for those types of firearms — 9mm and .223 — is at capacity. “If I had more 9mm, I could sell it. If I had more 5.56 and .223, I could sell it,” he said.

For second quarter earnings, Vista reported $342.8 million in sales from the shooting sports, an increase of $10 million from the year before. Vista’s brands falling in that category include gun maker Savage Arms and several ammo makers like Federal Premium, CCI, Blazer, Speer, and American Eagle.

Compared to gun sales, the federal background check system, the industry’s key indicator for sales, showed an increase of 15 percent for total checks in the past four months. According to figures published by the National Instant Criminal Background Check System, six months into 2016 has netted 32 percent, or 3.4 million, more checks than 2015 and continuing a pace for the biggest year on record.

Competitor Winchester Ammunition, owned by chemical giant Olin Corp., reported last month an overall decrease in ammo sales compared to last year. For the quarter ending June 30, the company raked in $181 million in sales, down by $13.2 million from 2015 and $8.2 million six month into the year.

With sales down, Olin’s management thinks ammo demand this year will follow seasonal trends and sales will bounce back in hunting and holiday shopping seasons.

DeYoung admitted politics has affected consumers’ decision to buy handguns and AR-pattern rifles. “Certainly the candidates who are on the stump are pounding the stump on Second Amendment issues,” he said and referenced Democratic presidential candidate Hillary Clinton’s sweeping gun control proposals. He added it only makes sense that consumers also buy ammo for those firearms.

Mike Fifer, CEO of Sturm, Ruger & Company, which entered the ammo market last year, also dismissed describing sales this year as surging, but was hesitant to credit any increase directly to anti-gun politics. He praised his company’s fundraising efforts for the National Rifle Association and repeated elements of the organization’s stump speech characterizing Clinton as wanting to “abolish” the Second Amendment.

Ruger reported a 19 percent increase in sales for its second quarter, putting sales at $140.1 million and $341.1 million six months into the year. Gun sales made up 99 percent of all Ruger’s sales that quarter.