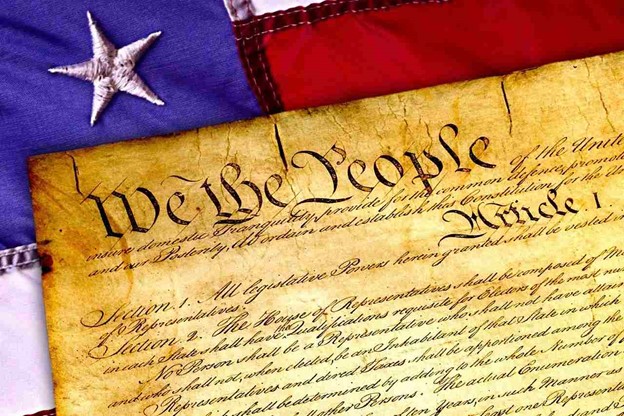 [Ed: Cam Edwards first posted this October 17 on BearingArms.com. It is a strong statement about what the American Constitution is and how it ought to be respected in use. We republish it here with permission, slightly edited in format for DRGO.]

The left’s descent into malevolent and feigned ignorance on the topic of judicial originalism took another plunge downward into the abyss on Friday with the publication of Jamelle Bouie’s latest column for the New York Times, entitled “Which Constitution Is Amy Coney Barrett Talking About?” Bouie claims that in actuality, we really have two Constitutions; the one we all know about that was ratified in 1787, and the Constitution that came about as a result of the Civil War in the 1860s:

“Barrett’s Constitution is the Constitution of 1787, written in Philadelphia and made official the following year. That’s why her formulation for originalism rests on ratification, as she states at the outset of a paper she wrote called ‘Originalism and Stare Decisis‘.

“Many Americans think the same, identifying the Constitution with the document drafted by James Madison to supplant the Articles of Confederation and create more stable ground for national government. But there’s a strong argument that this Constitution died with the attack on Fort Sumter on April 12, 1861.”

There’s an argument, but I wouldn’t call it a strong one. After all, the Constitution wasn’t replaced or repealed as a result of the Civil War. It was amended, which is the proper way to change the Constitution (as opposed to declaring it a “living, breathing document” that changes with the times without any actual amendments to the document itself):

“Whereas the Constitution of 1787 established a white republic in which the right to property meant the right to total domination of other human beings, the Reconstruction Constitution established a biracial democracy that made the federal government what Charles Sumner called the “custodian of freedom” and a caretaker of equal rights. To that end, the framers of this “second founding” — men like Thaddeus Stevens, Lyman Trumbull and John Bingham — understood these new amendments as expansive and revolutionary. And they were. Just as the original Constitution codified the victories (and contradictions) of the Revolution, so too did the Reconstruction Constitution do the same in relation to the Civil War.”

Take the Fourteenth Amendment, for example. Bouie’s correct that the amendment makes the federal government a caretaker of rights, as opposed to the Second Amendment, which specifically limits the power of the federal government. What rights, though? Bouie claims that the “Second Constitution” fundamentally differed from the actual Constitution ratified in 1787, but in actuality, neither the Thirteenth, Fourteenth, or Fifteenth Amendments created new rights. They extended the protections of existing rights to a class of Americans that had previously been denied their liberty:

The most radical part of the Fourteenth Amendment may be in its recognition that individual rights need to be protected against encroachment by the states and local governments as well as by federal authorities. However, it’s still in line with the idea behind the first ten amendments; that individual citizens possess certain rights that may not be infringed upon or violated by governments.

Originalists have no problem with constitutional amendments. In fact, it amuses me to see politicians claim that judicial originalists like Amy Coney Barrett only rely on the Constitution as it was written in 1787, and then complain about originalist interpretations of the Second Amendment, which wasn’t ratified until 1791.

In the McDonald case that struck down Chicago’s ban on handguns on the grounds that the Second Amendment protects an individual right to keep and bear arms from infringements by any layer of government, Justice Samuel Alito buttressed his argument in part by citing the congressional debates over the Fourteenth Amendment:

“It is clear that the Framers and ratifiers of the Fourteenth Amendment counted the right to keep and bear arms among those fundamental rights necessary to our system of ordered liberty,” Alito said. “A provision of the Bill of Rights that protects a right that is fundamental from an American perspective applies equally to the Federal Government and the States.”

Alito has described himself as a “practical originalist,” so clearly originalists like Judge Amy Coney Barrett have no problem looking at the Constitution not just as it was written in 1787, but as it has been amended over the past 233 years. The real issue is with intelligent pundits, politicians, and influencers playing dumb about what originalism really means in order to falsely portray Amy Coney Barrett as someone who would take Americans backwards, rather than a judge who would ensure that the Constitution continues to serve as a protection for their individual rights.

— Cam Edwards has covered the 2nd Amendment for more than 15 years as a broadcast and online journalist, as well as the co-author of “Heavy Lifting: Grow Up, Get a Job, Start a Family, and Other Manly Advice” with Jim Geraghty. He lives outside of Farmville, Virginia with his family.