Anyone who has even a passing interest in armed self-defense has likely heard an instructor, gun counter prophet, friend, lawyer, or even a cop speak on the subject of “What do I say after a shooting?” . They usually recommend never to speak to police immediately following a use of force incident. Their reasoning likely revolves around real world evidence, or reasonable conjecture surrounding the fallibility of the human memory, especially on the way downhill from an adrenaline dump. Greg from Active Response Training goes into detail on it in the link above, but the jist of it is that it is indeed the best course of action, until it’s not.

Supporting evidence suggests that your composure, recall, physical function and general state of mind are going to be unusually altered by the experience of having shot, or at least shot at, someone who you genuinely believed was attempting to end you. This is a chemical/hormonal response that you have no control over, and cannot “power through” or otherwise intentionally defuse. As explained in excruciating detail here, a perceived threat to life produces the same stress response in all mammals.

The first stage of which is relevant to our discussion, which breaks down mainly to the adrenal gland dropping a massive load of Glucocorticoid hormones (GCs) into your blood, where they can get into every part of you. “Circulating GCs act on a variety of tissues to mobilize energy stores, induce lipolysis and proteolysis, potentiate vasoconstriction driven by the ANS, suppress reproduction, and alter stress-related behaviors, to allow homeostasis”. This means that you

-Start cannibalizing any stored fat and protein, as well as available sugar, for immediate energy
-Crank your blood pressure to ensure constant oxygen supply to any cells that will be needed for fighting or flighting
-Kill the lights in the baby factory
-Get twitchy and stop processing information the same way.

What we mean by that last one is that normally, information about the outside world gets sent to your neocortex “the thinking brain”, which processes it and decides what to do about it. After which it passes it along to the amygdala “the emotional brain”, which decides how you feel about it. The amygdala might make you go “awww” or “WTF” depending on the particular input. Under the influence of GC’s, your amygdala and neocortex get the data at the same time, and being the emotional one, the amygdala will kick the neocortex out of the decision-making process entirely if it decides you’re about to get shot.

This means that you can make extraordinarily fast decisions, and react much faster than usual, but that’s mainly because you aren’t actually thinking: You’re doing whatever the totality of your life experience and training suggests to your emotional brain that you should do. For added fun, the neocortex is also responsible for cognition, spatial reasoning, sensory perception, and language. So until the full cycle of keep-me-alive-drugs has passed through you, which can take up to half an hour, you’re basically high, and should consider yourself impaired when it comes to making a decision about what to say to who during that time.

Now, with all that said, if there is a critical component to the articulable threat to your life, it may be worth the risk of relaying it to the officers on-scene. Has the environment changed dramatically somehow that might make your decision seem unreasonable? Maybe an accomplice rolled his buddy over before taking the gun and running, making it look like you shot an unarmed person in the back? Certainly that would be likely to come out in court, but who wants to go to court? That might be an unlikely scenario, but so is getting into a gunfight in the first place.

Most importantly, if the first time you’re wondering whether you should hold your tongue is in the moment, while you’re flying high on your brain’s own Peruvian marching powder, you’re going to be worse off for it. Think about these things now, talk about them with friends, train with qualified instructors, and read great write-ups from experienced people like Greg. If you do that, when you find yourself stoned on survival and faced with making the choice to talk without representation, you’ll have an advantage in making the right call. 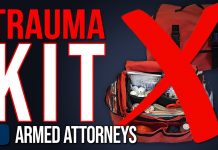 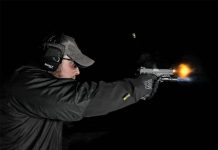