America has this weird idea about arming insurgency forces with disposable weaponry. Granted we didn’t invent the concept, but we sure did make it our own. Well, we did before it became cheaper to buy Kalashnikovs and issue them en masse. Most of us know about the Original Liberator from World War 2, but few know about its successor from 1962, the Winchester Liberator. While it shared the Liberator namesake and the idea of arming an insurgency with a cheap weapon, the similarities end there.

The Idea Behind the Winchester Liberator

A man named Robert Hillberg dreamed up the Winchester Liberator. He named it the Hillberg Insurgency Weapon. What do you do when you have a new gun design? Well, you approach a big company to try and get it made.

Hillberg approached Winchester with his idea. The suits at Winchester liked his idea and saw clear profit potential. Communism spread like a plague and America backed guerilla forces to them off. So what kind of firearm would the new Liberator be? 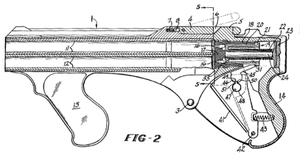 Pistols are tough to use without training, and the same could be said for SMGs. Plus, making either cheaply rarely lead to making them reliable. One thing you can make cheaply is a shotgun. Shotguns are easier to get hits even when you factor in minimal training. A spread of buckshot offers higher hit potential, and four loads of it quadrupled your ability to kill.

Ambushes were the realm of the Liberator, not gunfights. Imagine being a guerilla hiding in the bush. America armed you with a Winchester Liberator. You’re not poorly trained, you’re not trained at all. You and your team ambush a squad on patrol and each empty four rounds of buckshot at the target.

Every one of you flinches as you pull the trigger because this is the first or second time you’ve ever fired a gun. Shot placement matters and you can’t shoot, but it’s okay you’re throwing dozens of pellets at them. You might not kill everyone, but you’ve made hits. You’ve taken men out of the fight.

Best-case scenarios you can snag better weapons. Worst case, you wounded and killed some and now you flee into the jungle to do it again tomorrow.

A shotgun could be deadly, reliable, cheaply made, and could be very compact. The reason for four barrels gave the gun a significant advantage. A four-barreled shotgun with a rotating firing pin was more compact than a pump-action and offered more firepower. The gun fired as fast as a semi-auto without the need for a complicated semi-auto system.

The Winchester Liberator In Living Color

Hillberg built a fully wooden variant designed as a proof of concept. It featured a forward and rearward grip and no stock. The massive trigger allowed for the long firing pin rotation between tubes. Originally the Mk1 used a speed loader-like packet of ammunition that was proprietary. However, this proved to be problematic, and Winchester ditched the idea.

The Mk2 Winchester Liberator provided a firing model of the gun. This model integrated a trigger guard into the system that could be removed if needed. The Mk2 integrated a removable stock. Pistols and SMGs are tough to use without training, but a pistol grip only shotgun is much more difficult to wield. The stock was a wire type and likely provided a sharp punch to the shooter due to recoil. The gun opened like a break open derringer and exposed all four barrels for loading and unloading.

The Mk2 Winchester Liberator was made from castings but incorporated steel for the barrels and other critical components. Using magnesium casting turned out to be an issue. Often the cast magnesium would cause the barrels to have issues aligning when fitted into the molten magnesium—making them successfully also made them more expensive to produce. Mk2 guns came in 16 gauge only.

The Mk3 changed things slightly. Building the Mk3 was supposedly simpler, with casting for the back half of the gun only. Winchester ditched magnesium for the front portion of the gun. Instead, a steel plate held the barrels together. The lockup mechanism was also simplified, and two different models were made—one with a side opening locking device and the other with a top tab. 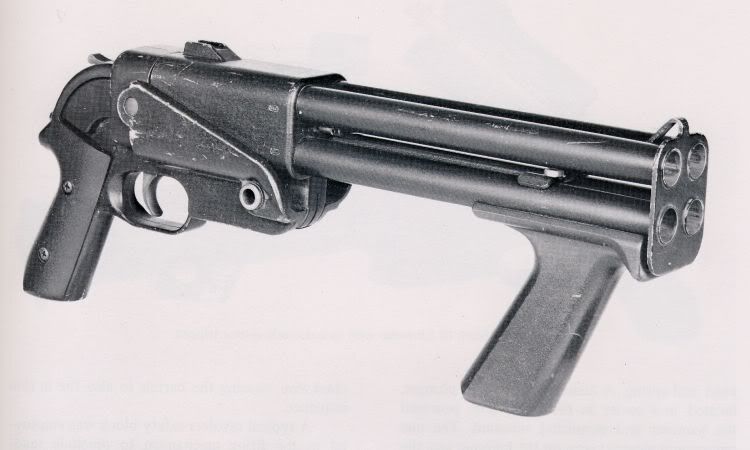 The Mk3 came in both 12 and 16 gauge. It utilized a more conventional trigger assembly and came with and without a stock. An exposed hammer appears to have allowed shooters to manually cock the weapon as needed. Heck, the Mk3 Winchester Liberator even came with sling points. It was the most refined variant and proved reliable.

The Fate of the Winchester Liberator

The Winchester Liberator never took off in terms of its intended purpose as an insurgency weapon. The war in Vietnam had escalated significantly and now we armed guerillas with M16s and sent troops to fight beside them. There was no need for a cheap shotgun.

Winchester instead tried to market the weapon to police and correctional agencies, as well as military forces. However, it was never purchased in any great numbers, or possibly any number at all. 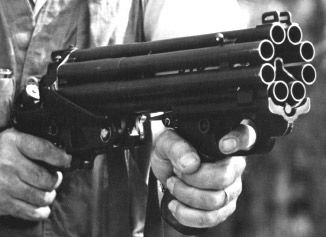 Hillberg took the gun to Colt, who adopted it as the Colt Defender and made it an 8 barrel gun in 20 gauge. However, this gun also failed to attract any interest, and only a few production models were made.

Robert Hillberg started young and produced several prototype firearms before he was ever hired by a firearms company. This reportedly includes a 357 Magnum SMG. Imagine that beast of a gun. Colt offered him a job after a successful display of the gun. He worked at numerous companies designing everything from firearms to aircraft parts.

Robert Hillberg loved multiple barrel weapons. He invented the Winchester Liberator, the COP 357 derringer, and the Colt Defender. Hillberg served as the head of research and firearms development at High Standard back in classic High Standard days.

Robert Hillberg designed the Whitney Wolverine, helped with the Browning BPS shotgun and the M60 machine gun. Prolific describes him best and he contributed to a number of projects. Most of his designs were more successful than the Winchester Liberator.

Hillberg deserves appreciation for being able to think inside and outside the box. He designed guns like the Winchester Liberator, the Whitney Wolverine, and the Wildey magnum. He made fascinating firearms and seemingly pushed the status quo forward. Sadly he doesn’t get the attention he deserves. Hopefully you can walk away from this article with respect for Mr. Hillberg.