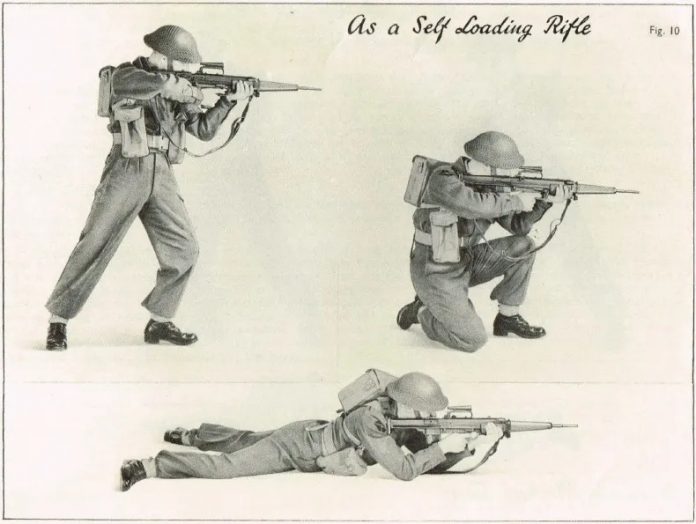 Those pesky Brits sure do love their bullpup rifles. That makes some sense seeing as how it was a Brit who designed the concept. Professor Richard Potter reportedly designed the first British bullpup rifle as a massive target gun in 1860. This massive rifle weighed 13 pounds and fired a .60 caliber projectile. That might’ve been the first, but as well all know, it wasn’t the last.

The British would go on to be huge proponents of the bullpup rifle. They stumbled into some odd and unique ideas that were often ahead of their time. Today, we will dive into the world of British Bullpups and examine their evolution in the British Empire. To start, we need to go to 1866 with the first repeating bullpup rifle.

What’s fascinating about the Curtis rifle is that it’s a pump-action, drum-fed rifle designed in a bullpup configuration. The rifle is fired much like a portable recoilless rifle. It mounts on the shoulder, and a hinged stock sits in front of the drum. The user folds the stock down to brace it against the shoulder.

The drum held either 12 or 13 rounds of .32 WSL. It’s not a detachable drum and would be manually loaded before firing. At the front of the gun sits a bolt handle that resembles something you’d see on a traditional bolt action rifle. 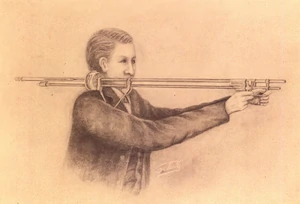 This bolt handle is what the firing hand would grasp, while the support hand wrapped around a loop forward of the trigger. The weapon was striker-fired, and a trigger linkage in the form of a cable allowed the weapon to release the striker.

Interestingly enough, the only reason anyone remembers the design is that Winchester built one to win a lawsuit. They were being sued over the pump-action design of the Model 1900 and 1903. Winchester sent men to Europe to find earlier patents and prove to the court they weren’t infringing on the pump-action mechanism. It’s a British bullpup by way of American construction.

In 1902 the first Thorneycroft carbine came to be. The rifle was 10% lighter than the standard Lee Enfield rifle and about 7.5 inches shorter. Like most rifles at the time, these were bolt-action guns. They chambered the British .303 British round and fed from a 5 round internal magazine.

The rifle was rejected from military trials due to its excessive recoil and awkward ergonomics. Over time Thorneycroft developed several more prototypes to improve the design, including the very Enfield-looking models of 1903 and 1907. None ever saw adoption.

Did you think you’d only see one pump-action British bullpup rifle on this list? Ha, well, guess what? Here’s a second! The SREM-1 or Sniper Rifle Experimental Model 1 takes the cake as a second. Enfield designed the SREM-1 during WW2 as a prototype sniper rifle for British troops. The design is a bit nutty.

The pump of the firearm is the firing grip. After firing, the user would pull the grip rearward to eject the empty casing and push it forward to load the next round. The Brits chose the heavy-duty 7.92 Mauser round, and it used a 5-round internal magazine. The SREM-1 began development in 1944, and development stopped at prototypes with the war almost over.

After WW2, the Brits wanted a new, more modern infantry rifle, and surprising no one reading this article experimented heavily with bullpup rifles. The Brits wanted to standardize on the .280 round and commissioned a variety of rifles from Enfield but also from Birmingham Small Arms. BSA produced a prototype rifle.

This British bullpup was a select-fire rifle in .280, and that’s about all we know about it. Oddly, the gun appears to have two triggers, with one forward of the grip and one rearward. Why, I’m not sure, perhaps for hip firing? Also, the grip appears to be the gun’s magazine, making ergonomics a bit awkward.

In the mid-1940s Enfield Armory began developing a series of bullpup rifles for the British military. The various rifles were all competing designs. The EM-1 and EM-2 used the .280 British cartridge, and each was a bullpup carbine. The EM-3 used a .303 rimless cartridge, and the EM 4 used a round known as the .27 Broadway Trust.

The EM-1, nicknamed the Cobra, used a roller-locked short-recoil design. Modularity seemed to be the key behind the EM-1’s design, focusing on the military being able to turn the EM-1 into an assault rifle, a marksman’s rifle, or a support weapon. It’s fairly ahead of its time in that regard and heavy at 10 pounds unloaded. The EM-1 used an optical sight mounted on the carry handle which was fairly advanced for the 1940s.

The EM-2, nicknamed the Mamba, used a gas-operated, short-stroke gas piston system. The designers aimed to produce the EM-2 as a general-purpose assault rifle heavily relying on accuracy with a max range of 800 meters. The EM-2 was a lighter 8 pounds. Like the EM-1, it used an optic instead of traditional iron sights. This was declared the best British bullpup in the Great British Bullpup show in the 1940s.

The EM-3 and EM-4 didn’t make it very far and didn’t get cool nicknames. The EM-3 would chamber a round known as the .303 rimless, which never existed. The design would eject cartridges over the shooter’s shoulder, although only a single non-working mock-up was produced.

The EM-4 was another British bullpup rifle never produced. It was designed by Sir Dennis Burney of the Broadway Trust company. It’s an odd action that’s principle was an enlarged chamber that the gases expand into and then exhaust through the barrel using a high-low system. The design seems to move the barrel, bolt, and magazine.

I don’t quite understand it, and not many visual aids exist. The rifle used a 7mm projectile and didn’t seem to make it out of the prototype stage.

Break for the FAL

Eventually, the EM-2 was adopted…for all five seconds or so before the Brits went to the FAL, thinking the Americans would do the same. We all agreed to standardize on the 7.62X51mm round and on the FAL rifle. Of course, American pulled a fast one and swapped to the terrible M14.

Throughout the Cold War, the FAL reigned supreme. However, in the mid-1980s, the Brits finally got their bullpup rifle with the SA80 family, which is a whole different article for a different time. It took 40 years to get, and they don’t seem to be willing to get rid of it anytime soon. The bullpup is as British as Earl Gray and calling cookies biscuits.