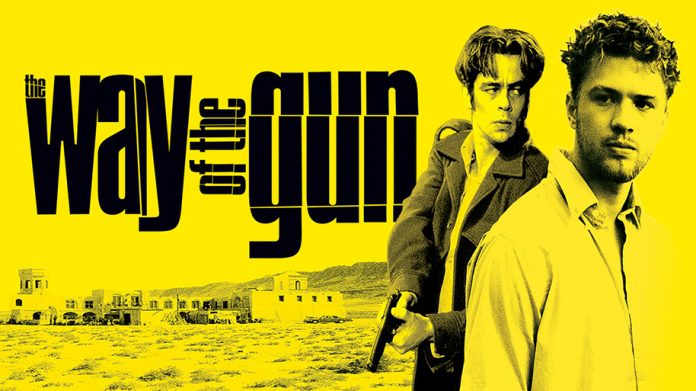 Some time ago, I wrote a piece about Larry Vickers’ (of Larry At The Movies) and his analysis of Sicario. And then, because this is the internet, I started clicking things that could be clicked, finding my way to Larry’s breakdown of the Mexican brothel shootout in The Way of The Gun. The film, starring Benicio Del Toro, Ryan Phillippe, Juliette Lewis, and James Caan, is, in short, a Kidnap for Ransom sort of affair.

Importantly to Larry and any viewer interested in firearms, this movie came out in 2000 and is definitive for its time. Three-point slings are an excellent case in point.

What Larry had to say

“Back in the day, the year 2000, three-point slings were kind of the cool thing… The problem [with three-point] is that cross-strap doesn’t do anything for you, but it impedes your ability to do stuff like load the weapon, check the status of the weapon.”

So why were they so popular? H&K, it seems. A three-point being factory issued with the MP5 was deemed cool and migrated to M4s and shotguns, etc.

Larry also takes issue with Del Toro’s use of a press-check during the brothel scene, but I’ll come back to this later.

One of my favourite things about watching action/shooter films through the past four or five decades is that the weapons/handling is a timestamp. This is an obvious point, but no less enjoyable for it. So check out The Dogs of War for some great Uzi action, Lethal Weapon for H&Ks, and maybe even The American for some intentional-retro Mini-14 work.

Benicio Del Toro as Longbaugh, with his gone-too-soon Galil. The choice of weapons for these characters was well executed, handgun and long gun alike. That Galil suits Longbaugh like a Remington 870 bayonet lug would suit one of the Gorch Brothers.

But it ain’t just the handling drills or the slings or the presence of a .308 Galil. Coming after the Tarantino revolution and Michael Mann’s Heat, this film attempts – and mostly succeeds – in combining style with substance. It is very much the child of those two somewhat opposing films.

The characters in The Way of The Gun:

Setting The Way of The Gun apart

However, there are many differences between The Way of The Gun and Heat. A notable one is that in Heat is stripped-down purpose. There’s a monastic quality to the way Robert DeNiro’s character, Neil McCauley, handles his AR (later in the film, he is asked, in fact, if he’s a monk). Nothing is wasted; nothing is for show. Counter to this, we get the sense of Del Toro and Phillippe showing the viewer that they know their drills, such as the aforementioned press-check. Ain’t complainin’, just sayin’.

DeNiro as Neil McCauley in Michael Mann’s, Heat. Leanin’ into the carbine.

Vague Bertolt Brecht references aside, The Way of The Gun succeeds in presenting well-executed drills. Case in point is the “moving” scene when our protagonists first attempt the abduction using practical, minimal communication!

I will, however, call out a later scene. Del Toro uses his Galil effectively from high ground in a marksman capacity. Still, at the same time, handguns are countering him at something like 200 yds in what appears to be an indirect fire role. Tiny lil mortars, here they come.

The Way of The Gun was written and directed by Christopher McQuarrie, at the time most well-known for penning The Usual Suspects. Since then, he’s gone on to some big things, such as Live Die Repeat (Yes!!). Back in 2000, you could draw a pretty direct line between the dialogue of The Usual Suspects and The Way of The Gun. The dialogue snaps in both films. From the latter:

“I promise you a day of reckoning that you won’t live long enough to never forget.” and, “I think a plan is just a list of things that don’t happen.” As well as, “A heart is the only thing that has value. If you have one, get rid of it.”

In writing about The Way of The Gun, I’ve focused on specific elements, and this is no accident. However, reading reviews from twenty years ago and more recent retrospective analysis, there is a common theme that with I mostly agree. So, to conclude, here are a couple of thoughts on the film as a whole:

“There’s a good story buried somewhere in this melee, surrounded by such maddening excess that you want to take some home and feed it to undernourished stray movies.”

Scott Waters escaped the North of England as a child and has lived in the occasionally frozen/occasionally fecund land of Canada since then. An epigrammatically jocose former Canadian Infantry soldier who got himself some “higher education”, he became an artist and writer. These days he does some work with aid groups, dips his toes in the Army while continuing to dip his toes in art and writing. As you can see, there is a general “toe-dipping” theme. @militaryart_swaters.