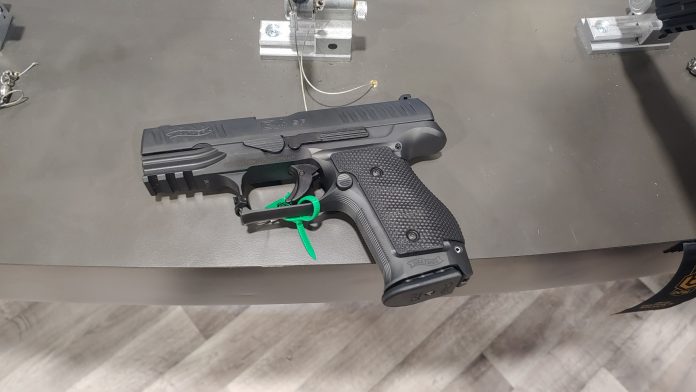 I love guns designed for competition because they are typically insanely easy to shoot. Last year we saw the Q5 steel frame from Walther hit the market and it was an impressive gun. Ergonomics were spot on. It has the brilliant PPQ trigger, and Walther’s famed ergonomics packaged into a steel-framed pistol. Add in a magazine well, red dot compatibility, and well, you have a very capable pistol. A capable pistol for competition, or maybe home defense. For carry, well, you’d have to buy a very good belt and holster combo. However, the Q4 may change that.

Well, sure, probably, but there is plenty of room on the market for a classic steel gun. The ole’ Walther PPQ has the best stock striker-fired trigger on the market. Especially at the standard PPQ price range. The Q4 takes that fantastic trigger and combines it with 39.7 ounces of steel. The end result is a fine trigger with very little recoil after the shot breaks. I’ve been a big fan of the steel frame SIG P series and the CZ series of guns because there is no replacement for steel.

The Walther Q4 is the overall same idea as the Q5 but in a more handy package. If you are like me and like heavy, all-steel guns for self-defense then the Walther Q4 might be for you. While the CZ and SIG guns give me a DA/SA option, the Q4 gives you that consistent striker-fired trigger. It’s nice to see an option in the striker-fired realm for those of us who want big, heavy steel guns.

The Walther Q4 At Range Day

This gun handles like a dream. The recoil and muzzle rise is nearly non-existent. It just jumps a hair between shots. The Walther Range is 15 yards with several different types of targets. One being a hostage target with a small steel popper you can knock from side to side.

I drove the popper from side to side with an easy rhythm. I could transition from side to side and engage it as soon as it cleared the head of the ‘hostage.’ The Q4 made recovery between shots simple and quick and the same could be said about transitioning from left to right.

The Q4 is designed with incredible ergonomics and it quite comfortable. It retains or even improves on the famed PPQ trigger. It’s light and short with minimal overtravel. It’s not a trigger for beginners, but experienced shooters will adore it. The Q4 promises to be an expensive gun, but it’s likely worth every penny.