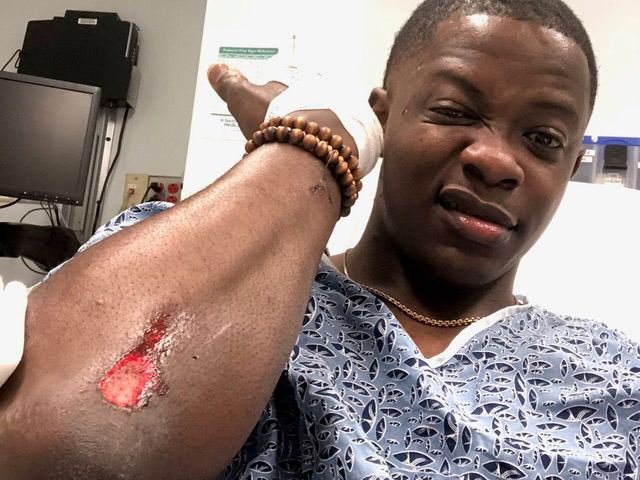 On Sunday morning another mass shooting awoke the nation.

An Antioch Tennessee Waffle House was attacked at 3:23 am by Travis Reinking

Reinking, an Illinois resident, was carrying an AR-15 he had purportedly previously owned but was confiscated after he was arrested by the secret service in Washington D.C. for trespassing in restricted areas. The firearm was allegedly returned to him by his father after it was released to the father by local police some time after the D.C. arrest and later confiscation.

Reinking is a prohibited person. His FOID in Illinois was revoked.

To make the tragedy more bizarre Reinking was naked, except for a jacket, when he open fired killing two outside the restaurant and killing two inside before James Shaw Jr. (pictured), while wounded, yanked the rifle from Reinking and stopped the attack.

Reinking then fled naked on foot into the early morning, leaving his vehicle. He is still at large.

James Shaw Jr, the hero of Antioch, was a man who acted decisively saving his life and the lives of many in the restaurant and perhaps the wider area.

Emma Gonzales, a prominently featured survivor of Parkland, began accusing the NRA of schilling the incident to increase gun sales, alleging they were going to claim that the naked gunman had mental health issues.

Speculating the man who attacked a Waffle House at half past three in the morning while naked, with a previous arrest for trespassing in restricted areas of Washington D.C. allegedly trying to set up a meeting with the president because you do that by sneaking through the White House, might have mental health issues is apparently schilling and projectionist.

But it was absolutely because he was white and male.

She additionally claims that Mr. Shaw’s heroics prove nobody needs a gun to stop a mass shooter and that would hurt Smith & Wesson’s narrative.

I’d hazard that had Mr. Shaw been carrying an M&P Compact he might have been able to act more quickly and with greater equalizing force than waiting for Reinking to stop shooting and then riskily engaging hand to hand.

You do not need a gun to stop a mass shooter… It certainly helps though.

Emma’s assertion is that it is morally superior to attack a homicidally violent and well armed person from a position of extreme disadvantage because carrying or even owning your own weapon lawfully is apparently what caused the attack in the first place.

Her last claim was probably the most outrageous. That Mass Shootings only happen within the gun saturated streets of the United States.

The FBI defines a mass shooting as 4 people killed (not including the shooter). Mass shootings occur in churches, in schools, at concerts, in waffle houses – just about anywhere. Except in other countries. – Emma Gonzales

She must have missed these.

5. 2011 Norway Attacks, 77 Dead <- Attack on a summer camp with a Mini-14 and Glock handgun after an earlier bombing.. oh and it’s in another country.

6. 2013 Kenya Shopping Mall, 67 Dead <- Four NRA Members attacked Westgate Ohio because they owned guns… no wait this was 4 Al-Shabaab terrorists who attacked a shopping mall in Westgate, Kenya. They were shot and killed after a 2 day battle with Kenyan armed forces and unconfirmed Israeli IDF support. Does this hurt Gonzales ‘you don’t need a gun’ narrative? They used a lot of guns.

Ryan Saavedra attempted to correct her assertion. The effectiveness of factual evidence to the gun control advocate is minimal however, we do appreciate the effort though.