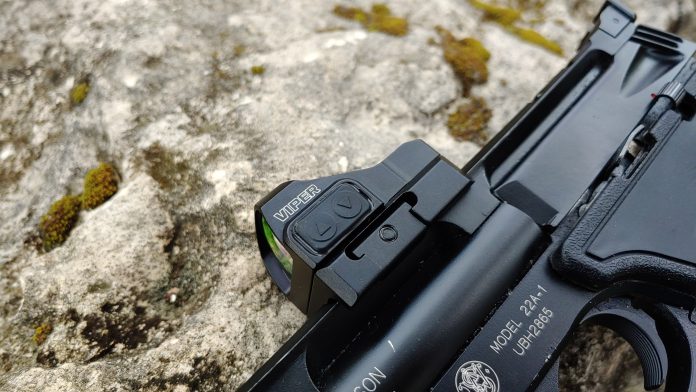 Micro red dots are versatile optics. As red dots, they can be used on any platform effectively. One could argue an optic works best when it’s designed for a specific platform. When the platform is considered, the design can be tailored more and increase the overall effectiveness. The Vortex Viper is an optic tailored specifically to pistols. Vortex produces more than one mini red dot, but the Viper is the only one specifically designed for handguns.

The Viper aims to be ultra-small and compact but still accommodate the standard mini red dot market. It uses the same footprint as the larger Venom and will work on multi-plate platforms like the Glock MOS series. The Viper is 1.02 inches tall, 1.06 inches wide, and 1.81 inches long and weighs only 1.03 ounces. The Viper also has a 6 MOA red dot that’s larger than many mini red dots associated with rifles and perfect for handguns. The 6 MOA Viper reticle is easy to see and fast to acquire. 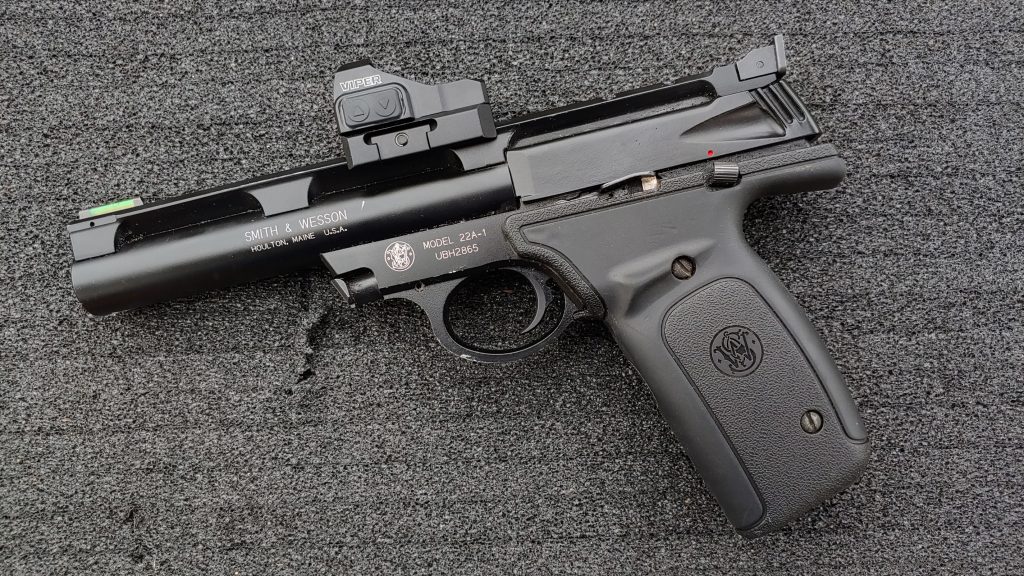 Since handguns are designed for close-range fun, the 6 MOA reticle isn’t too big. On a rifle, a 3 MOA or even 2 MOA reticle is often the preferred option, but handguns work well with a bigger is better mentality reticle wise.

The Vortex Viper is a sturdy optic that is seemingly very well built. The Viper has supportive sides that don’t leave the window hanging free. This reinforced design adds some size to the optic, but that extra size results in extra strength. Handguns are used at ranges where hand to hand fighting could easily happen, so that extra strength ensures extra durability if the fight goes to the ground. 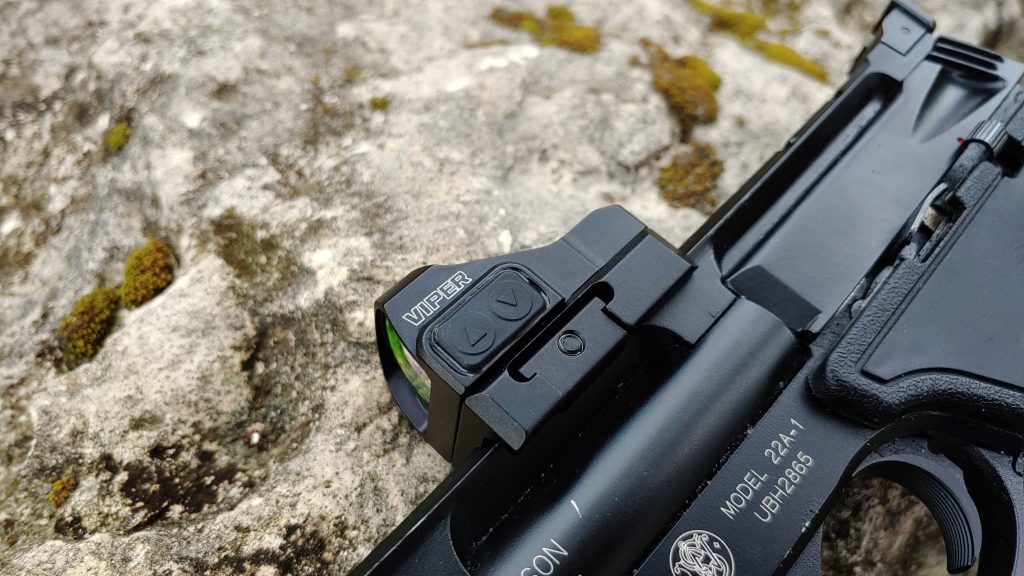 The Viper comes with a Picatinny rail adapter if you are like me and looking to mount this on a less than a tactical handgun.

The buttons are a smart design as well. They take a very deliberate press to activate and won’t accidentally activate when carried via holster. While it seems anti ergonomic, it’s a smart design. There is no chance for the optic to be switched off or the reticle to be adjusted on accident. Turning the optic off requires a 5-second press on the off button, so it’s impossible for it to be tripped. 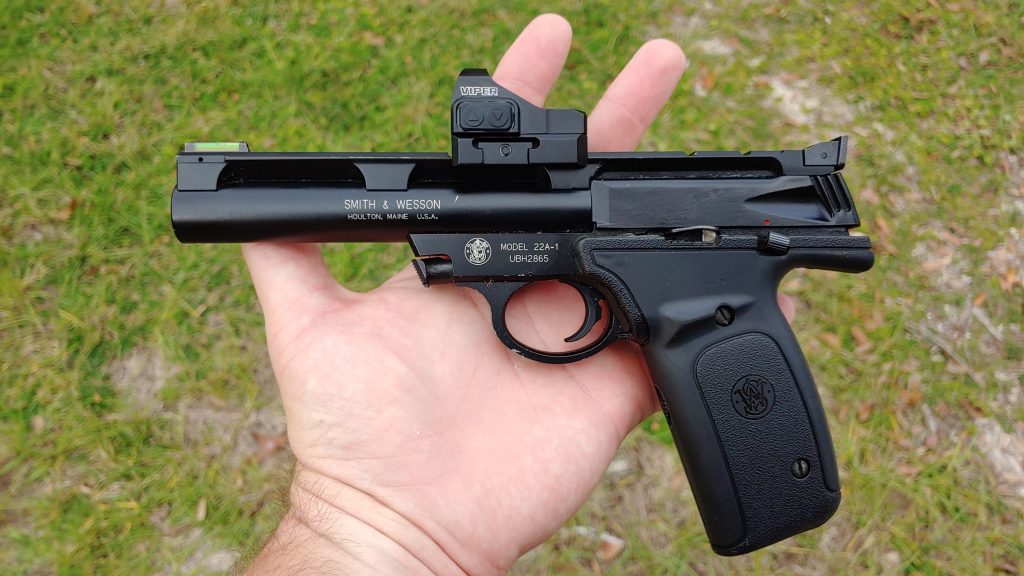 The itty bitty Viper has ten brightness settings, and while none offer NVG compatibility, the optic can get superbly bright. Bright enough to conquer the sun of a Florida day without much of a fight. At higher settings, the reticle has some minor starbursting effect to it, but at seven and below, the dot is quite crisp and quite clear.

The Vortex Viper implements a very smart lockout system for the adjustment turrets. A small flat head unlocks each turret, and this allows you to make your adjustments. Once your dot is zeroed, you can relock the turrets and have confidence that they won’t move on accident. It’s simple and easy to use. 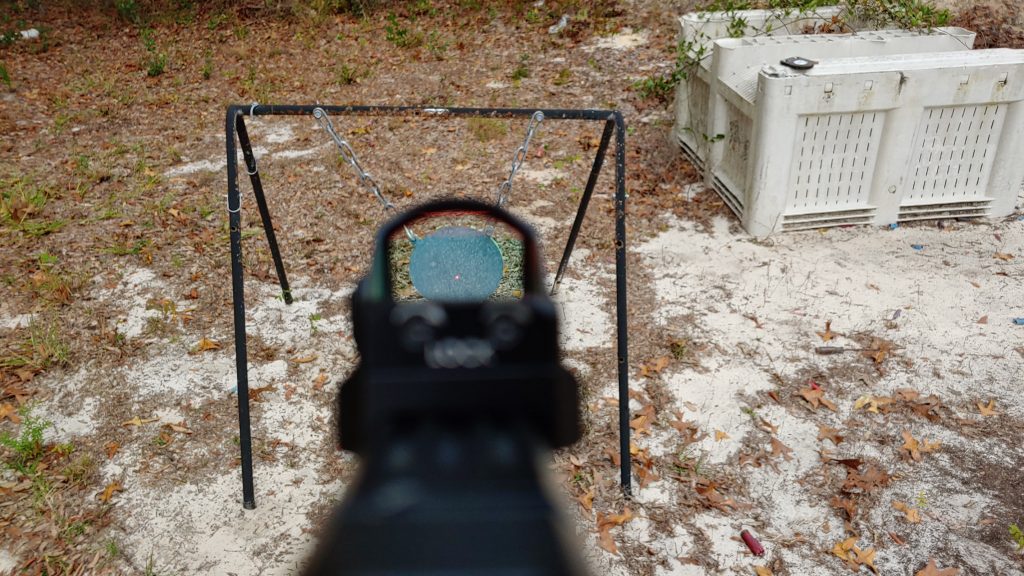 The included tools are all you need to make adjustments to the Viper and to unlock the turrets. The 1 MOA adjustments make zeroing quick and precise enough for handgun ranges. It’s hard to do a box test with a handgun, but as far as I can tell, the adjustments are true. I used a target with 1-inch boxes at 50 yards, and every two clicks resulted in the reticle moving a full inch on the target.

I’ve attached this little fella to my Smith and Wesson 22A pistol. The 22A is a simple 22LR pistol, and it’s made for plinking and hunting. The top of the gun has a full-length Picatinny rail, and there sits the Viper. As it turns out, adding a red dot to a pistol like this is a great idea.

The current ammo slump has made 9mm impossible to get, but locally 22 LR is still easy to find. This makes most of my shooting 22LR focused right now. I not only forgot how fun it is to just plink, but I forgot the added capability red dots add to handgun shooting. I stepped back to 20 and 25 yards and listened to the steel go ding, ding, ding. 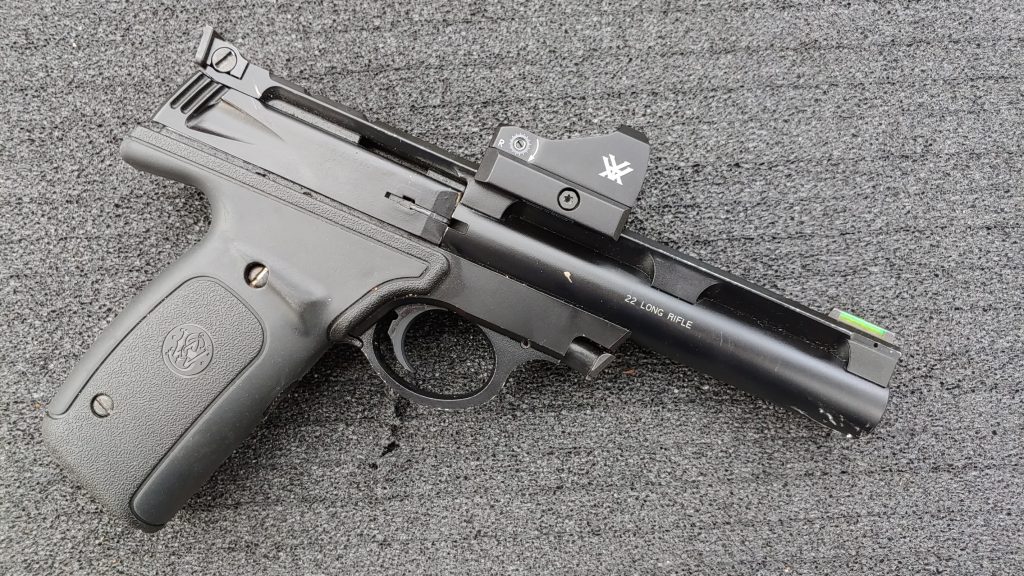 The 6 MOA red dot was perfectly suitable as far back as 50 yards. Admittedly I need a more stable position to get consistent dings on steel, but I could. The red dot makes it easy to focus on the target. Lay the dot over the target and focus on the target. Target focus is the key to success with a red dot, and it makes shooting more intuitive. The sensitive nature of the dot shows you all your flaws and forces you to be a better shooter or go back to iron sights. It allows me to perform well above what iron sights can do. 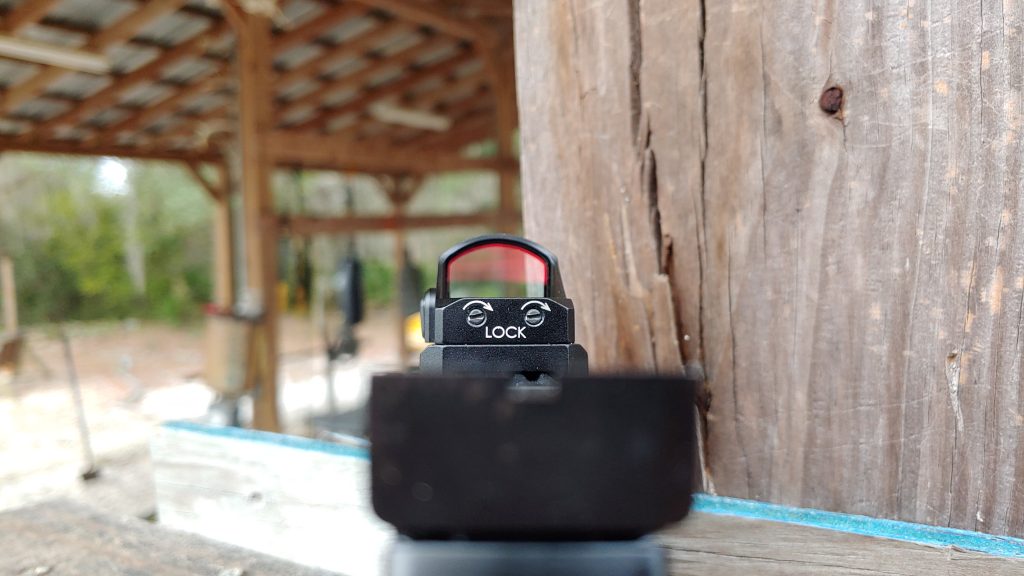 Without a doubt, the addition of the Vortex Viper increased my ability to hit my target. It did so with greater speed, greater precision, and at longer ranges. The Little Viper is perfectly suited for handguns, and the design and construction exhibit that. As a permanent addition to my gun, the plan is to take some rabbits in the winter, and I think the Viper is the perfect predator to do so.

Confessions of an Outdoor Slacker Mom