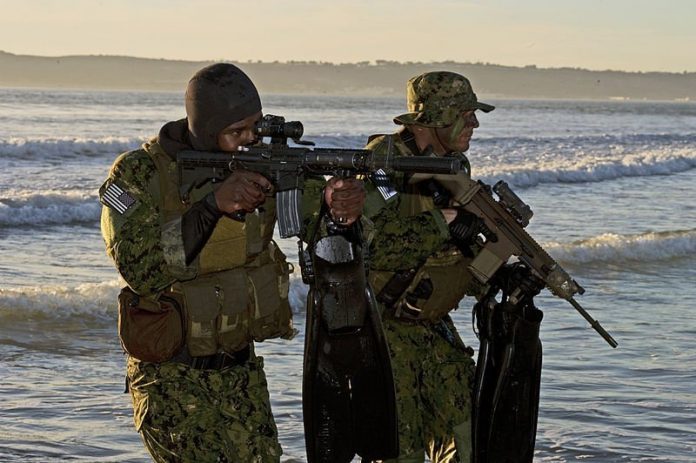 In an apparent move to attract more candidates, the Navy has released a new recruiting video about the Navy SEAL selection and training process.

Many people don’t realize that shiny military career fields in special operations—such as SEALs, Green Berets, Rangers, Pararescuemen, and Marine Recon—serve as a great way to recruit quality people for the big Navy, Army, Air Force, or Marine Corps. The high attrition rates of selection and training programs for any special operations unit mean that most people who enter the military with the dream of becoming a hard-charging pipe-hitter end up failing and serving out their enlistment in a comparatively unremarkable military occupational specialty (MOS). Recruiters and their commands, of course, understand that SOF is a recruiting gem—as should any aspiring commando—and thus place added emphasis on them. Enter a Navy recruiting office, and chances are you’ll be greeted by a huge poster of a tough SEAL challenging you with his gaze rather than a poster of a mass communications specialist.

This video was released at a moment when the reputation of the Naval Special Warfare Command (NSWC) isn’t at its best. With the legal affairs of Chief Gallagher and numerous other incidents—such as the murder of Green Beret Sergeant Logan Melgar, in which two SEAL Team 6 operators were involved—fresh in mind, the Navy seems to wish to divert attention to the positive aspects of the SEAL community.

The video goes over the equipment that SEALs might use downrange (it mentions only the very basic stuff, such as M4 rifles, Sig Sauer and Glock pistols, etc., without exploring the more high-speed options available to a SEAL operator once he’s in a SEAL platoon).

The video also covers some of the different environmental training that SEALs undergo. It specifically mentions the arctic warfare portion of SEAL training that takes place in Kodiak, Alaska. SEAL candidates are plunged into freezing-cold water for carefully calculated lengths of time (wind, water, air temperature, and the physical state of the candidates determine the duration of the forced ice bath).

A great point that the video makes is that foreknowledge about the selection process isn’t going to help an aspiring SEAL succeed. The fame of the SEAL teams, which has swelled to absurd levels since Operation Neptune Spear (the mission to kill Osama bin Laden), means their selection and training process has been studied and scrutinized relentlessly. Even before the Global War on Terror began there were documentaries about Basic Underwater Demolition/SEAL (BUD/S) training. As a result, candidates enter the pipeline better prepared than any of their predecessors. But it matters not if one knows when Hell Week is coming or how many log PT sessions per week he will be doing. It’s the mental stamina and grit that will make or break a candidate. It has always been and will always be.

Feature image courtesy of WikiMedia Commons via the U.S. Navy