The Russian military hardware is constantly improved and upgraded. Their newest APC (Armored Personnel Carrier) codenamed the Bumerang, which was unveiled during last year’s May 9 Victory Parade in Moscow – is currently undergoing preliminary trials before it will be ready for mass production.

The same thing is undergoing with Norinco VP10, a Chinese version of Russian APC “Bumerang” which also entering testing phase. The new APC is dubbed as “Unkillable” according to the Alexander Krasovitsky, the head of the Military-Industrial Company, which is tasked with Bumerang construction. He heaped praise on what he describes as a “machine you simply can’t kill.”

“This is a new generation vehicle, better armed and better protected, both actively and passively, and boasting an advanced system of control, which exceeds what you can find on the very best foreign analogues,” Krasovitsky told RIA Novosti.

First public showcase occurred during the V-Day (Victory Day parade on Red Square) in 2015. The Bumerang is already being eyed by foreign militaries.

“There is a great deal of foreign interest in buying the Bumerang. If we get an official go-ahead from the government we’ll be ready to sell,” Alexander Krasovitsky said.

The Bumerang is constructed to replace the BTR-82/A, a heavily modernized version of the 1980s-designed BTR-80 which was used in SSSR and in post-Soviet Russia as the main APC in Russian military.

Capabilities and technical specifications of Bumerang

Its 8×8 wheeled armored vehicle equipped with a front-engine design which features ceramic armor technology. The APC is equipped with anti-tank grenade and anti-mine protection, has a crew of three, and can be fitted with a 30 mm anti-materiel or armor-piercing cannon, a 7.62 mm or 12.7 mm machine gun as the primary or secondary weapon. 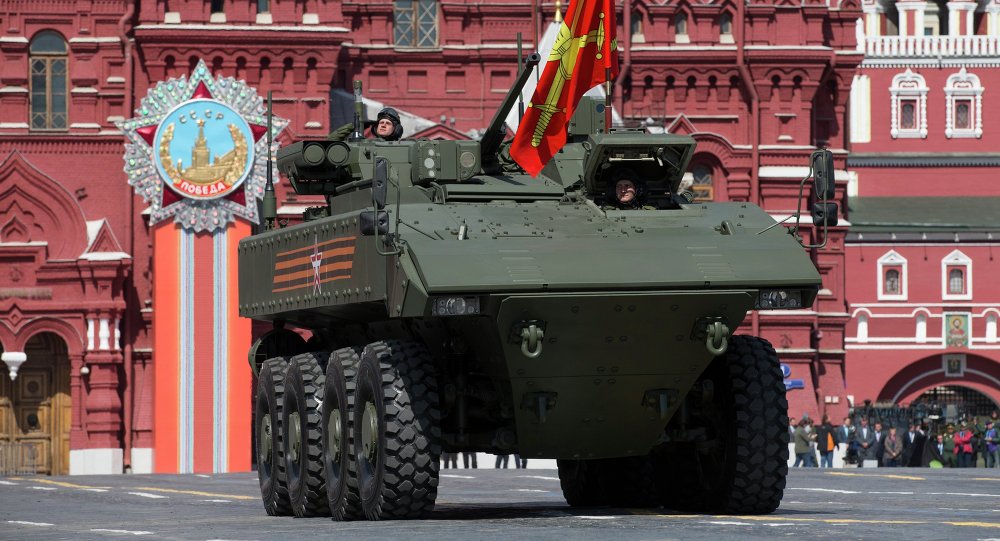 In addition, to its role as an armored personnel carrier, the Bumerang can also serve as a full-scale anti-tank missile carrier, an air defense missile launcher, an armored ambulance, a command post vehicle, a fire-support vehicle and a mortar carrier. Literally, for all military task in modern warfare.