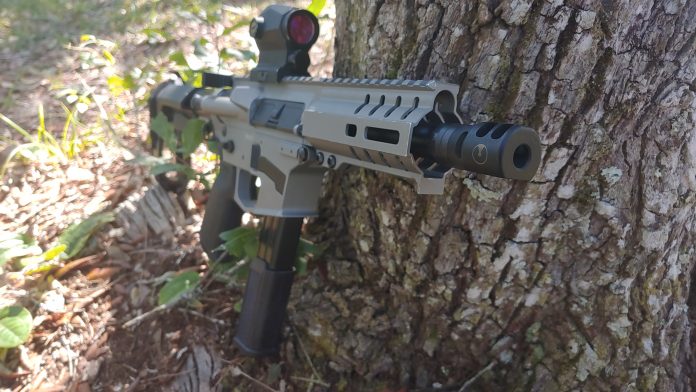 It’s not an Evanescence song, I promise. The Lithium from Ultradyne is a compensator and muzzle brake combination device designed specifically for 9mm PCCs. Ultradyne is a company that is well known for its advanced iron sights and has recently jumped feetfirst into the muzzle device market. The Lithium is no teeny tiny muzzle device. It’s big, mean, and not afraid to be bold. Ernest Hemingway would definitely own one.

The Lithium combines a total of six ports to redirect gas to your benefit. Your standard 9mm PCC isn’t a weapon that beats and batters, but a relatively soft shooting, soft recoiling weapon. That doesn’t mean it can’t be better. If your aim is to keep your sights steady and unmoving, it’s worth taking the help. 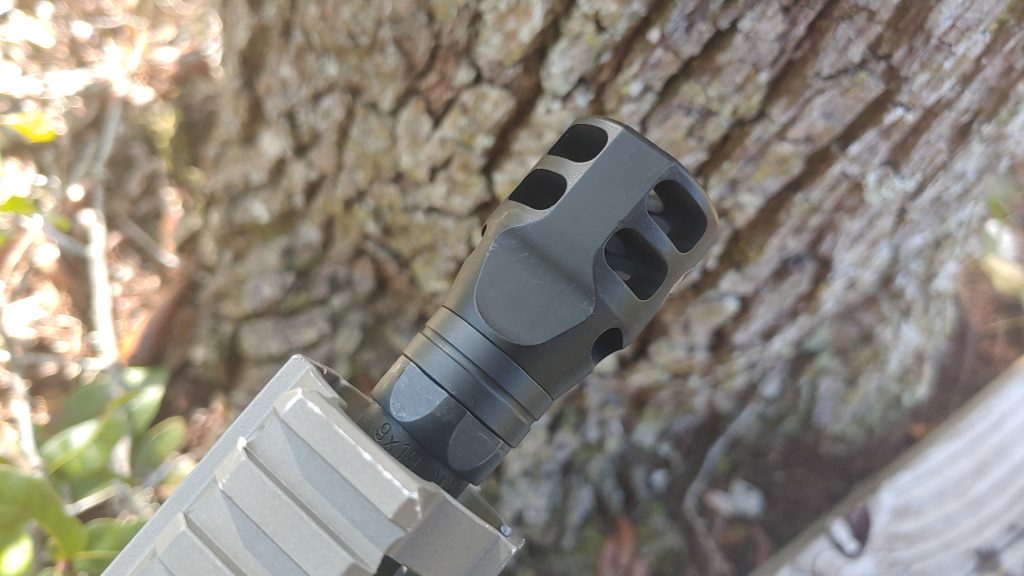 With the Lithium, we have two side ports that create a braking effect that reduces felt recoil. On the top, we have four ports to redirect gas downwards to eradicate muzzle rise. That’s the idea anyway? Does it work? Well, we can find out.

One thing Ultradyne has down is its installation methods. It’s not just twist, add crush washer, twist, rinse and repeat until the thing looks right. Ultradyne utilizes a shrouded timing nut. You attach the timing nut to the gun, then a washer in between, followed by the Lithium muzzle device. 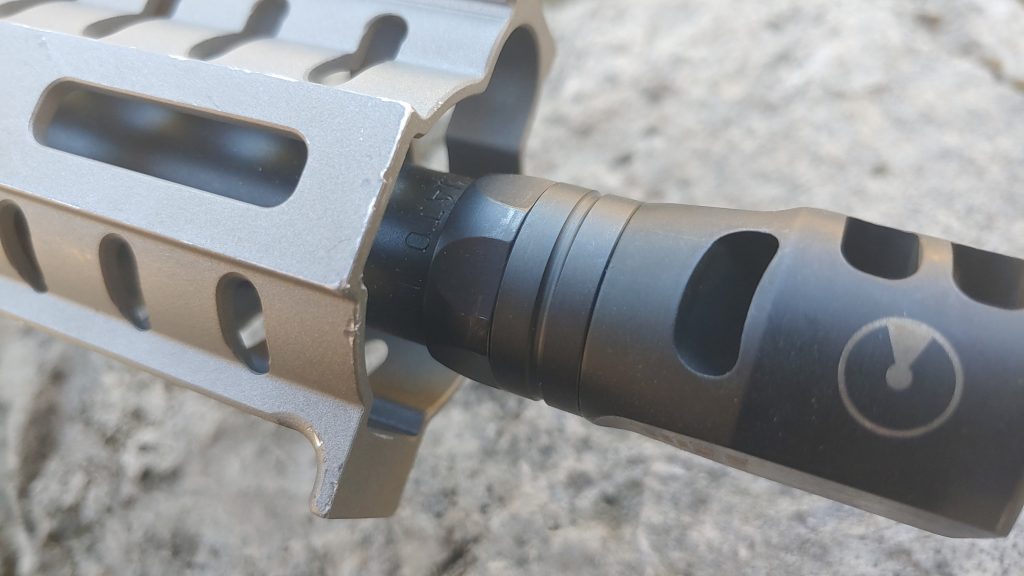 The timing nut allows you to position the device perfectly and get it tuned properly and evenly. This can be done very quickly and efficiently, making it easy to attach and quick to install. I really like this system, and I need to grab a handful of these timing nuts separately for any other muzzle devices I plan to use in the future.

Breakdown of the Lithium

If you want something small and sleek, look elsewhere. The Lithium is 1.75 inches long and 1.125 inches in diameter. It weighs 3.2 ounces by itself. It’s big, but it’s effective. Devices like this are aimed at maximizing performance. It’s not uncommon to see these devices used in high-level PCC competitions.

The Lithium is made from 416R stainless steel, and it uses a salt bath nitride finish to offer the utmost protection. That is pretty important when the device contains small explosions with every shot. The Lithium is rugged and well-made, perfectly suited for harsh and hard-core use.

To the Range, We Go

I attached the Lithium to my Banshee Mk17 and loaded up a few of SIG’s new 30-round mags, and hit the floor running with a wide variety of ammo types. This includes some standard 115-grain FMJs, some 124-grain NATO rounds, and some +P 147-grain JHPs. A variety of ammo allows me to see how well the device works across a spectrum of power and ammo types. 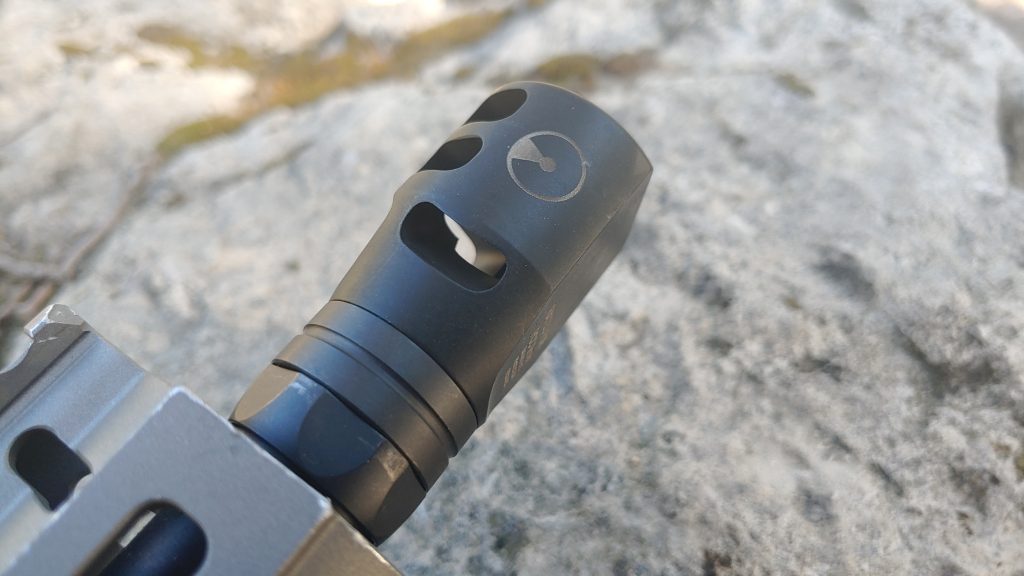 When combined with the already soft recoil of the Mk17 and its radial delayed design, I got a weapon that’s crazy controllable. Even with the heavier +P rounds and the NATO standard 9mm, the gun remained soft shooting and easy to control. The Lithium caused zero issues in the reliability department, which is a concern with blowback-operated firearms, even with a radial delay.

Another big advantage I noticed was that the vents vent gas out the sides and out of the line of sight of the shooter. There might be some additional muzzle flash, but it’s not noticeable while aiming down the sights. The Lithium promotes great control, less recoil, and considerably less muzzle rise. 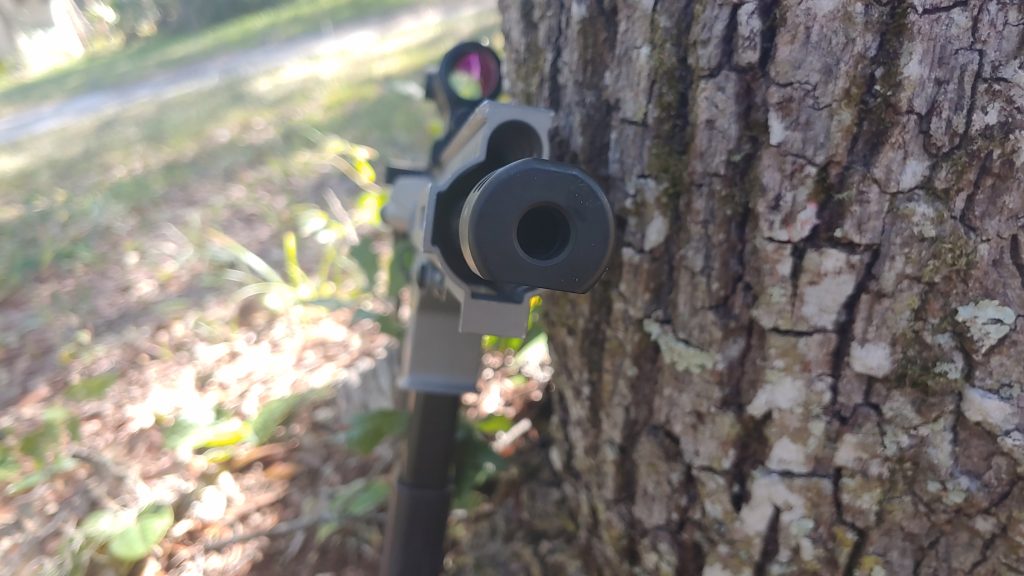 It’s almost humorous how much extra control the Lithium adds to your PCC platform. It takes some serious sting out of the gun and makes it a real kitten. It’s almost like a very loud and mean .22 Magnum. There is a little thump, but not much, and your sights barely move. Isn’t the goal to keep the sights from moving? If so, then the Lithium is a worthwhile addition to your pistol caliber carbine.