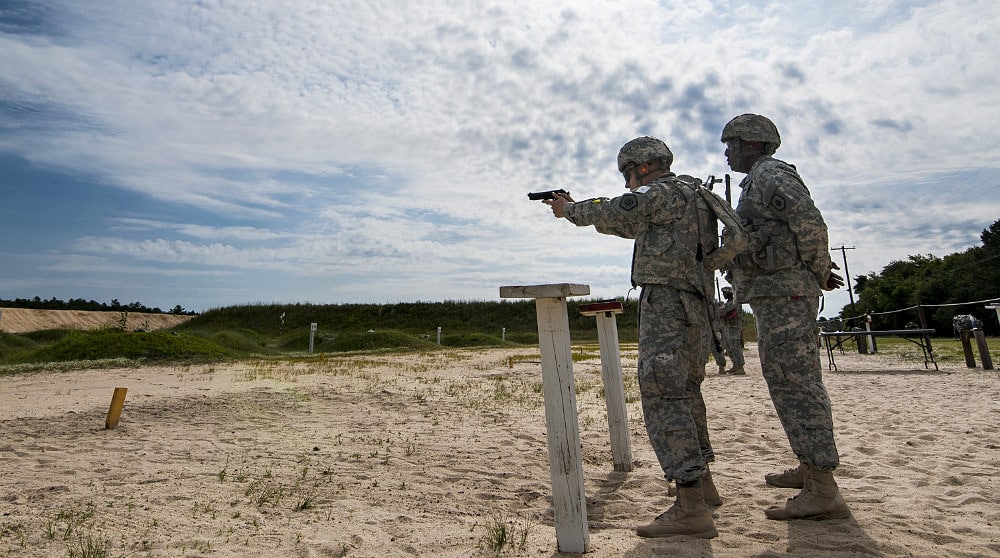 The Army’s XM-17 Modular Handgun competition took a step forward today at the Picatinny Arsenal in New Jersey after a fourth industry day for vendors to showcase their products for further evaluation as a replacement for the Beretta M9 and M9A1. “More than 20 companies attended the event,” said PEO Soldier’s Debi Dawson.

For now the identities of the vendors is being kept under wraps according to federal procurement restrictions but they are all commercial, “off-the-shelf” guns and accessories. The vendors include firearm, accessory and ammunition manufacturers as the military is looking for a complete package, with holsters and newer types of ammo including hollow points. The Army passed on the updated Beretta M9A3 introduced late last year in order to evaluate a larger pool of potential replacements.

Not only is the type of ammo being considered but also the cartridge. The military wants something that’s all-around more effective than their current M9s loaded with ball ammo, and that means they are also open to other cartridges, including .357 SIG, .40 S&W and .45 ACP.

That doesn’t mean 9mm Luger is out of the running. The XM-17 program is interested in handguns that can withstand regular use of loads up to 20 percent higher in pressure than standard-pressure rounds without wear or degradation — they want their next handgun to handle the hottest stuff.

“Expanding the XM-17 Modular Handgun competition to include special purpose ammunition will provide the Warfighter with a more accurate and lethal handgun,” said Richard Jackson, Special Assistant to the U.S. Army Judge Advocate General for Law of War.

“Other types of ammunition allow the XM-17 Modular Handgun System to be optimized by vendors, providing a more capable system to Warfighters across the spectrum of shooter experience and skill level,” he said.

The XM-17 program is evaluating every aspect of sidearms and is looking for something that sports the best in modern features and construction that will meet their reliability and durability needs. Other features that are being focused on include ambidextrous or reversible controls, striker-fired actions, lighter materials and high capacities. The Army plans to buy 7,000 compact variants for special roles.

It’s called the Modular Handgun because the military primarily requires features to tailor the winning pistol to individual shooters and mission needs. It call for a Picatinny accessory rail for laser sights and other handgun accessories, which is fairly standard, but also a modular grip that can be altered to fit the many different sizes of soldier.

“Handgun technology has advanced significantly thanks to lighter-weight materials, ergonomics and accessory rails since 1986 when the M9 entered the Army’s inventory,” Dawson said.

The Army alone plans to buy as many as 280,000 handguns after selecting a successor to the M9 and other branches of the military may order up to 212,000 more. The XM-17 program is a joint effort that is also being led by the Air Force.

This will be the biggest change in Army small arms in a long time and the contract will bring a lot of prestige to the winning vendor or vendors. The M9 and variants have been in service for almost 30 years and though a few other handguns have entered into military service not one can claim to have replaced them.

That’s something only the winner of the XM-17 will be able to say.