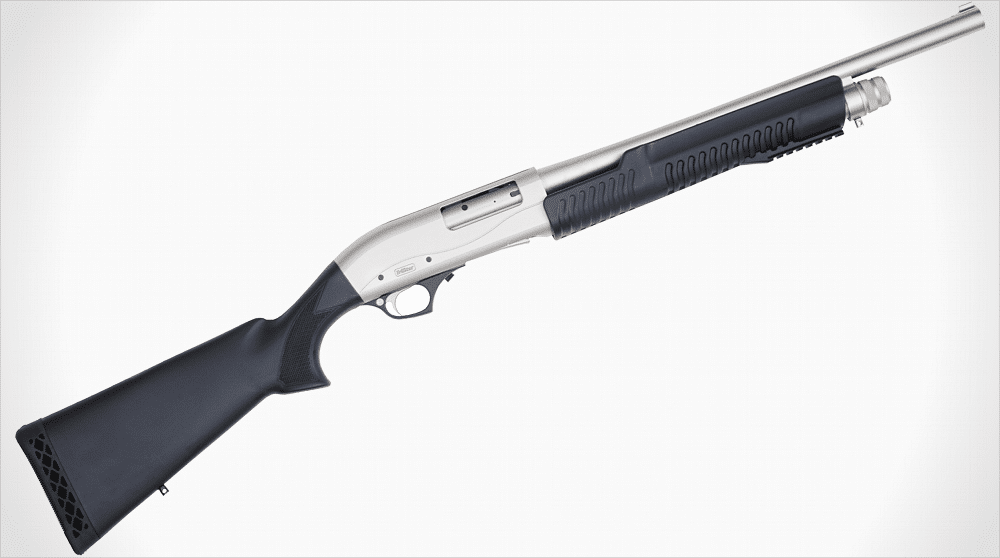 TriStar Arms has been a go-to name in affordable firearms from the day the company opened its doors and happy to announce its new Marine Tactical Cobra pump shotgun that is priced to move.

“Our line of Cobra shotguns are both affordable and dependable, whether you’re in the field hunting, at the range or protecting your home,” said Gus Bader, president of TriStar Arms. “With the increasing popularity and customer demand, we are extending this line to provide more features for both existing shooters and new shooters alike.”

The Marine Cobra shotguns are all built on lightweight alloy receivers and have short 18.5-inch barrels. They weigh in at just 6.2 pounds. The barrels have a raised blade front sight and are chambered for 2.75- and 3-inch shells. They have a capacity of 5+1 and come with a shot plug and choke tube.

The barrels are threaded for Beretta-pattern chokes and are chrome-lined for corrosion resistance and extended barrel life. The shotgun features a brushed satin nickel finish on all the non-synthetic parts completing the classic style of marine shotguns.

What puts the tactical in the Marine Tactical is an extended, railed forend. The forend is designed to be used with a weapon light, but leaves that option to the individual user. These shotguns are also meant to be slung and come with a set of sling swivels installed.

One interesting feature of TriStar Arms Tactical shotguns is that the action is sprung. The forend is held forward under spring tension and will lock into battery on its own. This helps prevent one of the most common user-induced malfunctions, short-shucking.

While pump-action shotguns are very reliable, because they are manually-operated, if the user makes a mistake when handling them they can cause a malfunction, particularly when under stress. The Cobra Tactical shotguns’ sprung action makes this particular problem a lot less likely. Users only need to pull back on the forend to start cycling the action — simply letting go of the forend will load and chamber the next round.

This also makes for a faster shooting platform for rapid fire.

Even more appealing than the solid finish, low weight and clever operating system is the price. TriStar has set the MSRP of its new Marine Tactical Cobra at only $369. Stores are listing it at right about $300, give or take.

TriStar offers a matte finished Tactical Cobra at $319 for people on an even tighter budget. Like the Marine Tactical, the standard Cobra also has a spring-loaded forend.

If you’ve been hunting for a boat gun, truck gun or just a good pump that won’t break the bank, check out the Marine Tactical Cobra if you get the chance. TriStar’s built a solid reputation for guns that really deliver on quality at unbeatable prices.

For more information about these shotguns and other TriStar firearms visit the company’s website.