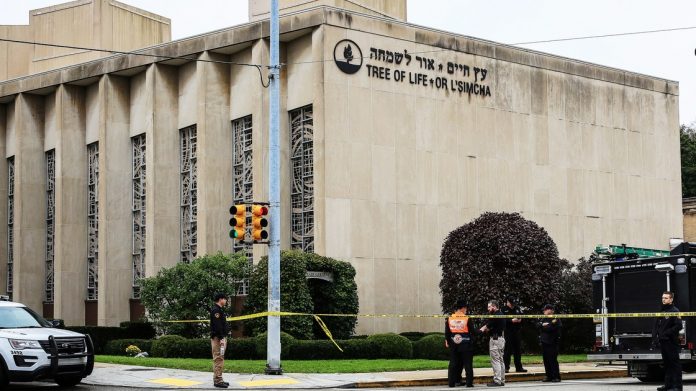 On Saturday morning an anti-semitic piece of human trash shot up the Tree of Life synagogue in Pittsburg.

He hates President Trump, who he says is a Jewish collaborator or some other such tin foil hat nonsense.

He probably hates President Obama too.

And Hispanics, definitely hates them.

The man claims the Jews are responsible for the hispanic caravan that is coming to “invade” the U.S. As if another 7,000 illegals would tip the low/high 10-30 million here already into some kind of free fall.

Ultimately this is about remembering what Bower’s is… A piece of shit.

Robert Bowers, the monster who took the lives of 11, several old enough to remember The Holocaust in their lifetime, is nothing special. He is a violent outlier and the rare people like him will always be a threat.

Violent outliers may have a different name for their motivations but the result is the same. Bowers is not different from Kelley. Not different from Roof. No different than Farook and Malik. All chose for their personal reasons and beliefs to commit terrible violence and void themselves of their humanity.

It really is that simple. Violence is the commonality. There will always be a terrible few who will willingly shed their humanity for a motivation.

On the day that occurs there is only one option left. Be the one who is better at violence. Be one who saves lives. By the gun, by the sword, by the fist, by trauma and aid to the injured.

Do not give these outliers the fight. The day is not for them even though they tried to take it.

Bower’s is just a lesson to remember and then a name to forget.