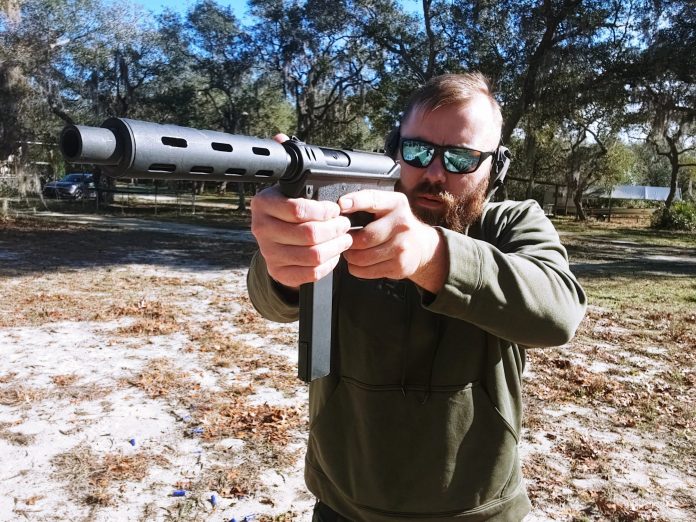 In the deep, dark hallways of gun history, there are several guns worthy of their own highlighting article. Unfortunately for you, I didn’t choose any of these decent guns to write about. Instead, I went with the TEC 9.

The history of the TEC 9 is quite convoluted. The TEC 9 has lived and died by many names. These names include the original Interdynamics MP-9, which was a submachine gun designed for military forces. The simple blowback SMG found no military buyers and was soon marketed to the American populace as a rather sizeable 9mm pistol. George Kellgren, the man behind Kel-Tec, originally designed the gun and teamed up with Carlos Garcia of Miami, Florida, to form Interdynamic USA and market the weapon to the American civilian market.

The first model was called the KG-9 and was an open bolt pistol. KG stood for Kellgren and Garcia. The open bolt design was effortless to modify to a full-auto configuration, and this drew the ire of the Federal Government.

If you’ve ever heard the gun store gossip or the bubba lore that all you have to do is “file down the disconnector” to make a gun full auto. It came from the KG-9, because it was true. A little file work, and you could quickly turn a KG-9 into a full auto weapon. The ATF wasn’t pleased about this and demanded Intratec to convert the weapon to a closed bolt configuration. This became the KG-99.

The KG-99 was even advertised with a forward “assault” grip for a period of time before the ATF eventually came in and said ‘stop that’ once more. A KG-99 equipped with a forward grip would be an AOW and subject to the same NFA provisions as a machine gun.

What’s in a Name

George Kellgren eventually left the company, and Interdynamics USA became Intratec, and the KG-99 became the TEC 9.  Along the way, the company became Navegar but still did business as Intratec. Outside of the TEC 9, Intratec produced a TEC-22, a derringer, and a series of cheap automatic handguns in more traditional variations.

The TEC-9 had already become famous in and out of the gun world. Your traditional hobby or professional shoot dismissed the weapon quickly. They were cheaply made, not very reliable, and ammunition picky. Plus, they were huge and rather useless as far as guns go. They offered no practical advantage over something like a Glock 17 with an extended magazine.

In pop culture, the gun was quite famous. It appeared in tons of television shows. It has an intimidating appearance, made it stand out as a bad guy gun. Miami Vice, in particular, loved to arm the villains with legally converted KG-9 machine guns. Numerous TEC 9 models showed up the famed Walker Texas Ranger television series too. The TEC 9 also showed up in two of my favorite movies, Big Trouble in Little China and Falling Down.

TEC 9’s popped up in dozens of rap songs over the years, and a rapper even took the mantle Tech N9ne. The gun’s appearance in rap songs, and being wielded by bad guys in movies and television shows gave the gun a shining criminal appeal.

Something similar has happened with Draco’s too.

The TEC 9 had long been a target for gun control efforts. Not for any real reason beyond the gun looked scary. The SMG style design, with the aggressive barrel shroud, and the long forward of the trigger magazines made it quite distinctive. Washington D.C. passed a law stating firearms manufacturer’s can be held liable for the use of their weapons, and specifically named the TEC 9.

Intratec merely laughed off the idea that you can be sued for how their guns are used by name and just renamed it. They also moved the sling keeper to the rear of the gun. That’s all they changed and the TEC 9 became the TEC-DC9. There is some speculation over what DC stands for. Some claim it stands for Designed for California. Others claim it’s the DC from Washington DC and was poking the federal bear. Mr. Garcia claimed DC stood for defensive carry when he testified in front of a Connecticut court when he challenged their assault weapon’s ban.

The firearm remained controversial due to its appearance in several high profile crimes.

The primary reason the gun was popular with criminals is simple. It was cheap. Roughly 250 bucks a pop. Second, it had an intimidating appearance. Criminals are just as vain as the rest of us, and a criminal looking gun wouldn’t certainly appeal to them. The thing is, I’d much rather a criminal be armed with a TEC-9 than a Glock, or any other traditional firearm. At least I know the gun is unreliable, unwieldy, and the sights blow.

One major controversial element of the TEC 9 was its advertising. Supposedly one advertisement claimed that TEC-KOTE that covered the weapon was ‘resistant to fingerprints.’ I can find lots of TEC 9 advertisements but I can’t find any that make this claim.

Others include the TEC 9 advertised as,” As tough as your toughest customer,” Again this is another advertisement I can’t seem to find. I can find others showing a variety of TEC 9s with different finishes and options as well as some other Intratec pistols. I can’t seem to find any of the controversial advertisements. It would seem these would be preserved, but alas they are not.

I can find advertisements from esoteric guns from the 1950s, but nothing on these 1980s and 1990s advertisements. Even anti-gun websites that look like they were created in the 90s seem to have documented these advertisements. I’m wary that they ever existed, and if any of our readers know where to find them please let me know.

Oddly enough, in the 2003 film Runaway Jury, the fingerprint resistance of a firearm is mentioned in the film during a court case against a firearm manufacturer.

The Clinton AWB Kills the TEC 9 (Not really.)

If you ever read the Clinton Assault Weapon’s Ban you’ll see a section on pistols. It was written in such a way that it appeared as if the TEC 9 was the basis for most of the language banning “assault pistols.”

The TEC 9 simply became the AB-10. AB stands for After Ban and complied with the AWB. Like many times before the TEC 9 continued to thrive. It seemed like Carlos Garcia was an astute businessman who wasn’t afraid to take advantage of the controversy to further market his pistol. His marketing director told a New York Times reporter, “I’m kind of flattered. It just has that advertising tingle to it. Hey, it’s talked about, it’s read about, the media write about it. That generates more sales for me. It might sound cold and cruel, but I’m sales oriented.”

They also took advantage of the politician’s dismay for their weapon. They created a sense of urgency in their marketing by constantly detailing the weapon’s numerous bans across the United States. In a story as old as gun laws the more the gun was banned the more they were capable of selling. Reportedly up to a quarter-million of the various TEC 9s were produced and sold.

The TEC 9 – Behind the music

I actually just found a TEC 9 for sale at my local gun store. Technically it’s a TEC-DC9 mini. The mini variant has a very short barrel and comes with a barrel shroud that attaches or detaches with ease. It was on consignment and rather cheap so I jumped on it just for fun.

I took it out to the range and fired a few rounds. Not a few hundred, or a few dozen, just a few because it’s horribly unreliable. It jams, fails to extract, and only eats 124-grain FMJs. The gun is just as bad as I had always heard. The sights suck, the ergonomics suck, the guns massive bolt and blowback design creates a lot of recoil. It’s a crummy gun overall.

Luckily, I bought it as a collectible item since Intratec and Navegar shut their doors in 2001. It may never be worth a dime, but it’s an interesting gun with a fascinating history.

I didn’t realize how convoluted and controversial the gun was in its time. Even now I’m not sure what’s fact and what’s speculation. I did my best to derive the truth, but when it comes to the TEC 9 the truth might be a bit relative.