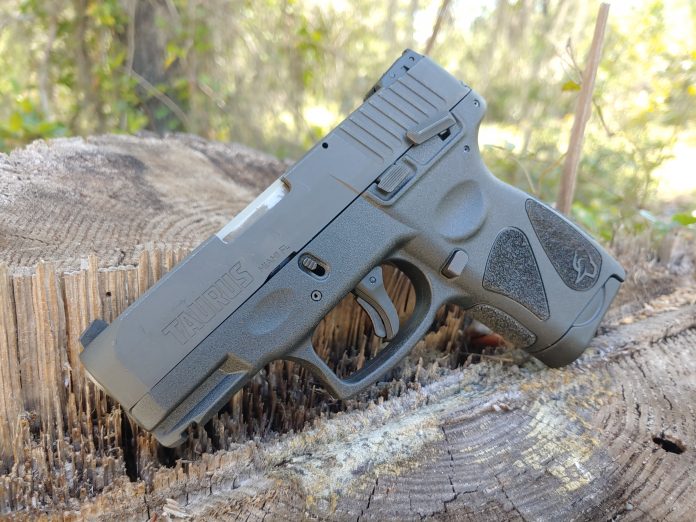 As the title says the Taurus G2S is far from fancy. The gun snob in me wants to write it off, but the realist in me knows that is a fool’s errand. The Taurus pistols command a big part of the pistol market. They produce pistols that people can afford. I’ve had an overwhelmingly negative experience with more than a few Taurus guns. However, those were all revolvers, and each failed quite poorly. My first handgun ever was a Taurus PT111 New Millenium Edition and believe it or not I never had a poor experience with it.

I purchased the G2S simply to see where Taurus stood in their handgun production in 2019. Plus, at 180 bucks the G2S was priced just a bit above a flippin Hi Point. The difference being that the Taurus uses a more traditional Browning rotating barrel system that doesn’t require a massive slide to operate. The Taurus is a more traditional weapon, and much more refined than Hi Points, Cobras, and most budget brands.

The Taurus G2S – Breaking it Down

The G2S is a single stack variant of the G2C pistol. It comes in both 9mm and 40 S&W, and in a few different finish options. My G2S is very basic, it’s a 9mm model that is all black. The gun comes with two 7 round magazines in the 9mm variant and in 40 S&W it comes with 6 round magazines.

The G2S comes with a manual thumb safety and adjustable sights. The thumb safety is positioned is the best way you could. It’s placed in a position that’s easy to reach and quick to disengage. The sights are a three-dot design and the rear sight is fully adjustable for both windage and elevation. The sights are cross-compatible with older models of Taurus pistols, including the PT 111 series and the older 709 and 740 single stacks designs.

The grip is nicely textured and pretty standard for a single stack design. Taurus really loves their roll mark and it’s emblazoned onto the slide is nice big letters. A more subtle and stylish bull’s head is textured into the grip. Overall the G2S isn’t a fancy gun, it’s very basic and that’s okay.

As I mentioned before the ergonomics of the manual safety are great. It’s textured heavily and easy to put in both safe and fire position. Safe is up, fire is down. It’s standard and very functional. I’m not a huge fan of manual safeties on handguns, but this one is quite unobtrusive.

The trigger also features a Glock safety blade, which seems to be a bit much when combined with the manual safety. The grip feels a bit like a board. It’s thin and is more corners than soft angles. I wouldn’t go as far as to say it’s uncomfortable, but better grip designs exist.

The magazine release is placed predictably and is very easy to find. It actually sticks out a fair bit more than most compact handguns. It’s quite easy to find and engage. This is one of the few guns whose slide will lock to the rear in my paws.

Most small guns, including the P365 and Glock 43, positioned the slide lock right where my thumb sits. This prevents the slide from locking to the rear when the last shot is fired. This doesn’t happen while shooting the Taurus G2S. This is a nice change.

One thing that isn’t so nice is the slide bite I get from the gun. Within the first 50 rounds, it’s broken the skin. Not super fun.

The trigger is an interesting one. technically it’s a DA/SA striker-fired design. It does lack a manual method to decock the weapon though. Taurus calls it a single action with restrike capability. That’s an accurate statement. If the round fails to ignite you can pull the trigger again and it will restrike.

This time the trigger will be a much longer double-action mode. Most single-action triggers are light and short. This isn’t the case with the G2S. The single-action pull is just as long as the double-action, it just happens to be a bit lighter.

The trigger is very gritty and it jumps a bit as it travels. Maybe it will smooth out in a few thousand rounds. The trigger isn’t bad enough to affect the accuracy, but if you’re spoiled on good triggers you won’t love it.

Another issue I had was a loose front sight. I was making groups the size of a shotgun pattern and couldn’t figure out where I was going wrong. That’s when I noticed the sight was jiggly. Luckily it was easy to tighten and I applied a little Loc Tite. After that, I no issues punching paper or ringing steel.

Overall this isn’t a bad gun by any means. It seemed to have a few hiccups in the beginning but has straightened itself out in further testing. It’s functional, but don’t expect anything innovative, special, or really notable about the gun. The 180 dollar price tag makes up for its few flaws. At this price, this might be the most bang for buck gun on the market. It’s not as fun to shoot as a Hi Point, but I can actually comfortably conceal it.