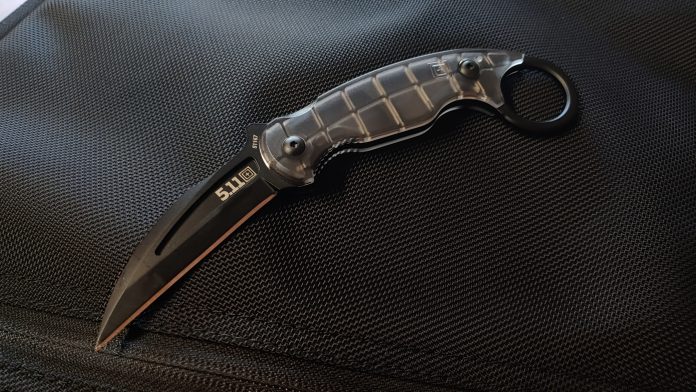 Knife designer Doug Marcaida teamed up with 5.11 Tactical to produce his latest knife series, the Talon. The Talon is a miniature karambit designed for self-defense, concealed carry, and other such fun. Marcaida’s Talon comes in both fixed and folding designs, and mine is the fixed carry model. Even as a fixed carry blade, the Talon is quite compact, and when paired with the rather awesome included sheath, it’s fairly easy to conceal and very comfortable to carry.

Before we dig into the Talon, let’s talk karambits. A lot of karambit designs are mall ninja bait with a fantasy look, and those should be rightfully ignored. No one has ever bought a good knife at a gas station. However, that doesn’t mean the karambit design shouldn’t be taken seriously. It’s been an Indonesian fighting and utility knife for literally hundreds of years. 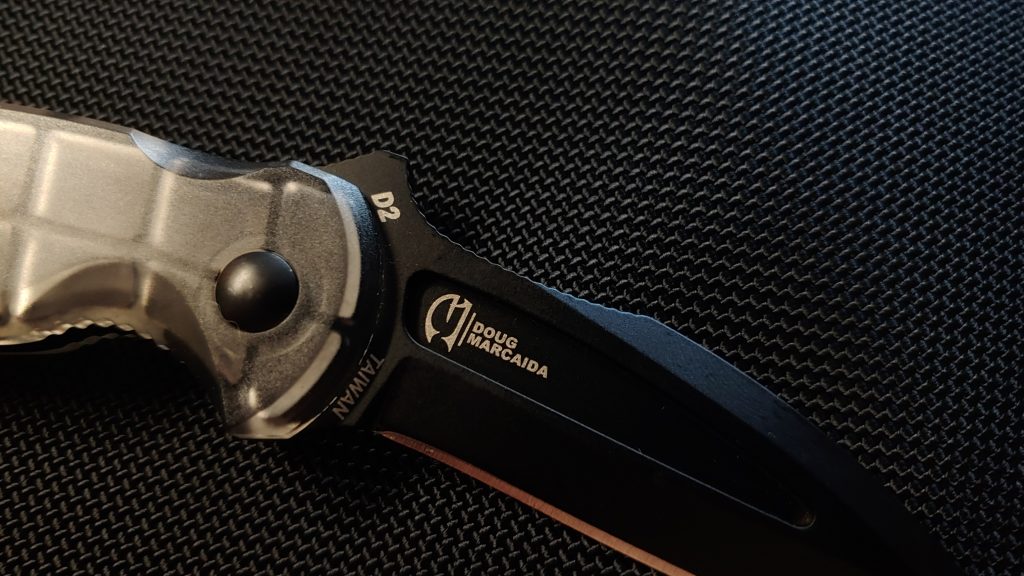 Karambits look like tiger claws and work very much like a claw with their heavily curved but short blades. The knives are thought to originally come from agricultural implements and eventually were adopted in knives. Fast forward a few hundred years, and a multitude of karambit designs now exist, and like most things with the passage of time, they’ve gotten better.

However, most quality karambits are not exactly carry-friendly. Emerson makes an awesome one…but holy crap, is it huge! It’s like packing a Ka-Bar. Other, more compact models utilize a folding mechanism. Sure, they work, but if I want a karambit, I want a fixed blade model. It strikes a good balance between keeping the tradition of the karambit while maintaining concealability. The Talon packs a 2.7-inch blade with an overall length of 7.1 inches. The Talon is .175 inches thick, and the handle is .45 inches thick. Talon wasn’t chosen as a name by accident. It’s modeled after the talon of an actual eagle. Since this is America, hell yeah.

The D2 steel blade is quite sharp and very rugged. D2 steel is a tool steel that’s designed to be functional and incredibly strong. It’s rugged, resistant to corrosion, and tough. Therefore it’s pretty dang good for fighting knives. The Talon holds an edge extremely well, but the tough nature of the steel makes it not so easy to sharpen. 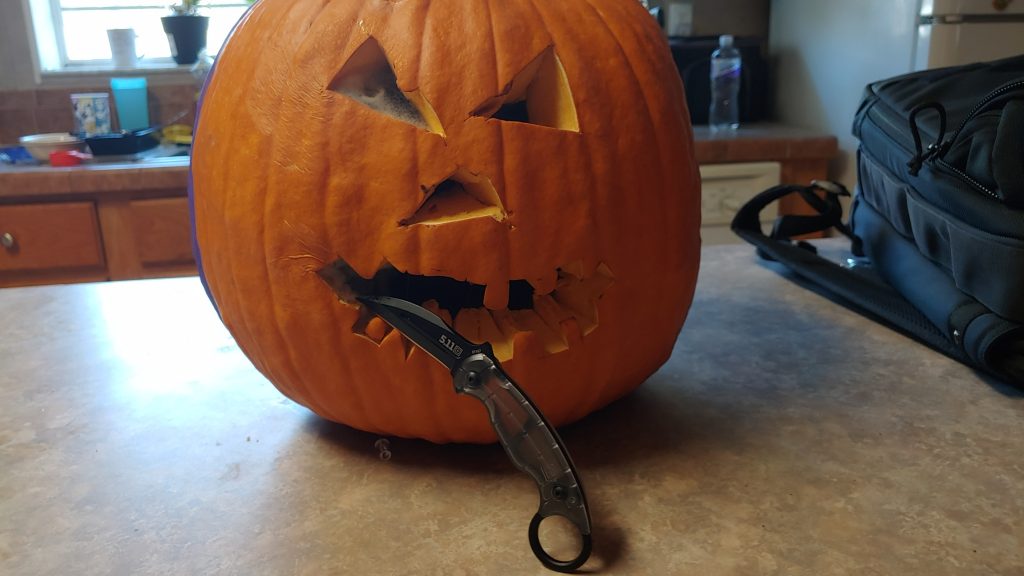 This made the Talon a very capable cutting weapon. It’s pumpkin carving season, so I figured, heck, why not! The Talon pierced the pumpkin with ease and slid right through the thin skin and hard flesh of the pumpkin. Admittedly, I quickly found out that a serrated blade works much better for pumpkin carving, and my hand got tired of forcing the blade through. 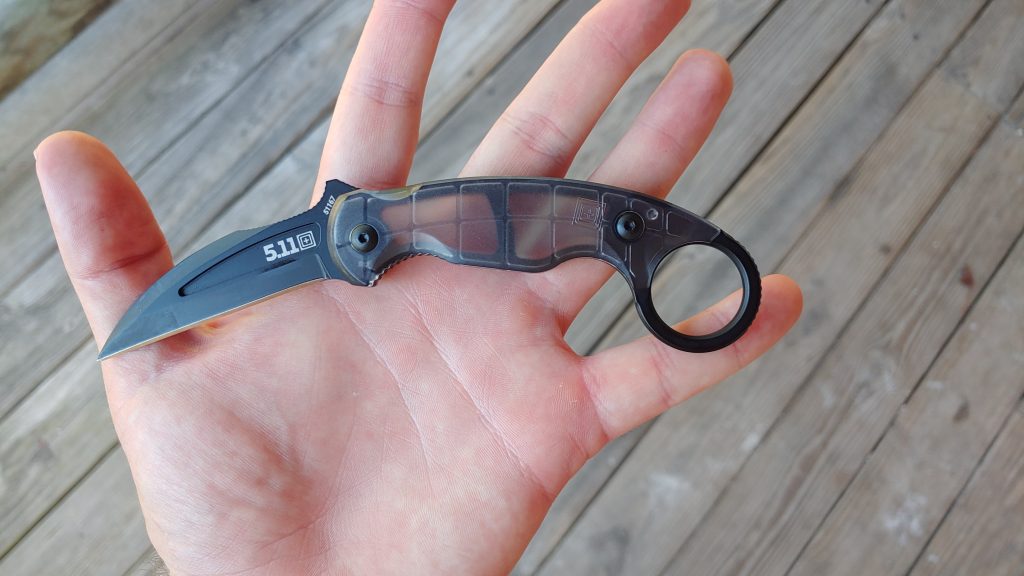 Pumpkin carving isn’t the strength of the Talon, but it does cut very well and slices very deep. The Talon did a much better job against raw chicken being sliced up for dinner. The blade ate through the flesh of that poor chicken breast with relative ease. I dragged the blade right through those chicken breasts and turned them into chicken tenders.
My point is, the blade is extremely sharp and very capable. Capable enough to be used as a self-defense weapon.

The Talon For Self Defense

That small blade makes it perfect for basic self-defense slashes. The chance of using a knife for self-defense is very low, and I say that as a guy who lives in a small town where a man used his pocket knife to kill an attacker who ambushed him. However, when it does happen, it’s almost always a super close-range affair.

The short blade is easy to use up close and personal. The karambit design allows you to slice with ease and gives you a weapon that makes the most of slicing. Slicing fast and left to right deals significant damage and is difficult to block. The Talon grants you a tool that can fend off an attacker and create distance between you and him. 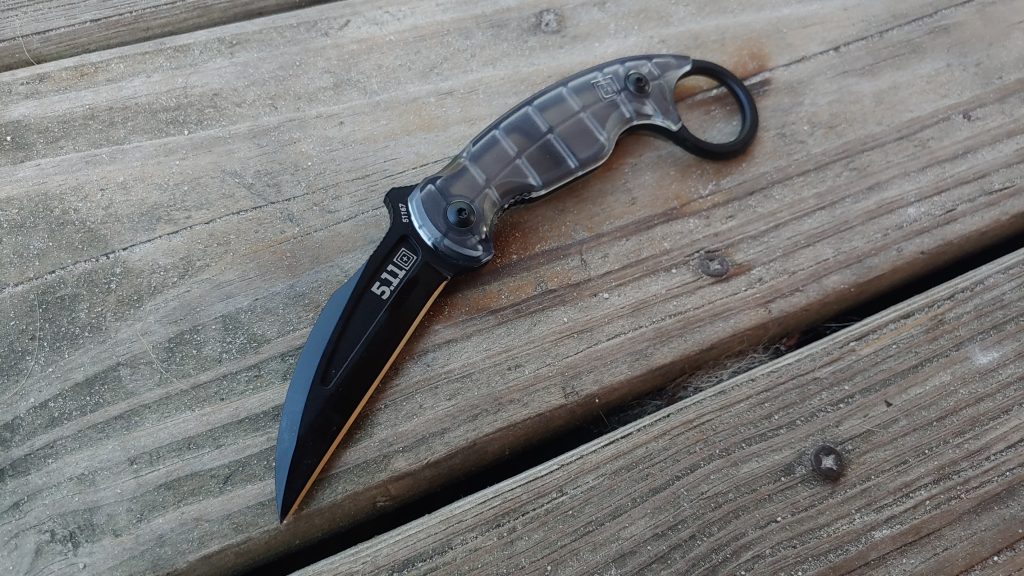 That distance can grant you options. Options include allowing you to escape, allowing bystanders to separate you from the attacker, making range to use a firearm, or simply buying time to prepare for your next attack.

Additionally, the big ring around your finger ensures you retain the weapon. It’s tough to drop and easy to retain with it wrapped around your finger. This design also makes it easy to draw without a great grip. Lastly, the ring can act as a quick use improvised impact tool too. 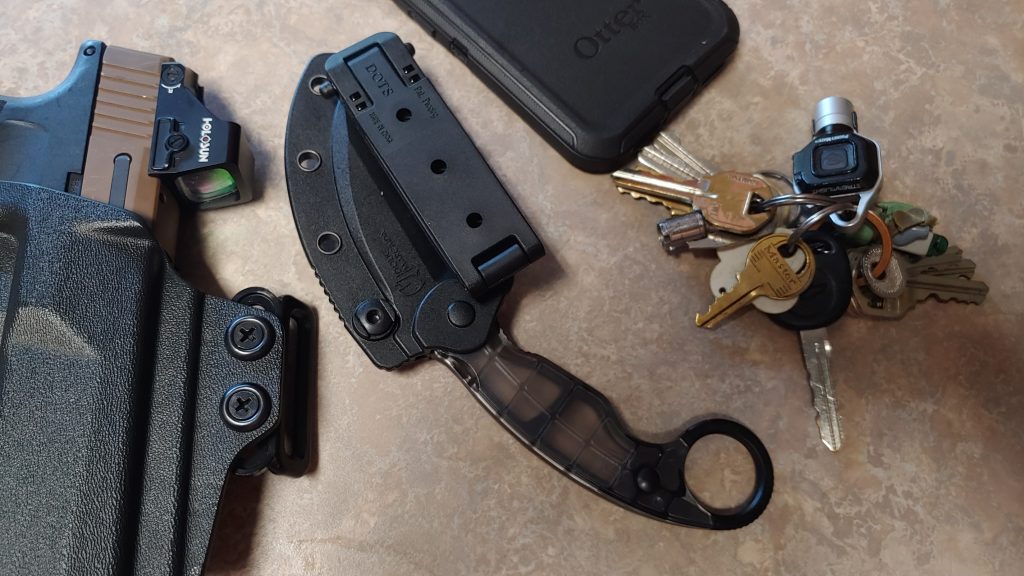 Ergonomics of the Talon

The blade might be small, but the grip is nice and large. It fills my big hands without issue and is very comfortable to grip and use. The thick polymer panels also fill the hand and keep the knife comfortable. Across the top of the blade is a small cut with jimping that allows you to rest your thumb on top of the blade. 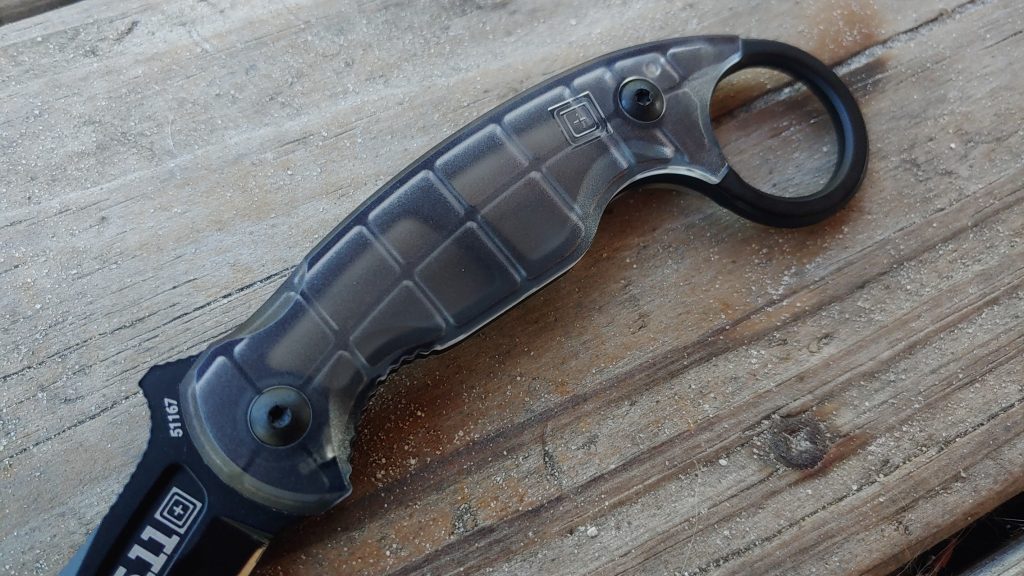 This allows you to control the blade as it slices and provides more leverage when your drive the blade through a target. The Talon is also extremely light. Light’s good when it comes to carrying a fixed blade knife. On top of being light, it’s also thin.

Thin is good, and thin helps ensure the weapon remains concealed until it’s time not to be concealed. The included polymer sheath makes it extremely easy to carry the Talon in a multitude of configurations. The belt attachment point can be moved to allow for different carry angles. I prefer a nice straight-up design that’s perfect for an appendix position.

It’s very easy to carry and conceal. The sheath and overall design allow it to disappear on your body. Additionally, the grips are not aggressively serrated or textured, so they won’t rub you raw. Your retention comes from the ring, so the grips do not need a G10 like texture. 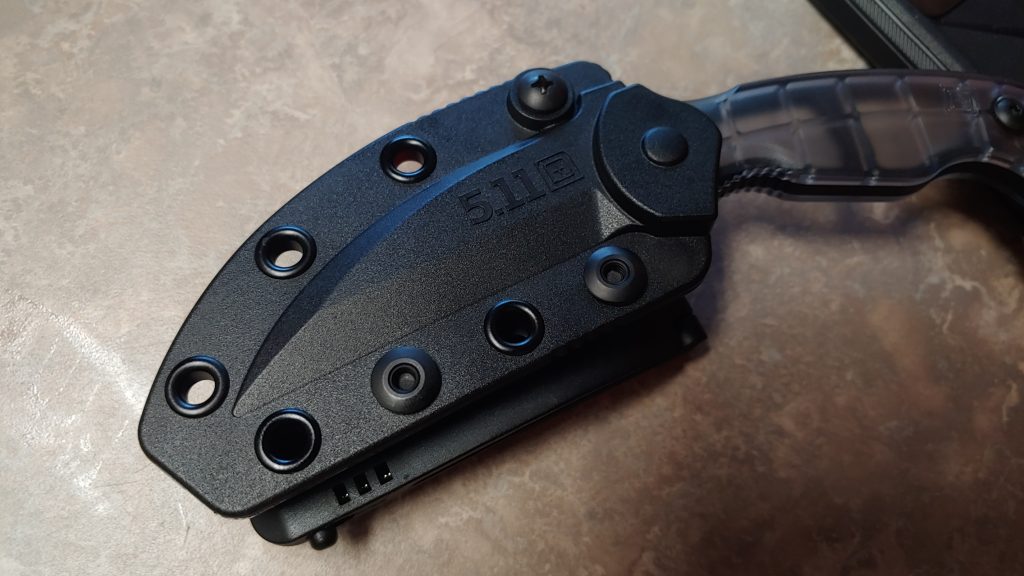 I mentioned the grips, and I should also mention they are clear for a purpose besides looking cool. The clear grips allow the knife to better conceal and naturally camouflage itself with your body or clothing.

The Talon is a slice and dice tool that’s perfect for emergency self-defense. You can swipe, slash, and rip through an opponent, or a chicken breast, with ease. It’s lightweight and very thin, and when paired with its sheath, it disappears on the body. It’s not your normal EDC knife, but you could certainly do normal EDC tasks with it. The Talon is an outstanding knife, and this team-up of 5.11 Tactical and Doug Marcaida is quite fruitful, if I say so myself.