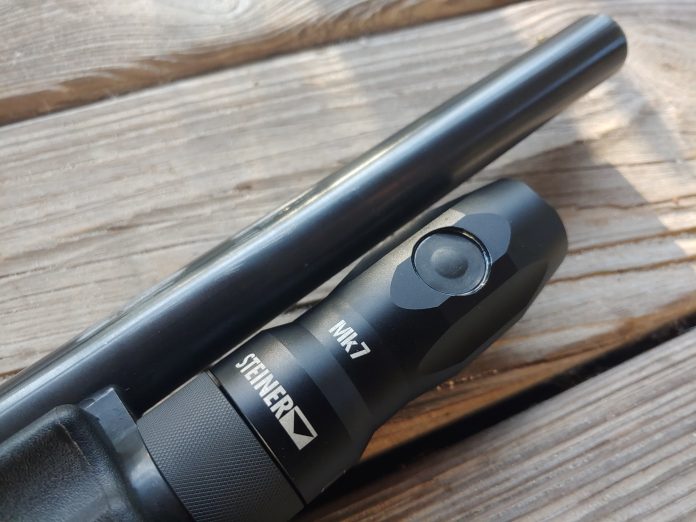 Lights on a shotgun can be tricky. Surefire has the DSF series, Streamlight just introduced the TL Racker, but Steiner has had a little known light around for a few years now known as the Mk7. The Mk7 Battle Light is a dedicated shotgun weapon light that takes a novel approach to add a weapon light to your shotgun. Instead of attaching to the pump, or to an added Picatinny mount, it attaches to the magazine tube.

It replaces the end cap and keeps your shotgun sleek and slim compared to other guns. I’ll go ahead and say it now, the Mk7 Battle Light isn’t well known for a few reasons. First, shotguns aren’t nearly as popular as they once were. Second, it has a lot of problems and the original over 200 dollar MSRP was a tough selling point when compared to the Surefire. The Surefire DSF is a more ergonomic option that’s nearly twice as bright for only a little more than the Mk7.

At over 200 bucks this light is a hard swallow, but at 50 bucks with free shipping, it’s much more digestible. Steiner is clearancing out their last few Mk7 Battle Lights for only 50 bucks with free shipping. The Mk7 Battle Lights are compatible with the Remington 870, the Mossberg 500(Not 590), the Beretta 1301 and Benelli M4 and Nova. The Benelli models are sold out, but there seems to be plenty in stock for the other guns.

I grabbed one for my Remington 870 and have been handling it quite a bit as of late and have spotted a few strengths and weaknesses of the design. Functionally it’s a tough, dependable light. Regardless of its design or ergonomics the light itself is well made.

It’s bright and casts a white and clear light well beyond the range I need in my home, and beyond buckshot range anyway. The light casts a 10-degree beam and uses a TIR lens that optimizes the beam. The Mk7 is a 350 lumen light and has a relatively short 1 hour run time and it’s powered by a single CR123A battery.

The light is made from all metal and features a recessed lens for extra protection. It features two switches positioned on opposite sides of each other. The Mk7 only has one mode, constant on. There is no momentary switch. The light weighs only 4.1 ounces and is roughly 3.5 inches long. Installation is simple, it replaces the magazine spring cap directly. It’s a two-piece system the first piece attaches to the tube and holds the spring in place. The second portion is the flashlight and this threads onto the first piece.

The two-piece design makes it easy to remove to swap batteries without a spring flying out at you. The Steiner Mk 7 is a well made, fully functional light. How does it work in action though?

The Mk7 in Action – The Good

The Mk7 has a number of strengths outside of being a well-made light. From an operational standpoint the Mk7 is very lightweight and doesn’t weigh your shotgun down. One of the strengths of a shotgun is it’s close quarter’s use and a close quarter’s weapon should light and quick.

Compared to other weapon lights the Mk7 is very lightweight, especially when stacked up against lights like the Surefire DSF and Streamlight TL Racker. The Mk7 can be removed to be used at a handheld light without comprising the weapon’s functionality. Not all situations that require you a light require you to point your gun at everything.

Lastly, unlike most other light options the Steiner doesn’t move as you pump the weapon. The light remains in one constant place.

The biggest and most apparent downside is having to reach forward of your pump to activate the weapon light. This can make it hard to reach for those with shorter arms. I’ve come up with my own means to reach the light while holding onto the pump of my Remington 870. I’m holding the very front of the pump and resting my index finger on the On switch.

On guns with extended tubes you may not be able to reach the light in a firing position. This specific Remington has a standard 4 round tube and that seems to be the perfect length for reaching the Steiner light.

As far as weapon lights go another downside is the fact the Steiner lacks a momentary switch. Another downside is that if you are running a tube extension you have to remove it to mount the Mk7. This means you could be dropping a 2 to 3 round addition. Shotguns already have a low capacity so sacrificing some rounds for a light may not be for you.

The Steiner Mk7 is just another option in a field of options. It does certainly have its pros, and being lightweight, and easy to handle is one of the primary reasons I like the light. It keeps the gun balanced. My home defense shotgun and my home defense plan is to point my shotgun at my bedroom door and call the police. In this role, the light works perfectly.

Again, if the light still cost over 200 bucks I wouldn’t be a buyer. However, at 50 bucks this is the cheapest high-quality shotgun light currently on the market. It’s well worth 50 bucks and it’s unique design makes it noteworthy.