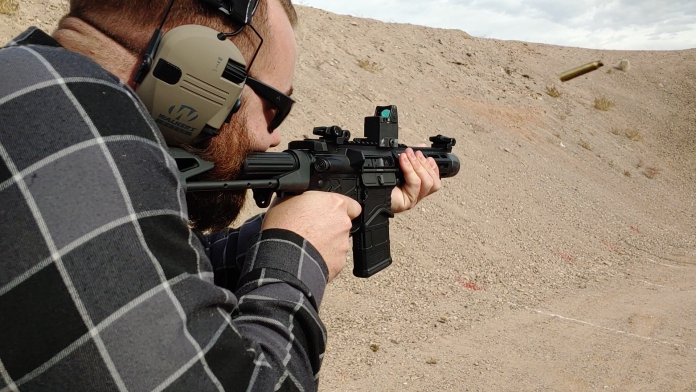 To be honest, after handling the Aero M16A4 clone with its wonderful full stock and 20-inch barrel it’s hard to go back to a short-barreled AR 15. They tend to be rough, concussive, and full of bright muzzle flash. They simply aren’t comfortable compared to the classic 20-inch barreled AR. One simple fact remains, the shorter the barrel the rougher an AR can be. The 5.56/223 is designed to be fired from a 20-inch barrel, so when you trim it down to a 5.5-inch barrel like the Edge PDW you expect it to get rough.

That’s just a trade-off of having a short barrel. However, to be fair the Edge PDW seems to mitigate a bit of the effect of a super short barrel. The first key to the gun’s easy handling at Range Day seems to be the weight of billeted receivers. The gun’s overall somewhat hefty nature lends itself to easy handling. It’s not as light as you’d expect, but it’s not heavy either.

The best feature that lends itself to making the gun comfortable is the linear compensator at the end of the barrel. It directs gas, muzzle flash, and concussion forward of the shooter. It’s not pleasant if you’re downrange, but I doubt that is the biggest problem you have at that time.

Topping off the Edge PDW

To top off the Edge PDW you have a number of different features. First is a specialized grip for PDW sized guns. This Reptilia grip is designed for short-barreled rifles and works well in that regard. The Edge PDW is a mere 18.75 inches overall and this specific grip is comfortable for guns this small.

The PDW pistol brace is a Maxim Defense model and it’s largely accepted by the firearms community as the best PDW brace out there. The gun is also topped with actual sights. For some reason gun companies, these days seem to hate including sights onto their guns, but Springfield bucks the trend with spring-loaded, all-metal, flip-up iron sights on all of the Saint series rifles and pistols.

The Edge PDW comes with a short M-Lok rail system and a hand stop which you’ll need for safety reasons with such a short gun.

I had minimal time with the Edge PDW, but I found it to be a very capable, easy handling, and fun shooting rifle style pistol. Stay tuned because I hope to have an Edge PDW in for full review soon.