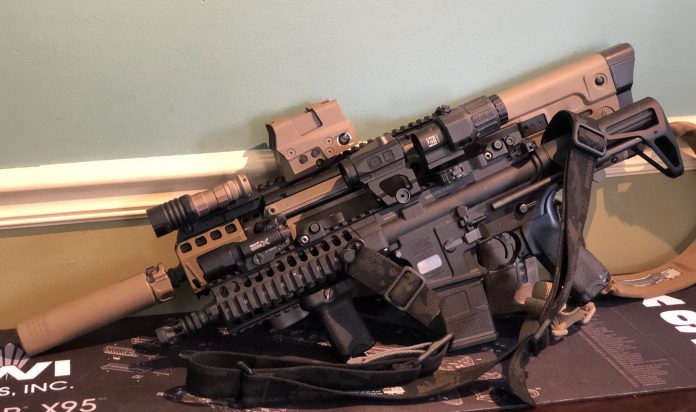 Why is there such a near insatiable demand for small carbines? That is perhaps a redundant phrase, but carbine and rifle have been on a slow meld together since WWI, when the M1903 was produced in a single length. It is also the ‘all squares are rectangles, but not all rectangles are squares’ sort of situation. Practically speaking, the terms rifle and carbine have become interchangeable, with no hard line in between them. The M16 is a rifle while the M4 is a carbine, but the M27 is an… Infantry Automatic Rifle? But also a service rifle/service carbine?

And that is just the United States Marine Corps.

Barrel lengths that pop up when I search for AR-15 barrels in Ye Olde Five Point Five Six go thus.

And I am certain there are more…

It seems like the soft rule is that 16″ starts carbine.. but it also starts rifle.. but maybe 14.5″ does.. but nobody for sure knows…

The point being, only four of those barrel lengths are above the federal legal standard for ‘Rifle’.

With minor permanent modification, the next three on the list can be made to be ‘rifle’ length as well by affixing a muzzle device of sufficient length. The result are shorter carbines, with some being pistols and firearms by legal definition. These shorter barrel SKUs tend to vanish into the ‘Sold Out’ ether as quick as you can shout “In Stock Notification!” while longer barrels will sometimes sit a moment or two before joining their shorter brethren on the journey.

Simple, the market loves short guns. The market loves all guns really but it really loves it some SmolGun. Hence SmolGAT Project, a look at why we love these guns and what we use them for. Are they really that practical or are we just giving people what they want?

Let’s talk about the cool factor first. As this does have a massive influence on why.

We are heavily inundated with cool people, doing cool things, with these cool guns. SBRs are part of Pop Culture. There are practical aspects as to why, we will get to them, but let us not underestimate the rule of cool. “Neat,” sells a ton of stuff. Marketing imagery can make or break good products, and sell bad ones. The operators who operate operationally are usually packing some compact highly mobile hard hitting hardware to accomplish their part in the violent on-screen adventure.

There is nothing wrong with getting a gun you want, just because you want it. Hell, that’s cloners in a nutshell. They are chasing after specific, often outdated, military tech because they want it. SOPMOD Block I and Block II type builds are a little dated by 2021 standards, but they work and they’re cool. If that and a can of OD or FDE spray paint get someone out running B8 Drills on a timer, that is a win. If popular culture made that happen, with a movie, show, or game, then good for that movie, show, or game.

We’ve scaled carbines down further and further (and then back up after the 10.3″ MK18, at least for DoD) for one reason above all.

The Euro Bullpups of the 70’s and 80’s, the FAMAS, the AUG, and the L85A2 (we ignore the A1 like it is Metallica’s St. Anger album, it was a dark time in British small arms) were for the express purpose of making it easier for troops to move in and out of the tight confines of APC’s and into the cramped streets and towns of Europe. It was done to make movement easier against the Soviets.

The scaling back up of the MK18 and the entire bullpup concept also bank on losing as little performance from the round as we can manage while gaining as much mobility. Lengths are picked for requirements, the MK18 was to get a suppressed AR in the same size as the M4, since adding a can to an M4 makes it as long as the M16 again, which they got away from for mobility gains in the first place.

It’s the delicate seesaw of removing as much length as you need to fit the requirement for size while keeping as much barrel as you can to not negatively influence effectiveness.

I was long of the mindset, “Why would you give up barrel length?” being the loyally dense young jarhead and loving my M16A4, I believed the Corps was infinitely wise to keep that rifle… ha. Turns out there are some well reasoned and data backed counter arguments. And before my time in the USMC was done they had quietly acquired the M27 to replace the M16A4 and M4 (although they will never admit that was the plan the whole time).

I entered the SmolGame with the LWRCi M6A2 PSD, pistol braces weren’t the thing yet, so SBR it was. I wanted a miniature M16 that was ‘bag mobile’ small and concealable legally, the little L-Dub carbine did both (still does). I wanted as small as would still run. Later I read the same terminal ballistics testing, reliability and wear data, and other various publications that indicated I had perhaps erred slightly and limited myself…

I say perhaps for two main reasons, 1.) after modifying the gun to add the shorter Maxim stock it fits in a Revelation II snugly. 2.) it is still compact, accurate, and agile which are all the requirements I wanted in the first place.

One of the trade offs, SOCOM found this too on the MK18’s when they weren’t suppressed, is noise and flash signature. This is unquestionably the loudest rifle I own. It serves its role admirably well, it just isn’t quiet about it. The 8.5″ barrel means my effective terminal ballistics at distance fall off sooner too, not a fact to dismiss depending upon your needs. That said, it still packs more punch per trigger pull than an equivalently sized 9mm, I see no reason to retire it.

IWI came along and solved my concerns by announcing the 13″ X95 would become available as conversions and factory SBRs. I ordered one immediately.

I finally received the tax stamp and got to take the next Tavor course with my own Tavor! (My 4th or 5th I believe) and it was worth every second of the wait. Not that I would wait again, I got an FFL/SOT for a reason… waiting sucks. It was just worth it.

I have spent the time since making sure my light and sight selection fit what I wanted the little rifle to do, which was anything I ask it inside 300m, and more quietly than the LWRCi.

The X95 is a pinnacle in small rifle tech at the moment, the 13″ barrel pumps velocities back into the very respectable realm near the M4, SCAR and other carbines, to generate the desired effects with the various ammunitions available. But, the overall length is less than an MP5k PDW (22.8″ X95 vs 23.75″ MP5k PDW). I made mine slightly longer for comfort (Manticore Buttpad) and silencer use (Surefire WarComp).

What resulted is the practical effect that all shorter carbines are looking for, an easily maneuverable rifle that I can move into and out of smaller spaces with. It is my home defense rifle for that reason above all else, its easy to move with, its easy to use my off hand while shouldering it (to get a door, move a person, flip a switch, dial a phone, etc.), still short with a silencer on the end, and capable of completing any task I would ask my M4 to do.

Other shortened firearms can possess these traits to varying degrees also, they come with their own inherent strengths and limits, and your own familiarity helps shape your perceptions and preferences even further. But there are good fits out there for the role, in several calibers, and with all manner of options.

Because we’re a bunch of size queens. That’s why.