It’s a complete package that ships with everything you need to get on target in addition to vouchers for three Sage Dynamics rifle courses. Sage Dynamics offers a wide range of courses for civilian shooters and military and law enforcement alike.

Together with Primary Weapon Systems, Sage Dynamics wanted to create a rifle that would be suitable for their entire curriculum, which covers everything from self-defense basics to active shooter response training.

The result is a premium gun that hosts a feature set quite unlike other production rifles. While some of the features are becoming more popular, all together they really do set the SD-1 apart, and that’s not because of the Kryptec Typhon finish on the handguards and receivers.

The SD-1 is built using Primary Weapons’ profile 16-inch barrel. Chambered for .223 Wylde — a hybrid chamber that shoots both .223 Remington and 5.56 NATO with equal reliability and accuracy — the chromoly steel barrel has a medium weight profile with a smooth QPQ nitride finish. PWS barrels combine the precision of competition rifles with the durability of hard-use duty rifles.

Optimized for a wide range of bullet weights, the barrel has a 1-in-8-inch twist and is capped with PWS’s proven FSC flash suppressing compensator. The FSC is a combination muzzle device that puts an emphasis on braking and muzzle control. While it’s no substitute for a flash hider when suppressing visual signatures, it’s one of the better-performing compensators on the market and it won’t throw fireballs left and right. When it comes to fast, accurate shooting, muzzle control comes first and the FSC is one of the best options out there.

The SD-1 Carbine is suppressor-ready with a Gemtech adjustable bolt carrier group or BCG. Gemtech’s BCG has a two-position selector that restricts the gas flow through the bolt carrier group when running suppressed. This keeps fouling down and reduces stress on the core components of the carbine, which means more rounds between maintenance cycles, lower failure rates and an extended life cycle.

It’s also an “enhanced” bolt carrier, which means tighter tolerances and a more precision fit inside the upper receiver and recoil assembly. This reduces wear, improves performance even in less than optimal running conditions and adds a edge in terms of accuracy with its tighter lock-up.

Like most Primary Weapon Systems rifles the SD-1 carbine ships with a modular KeyMod rail. The free-floating handguard measures in at 15 inches long and extends right out to the muzzle to accommodate the longest grips. It has a full-length Picatinny rail for optics and accessories, like the weaponlight shown in the photo. While the light isn’t included with the carbine, the Magpul backup iron sights are.

Also included is a Magpul STR stock, MOE pistol grip and 3.5-pound flat, single-stage CMC trigger. The Railscales are sold separately but they’ve tossed in a discount code for the KeyMod accessories. The rifle ships with one 30-round PMag where available in a custom hard case for $2,100. That includes the three rounds of training with Sage Dynamics. 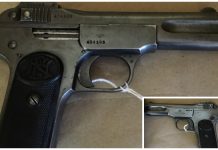 What Handgun Represents Your Generation