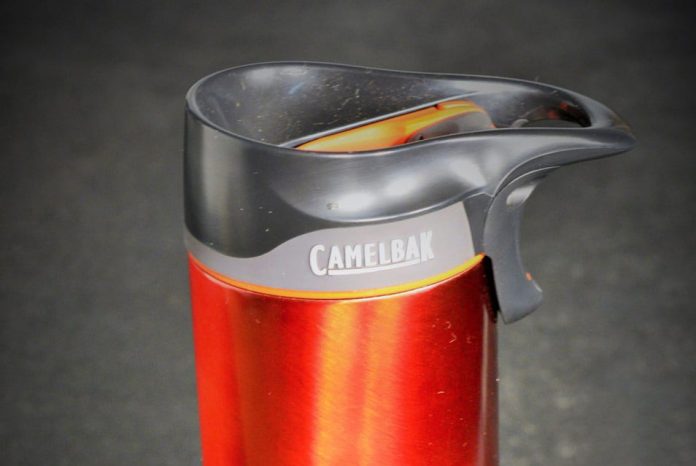 Earlier this year I received a pair of CamelBak Forge travel mugs to review. When I got the cups they felt really well made and I was excited to give them a go because I’m always on the hunt for a better travel mug. But before I get into the review, I thought I’d share the story behind this cup. 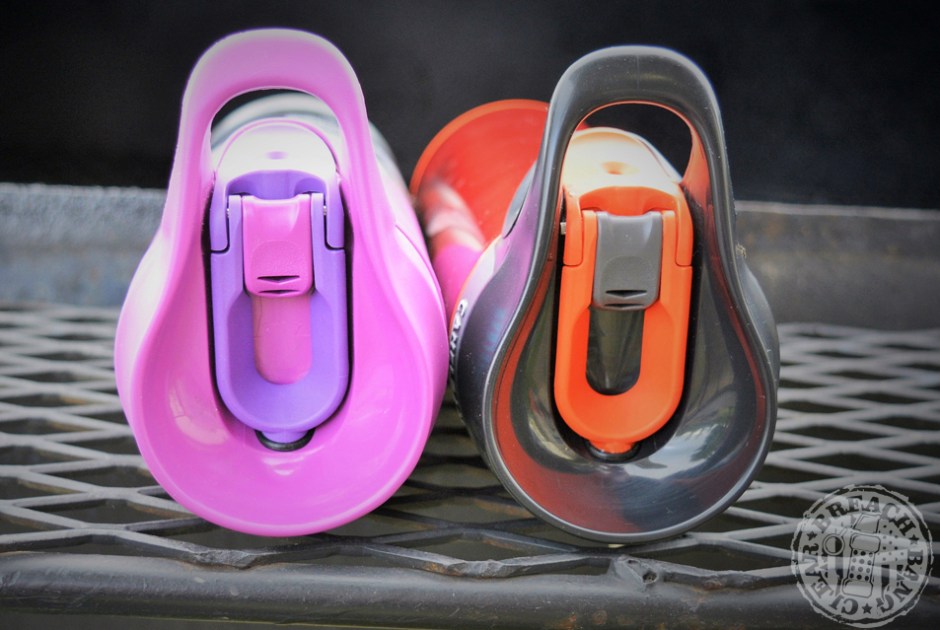 I had a trip coming up in a couple days, so I figured “what better time to test a travel mug than on an actual trip?” So I packed my bags and headed for the airport with cup of coffee in hand. At the terminal I was in a bit of a rush because traffic made my fifty-minute commute even longer, so I hurried through the ticket counter and into the security line.

After I passed through screening I was pulled aside and asked if they could check my bags. Of course I said yes, while secretly praying I didn’t have a stray knife or bullets banging around the bottom of my carry-on. The agent reached in, pulled out my CamelBak Forge and asked, “What is this?”

I said, “It’s a fuckin’ coffee cup. What does it look like?”

He opened the cup to expose about two sips of coffee in the bottom, and said, “I’m going to have to take this.”

“Sir, you’re not allowed to bring outside liquids into the terminal.”

“Sir, I can’t let you do that. You can take the cup and go back through security, or I can dispose of it for you.”

“Fuck that. I guess I’ll have to go back through.”

He looked at me like I was crazy. I’m crazy?, I thought. You’re the one who thinks a few drops of coffee is a threat to national security. He then spotted the Marine Corps pin on my lapel and asked if I was veteran. I said yes and we talked for a minute. I was thinking, “This ass clown is trying to run down the clock so I don’t have time to go back through security, then he can take my cup.” In the end he did me a solid and dumped the coffee in the trash. But that was one of the strangest occurrences I’ve ever had in the security line. So I immediately headed for the coffee bar and filled it back up again for the flight. 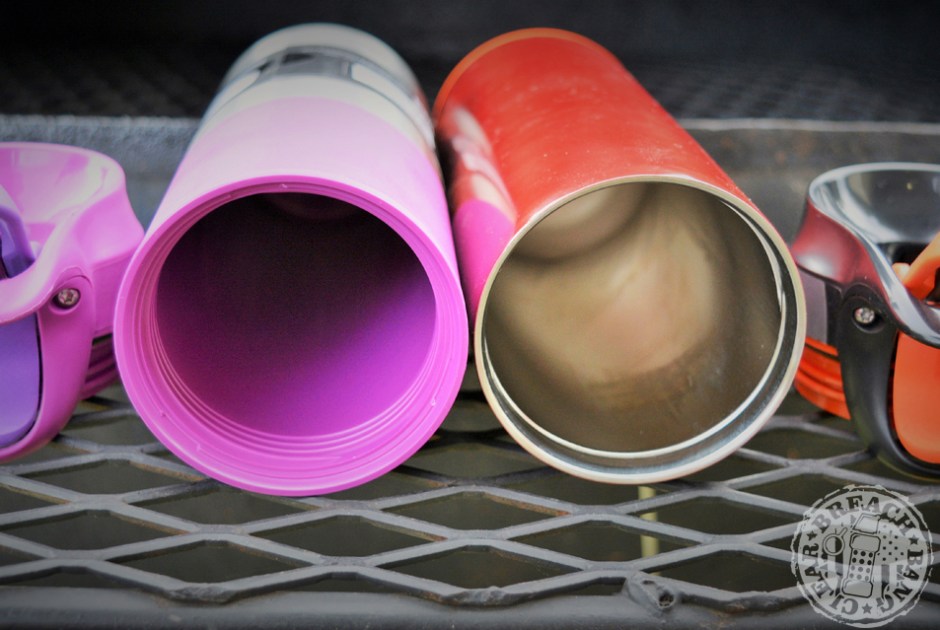 Fast forward to the hotel. I was at the breakfast bar, getting my morning cup of Joe. I set the cup down and walked to my table to get a spoon. When I turned around some fool was picking up my cup. I said, “Hey that’s my cup.” He set it back down, said, “Sorry, I thought it was mine,” then shot out the door. WTF, I was thinking, I know it’s a cool cup, but damn people, you can get one online. Ever heard of Amazon, losers?

Later that afternoon at the event I attended, said cup grew legs and walked away, never to be seen again. I couldn’t help but wonder if that’s why CamelBak sent me two of them. Unfortunately I had given the second one to my wife so I could get her opinion as well. Well, she had no intention of returning that cup to me, so I got online and ordered her a new purple CamelBak Forge Divide so I could get this one back and complete the following review. 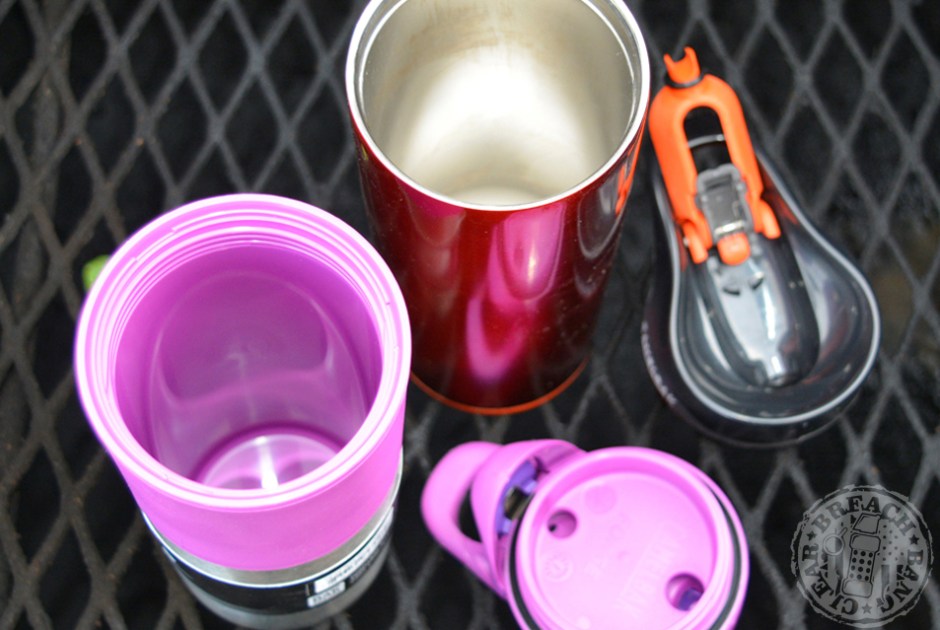 The folks at CamelBak have always been on the innovative front when it comes to beverage containers. Just look how many copycat companies were spawned after their original water reservoir design so many years ago. The cup’s features are pretty standard, but CamelBak has reinvented some of those features. I for one like the way they put it together.

The cup is 16oz standard, tall and narrow so it fits snugly in my truck’s cup holder. It has a hard plastic bottom designed to reduce impact if dropped, and an attractive brushed finish. The finish is completed with a translucent powder coat on mine, but color and finish options are endless and I bet more options are on the way. The vessel is the traditional stainless steel double wall vacuum sealed with a screw top lid. The lid has an O-ring seal that doesn’t leak. You can toss this filled cup in a ruck with no fear of it leaking all over your kit. I have dropped it full and the lid didn’t separate, and although I can’t guarantee this would never happen it seems unlikely with a moderate bump or fall.

The lid doesn’t appear to have a vent, so there is no potential for leaking when over pressured. The pour spout is unconventional, with a push button open, and unlike other models it doesn’t vent straight up when depressed. The pressure comes out of the drinking spout sideways, so you don’t get those little coffee-in-the-eye splashes that usually ruin an otherwise great vacuum-sealed mug.

The push button is very heavy and unlikely to open with a bump, and is sealed with another O-ring at the pour spout. If you depress the button all the way the flow is quite substantial, which is perfect for me since I’m not a coffee sipper, I’m a coffee chugger. If you’re using it for an after-workout drink or just water, the flow is excellent for that.

If you remove the lid and fully depress the button it’ll pop up for cleaning. allowing you to remove and clean the O-ring and its seat. Lastly there is a lock-open feature: you simply push down on the catch while depressing the button and the pour spout will be held to a half-open position. One of the cup’s greatest innovations is the shape of the lid, because as I take that last sip of coffee with a traditional travel mug because my nose always touches the lid. Often this results in a brown stain on the tip of the nose. There is nothing worse than walking around your place of business with a brown nose, and this cup eliminates that problem. Unless you like being a brown noser, but that’s your business. 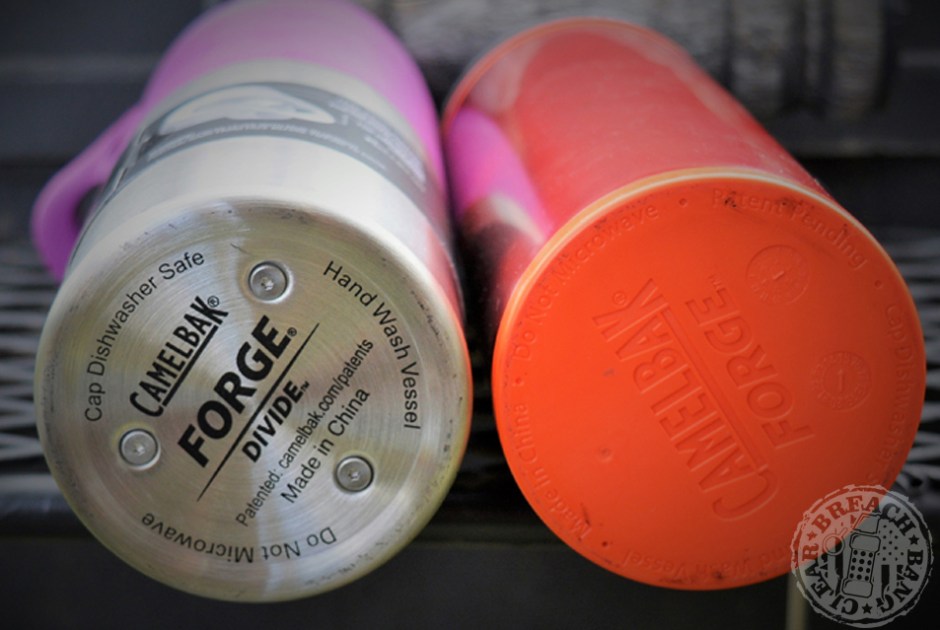 For my very unscientific heat retention test I drank a full cup of coffee or three, you know, to preheat the cup. Then I filled the mug completely and hit the top of the liquid with a laser thermometer. The temp registered 143 deg F. I then secured the cap tightly and set it in a shady area of the kitchen for exactly five hours. After the time expired I unscrewed the lid and hit it with the thermometer again. The temp registered a whopping 119 degrees. That is only a 24 degree temperature loss in five hours. I don’t know how well it performs in freezing temps or how cold it keeps beverages in the hot sun, but I don’t have to go too far out on a limb to guess it’s better than most. For the Forge Divide I suspect heat retention would be less because the vessel is plastic and construction a little different. But at half the price it is still a wicked cup with a leak proof lid, and when someone takes it from you the sting would also be slightly less painful. 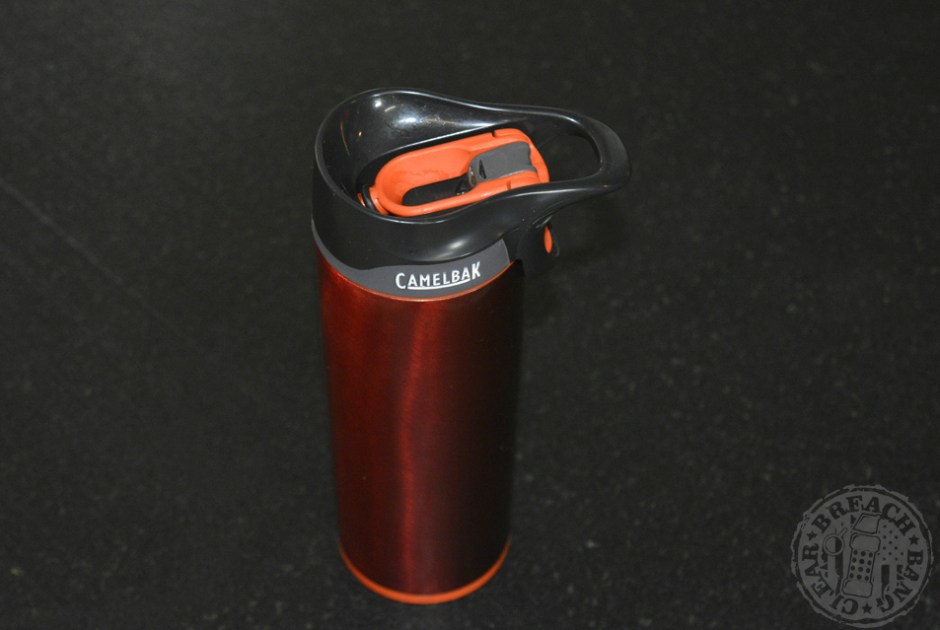 Vitals
• Double-walled, vacuum-insulated vessel
• Leak-proof cap is easy to open and close with one hand
• For frequent sipping, just press the top button to lock the cap open
• Impact-resistant cap helps prevent dents or cracks
• Use the loop in the cap to carry the bottle in the crook of a finger or carabiner
• Cap won’t collect grime; cap arms flip up for easy cleaning
• Dishwasher safe
• BPA free
• 16oz capacity, fits in vehicle cup holders
• Keeps beverages hot for 4+ hours

The CamelBak Forge travel mug is definitely among the best travel mugs I’ve ever used. The leak-proof design, wicked thermal retention and ease of cleaning make it the ideal travel mug for me. I have given many a mug the old heave-ho right into file 13 but I have feeling this one will be with me for a long time. That is, unless some sticky-fingered freeloader decides to liberate it from my coffee-wielding oppressive regime. ‘MERICA!