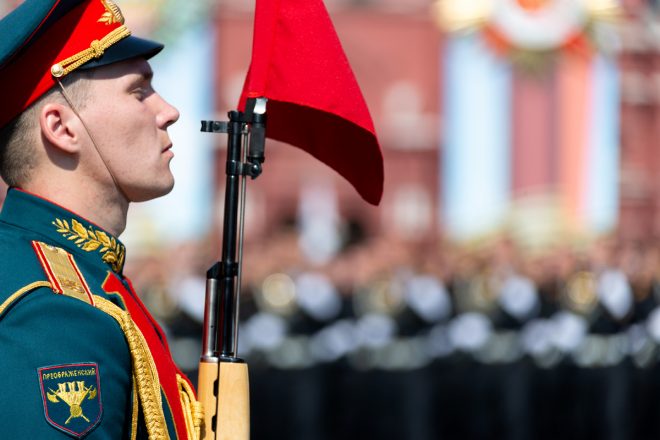 Throughout Russia this week, large military parades with lots of interesting hardware were showcased as the country celebrated the anniversary of victory in World War II.

The 74th annual parade, held on May 8, commemorates the end of WWII in Europe in 1945. Across the world’s largest country on Wednesday were held no less than 30 large events with the biggest show taking place in Moscow’s Red Square. I mean you have to love a good Russian SKS. Psst, this one is for sale. (Photo: Guns.com) Don’t forget the obligatory T-34 tank. Russia recently traded the government of Laos for a whole battalion’s worth of these relics the Southeast Asian country had in storage There was also some newer equipment on hand Such as this 2S19 Msta 152mm self-propelled howitzer And these giant pickles As did these Guards Airborne guys with the funny wife beaters Members of the Zhukovsky-Gagarin Air Force Academy (blue) along with the missile troops of the A.F. Mozhaysky Military-Space Academy (green) Meanwhile, one of the neatest smaller events was held in Kola Bay near Murmansk in the Russian Arctic.  There a recreation of the Petsamo-Kirkenes offensive of 1944 was staged complete with not only a T-34 and DP-28-armed bike but also all sorts of other vintage hardware to include Mosins and PPSh SMGs. More photos here if you are curious.