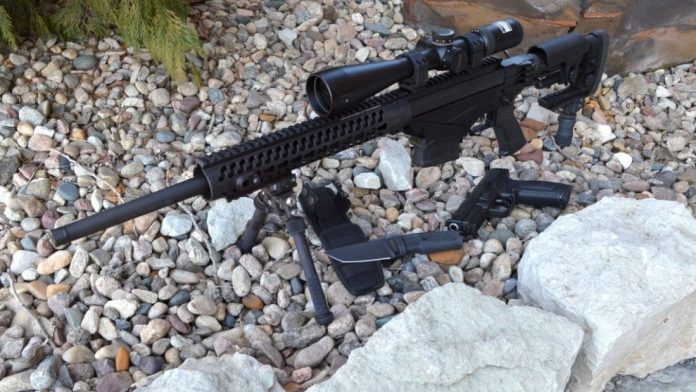 When Ruger introduced the new Ruger Precision Rifle there was certainly a lot of fanfare. The press went wild, but the reaction by some retailers was one of caution and skepticism.

Ruger has been known for the durability of its firearms, but not necessarily precision. The manufacturing technology and engineering capabilities of Ruger today are significantly upgraded from where they were just a decade ago. Ruger has clearly taken advantage of those capabilities on its new firearm introductions over the past few years. The Ruger Precision Rifle is a benchmark representation of all of those incredible engineering and manufacturing technologies coming together.

The pre-release reviews and accuracy claims had already started to pour in with the 6.5 Creedmore variant, but nothing had been noted on the ones chambered in .308 or .243.

Like many, I was still skeptical — was it just the proven 6.5 Creedmore round making the new Ruger look good, or had Ruger really done their homework for the .243 and .308 models to deliver accuracy as well? Customers will be relieved to know the Ruger Precision Rifle is stunningly accurate by any standards in any of the three current offered calibers.

We got our hands on the .308 and .243 models to test the accuracy against similar Howa, Savage and Remington .308 builds. Within the first 20 rounds, the Ruger .308 Precision Rifle delivered pinpoint five-round, 1.5-inch 300 yard and .3 inch 100 yard groups with Hornady 168gr A-Max ammunition. The .243 model delivered very similar groups. In fact, many Ruger Precision Rifle shooters are reporting and posting essentially single hole 100- yard groups with all three models.

The 6.5 Creedmore is, of course, the top performer at very long 1000+ yard ranges. However, none of the models are significantly better on the 100-yard line. What I noticed immediately on both my tested rifles was that the Precision Rifle also delivered a level of ergonomic comfort, personalized adjustment and recoil management, which is expensive to reproduce only through upgrades on other factory rifles.

Ruger combined everything a competitive or precision shooter wants in one off-the-shelf package, which requires nothing more than match ammo, a good set of scope rings and optic to deliver on that precision. The action is extremely accurate and smooth, the barrel is threaded and ready for muzzle brakes or suppressors and Ruger wrapped the action in a true match trigger and magazine box-fed modular billet precision rifle stock. All of this for an extremely competitive $1,400 MSRP. A Remington, Howa or Savage with matching precision and similar features would easily touch the $2,000 mark excluding customer gunsmithing.

To understand a bit more about Ruger’s design intent, we reached out to the Ruger’s Chief of Marketing Ken Jorgensen with a few questions retailers and customers are sure to ponder. Jorgensen rallied the Precision Rifle design and product management teams to consolidate and provide answers to a few of our questions.

SSR: What was the inspiration of the Ruger Precision Rifle line?

Jorgensen: There are several contributing factors in the development of the Ruger Precision Rifle. We saw a growing interest in long-range shooting, but noted many of the rifles available commercially or being built by the shooters were very expensive. This seemed [to be] an opportunity worth exploring. A number of people at Ruger, including CEO Mike Fifer, have spent time at FTW Ranch in Texas doing long-range shooting. This lead to an interest in a dedicated rifle. One of the design engineers is a long-range shooter and was very tuned in to the expectations of shooters and the capabilities of Ruger design and manufacturing. All these interests came together in the Ruger Precision Rifle.

SSR: The public response has been pretty significant. Are the sales indicating that Ruger has another top selling firearm on their hands?

Jorgensen: The demand has been very good and it would seem that the Ruger Precision Rifle delivers a rifle shooters see as a very desirable product and a great value.

SSR: Which model has been the top seller?

Jorgensen: At present, we are mostly shipping in 6.5 Creedmoor and .308 Winchester. The 6.5 Creedmoor is of primary interest to many. The folks interested in the rifle and its capabilities are knowledgeable about long-range shooting and the reputation of  the 6.5 as a long distance cartridge is well known.

SSR: Are there considerations for offering smaller and much larger calibers models as well?

Jorgensen: There will be other calibers in the future.

While it’s clear from the folks at Ruger that the company built a long range competition rifle by shooters, for shooters, we wanted to hear what retailers out there thought of the rifle’s prospects. Sales managers at Cabela’s, Scheels and two other independant local firearms dealers all indicated they cannot keep any of the Ruger Precision rifles in stock. All went on to note that every Ruger Precision Rifle is currently sold before they even hit the shelves.

One sales manager noted that in some situations, customers do not even care what caliber is available and are buying up whatever caliber is coming in. The Ruger Precision Rifle delivers everything a long-range shooter could want with accuracy far beyond what customers expect from a stock rifle. If this is the new standard Ruger is setting for precision, we all might have to start thinking of them in terms of “precision” instead of durability.