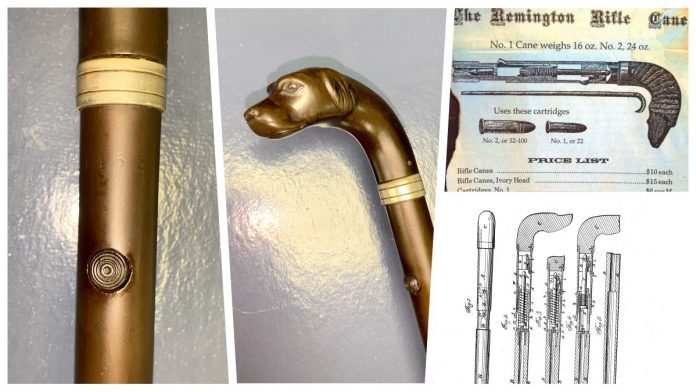 “This arm is new in its construction and character, combining the advantages of Walking Cane and Rifle,” billed Remington on their  Rifle Canes, which were in low-rate production in Ilion, New York between 1858 and 1888.

Just the ticket for curbing an attack from a rabid animal or a rapscallion along the highway, this trusty cane belongs to another era.

Hailing from the day in which a gentleman would be educated in the manly arts of boxing and stand ready to sally forth to tackle the occasional brigand, cane guns were offered from gunmakers in mid-19th Century Western Europe. To update the market with a more American take on the concept, Remington began producing its own Rifle Cane just before the Civil War.

Patented by Remington gunsmith and master mechanic, John F. Thomas in 1858, Big Green’s gun was arguably superior in many ways from what was being offered across the pond. More cane-like than the typical bamboo- or steel-shafted devices hailing from Belgium and England, it had a self-contained single-shot firing mechanism in the top half of the rifle and could accept several different heads, ranging from carved dogs to traditional L-shapes and balls.

The steel barrel shaft was encased inside the brass cane and the whole thing had a thin coating of gutta-percha, a natural latex with hard rubber-like properties. The 1858 patent drawing. Thomas would later renew it in the 1870s and would go on to become an opera house owner. Of note, it was Remington’s first rimfire long gun offering. The trigger on the Remington Rifle Cane is a button located on the bottom side of the handle’s shaft. Pulling back on the handle would cock the trigger button. The company produced a No. 1 and a No. 2 version, with minor differences.

The handle unscrewed to allow the breech to be loaded and unloaded, with the latter task typically needing a ramrod, which was not included. The example here has the small dog’s head cane top, which was only used on the .22-caliber version. Remington also offered a larger head on .31- and .32-caliber canes as well as curved and right-angle L-shaped heads and balls. Aftermarket heads are also often encountered on these guns– when the guns themselves are encountered at all. The tip of the tapered steel ferrule could be removed before firing to keep it intact or, in an emergency, fired through, as it had a cork-capped channel through the middle of it. Barrel length ranged from 6- to 10-inches, with the .22-caliber version running on the shorter end of that spectrum.

As noted by Remington Rifle Cane collector Elliott L. Burka, “It weighed from 16 to 24 ounces, looked more like a true gentleman’s cane, was less cumbersome, and was not as obvious as were the other cane guns that were on the market at that time.”

Offered in .31 percussion, .32 Rimfire and .22 Rimfire, all black powder, the Remington Rifle Cane remained in production until around 1888, with less than 4,500 of all types made. Over the years, this pool has shrunk as old cane guns break, are lost, or discarded by people who don’t know what they have.

While modern cane guns are classified as AOW’s by the ATF, several such firearms over time have been removed from the NFA list as collector’s items due to their age. This includes numerous 19th Century cane guns such as the Remington Model 1 .22 and Model 2 .32 rimfire specimens.

They make a great addition to any gun collection and you will likely not find another firearm described as a “dapper accessory.”

ADD THIS REMINGTON CANE GUN TO YOUR COLLECTION

Love curiosities like the No. 1 Remington Rifle Cane and want to see what else we have that is in the same category? Head on over to our Collector’s Corner and prepared to be amazed.