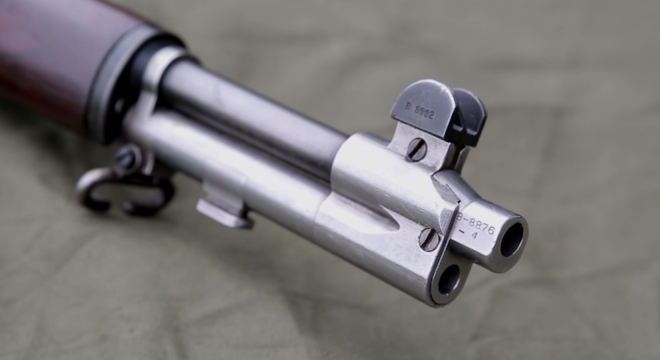 While there were some 6 million M1s produced very few of these are surviving early “gas trap” models. The eponymous gun guru behind the rifle, John Cantius Garand, first crafted a .276-caliber toggle-action gun that eventually morphed over a lengthy R&D period into the .30-06 8-shot battle legend we know of today. The earliest production models — around 50,000 guns all told — used an expansion chamber muzzle cap, or gas trap, system under the barrel to cycle the rifle’s action.

While these were replaced on later guns (and retrofitted on older ones) by the more commonly-seen ported barrels and gas cylinders today, these bulky “in the white” gas traps are easy to spot and always seem to pop up in pictures of surplus M1s snapped by war correspondents somewhere between Burma and Timbuktu rather than at your local gun range.

The funny-looking forend is covered in the above spot from American Rifleman, and in more detail from Forgotten Weapons, below.