Privilege. It’s a loaded term that has been much abused and maligned in the politically charged waters of places like Twitter. It’s overuse and improper use out of context results in the formation of a counter culture that derides every single use of it, even those that are appropriate to the situation.

‘White Privilege’ is the most poignant example. Doing a little searching, just a tiny bit of digging in the right locales and you can find out that white privilege is responsible for literally everything that is wrong ever.

But here’s one we don’t like to toss around. ‘Safe‘ privilege. Or as I like to term it, First World Problems.

Gun Control is that ultimate expression of ‘safe’ privilege. Sold by the affluent to the at risk using very manipulative marketing, the privilege of gun control is that it is often most loudly touted by those who it least affects by both voluntary dissociation and financial means to participate. The well off suburbanite in the low crime lake community can both most easily get a gun (even if they don’t want to) and is least likely to need a gun.

Mayor Lightfoot, pictured above, probably won’t personally need a gun ever. She’s the ‘Mayor of Chicago’ level of money. Now being a public figure instead of a private citizen offsets that likelihood some, but she’s still in a very low risk pool compared to certain neighborhoods of her city. Which is currently tracking about… here for violent crime.

Gun Control is a ruleset the people pushing it do not need and are least impacted by. It is put upon people who are most negatively impacted by it, ostensibly for their own safety.

That reeks of privilege.

A ‘moderately’ priced $60 permit, or background check, or any other additional tax on acquiring a firearm, above and beyond its market value as a hardgood, disproportionately harms the low income individual. It will always represent a greater percentage of their annual resource and come from a much smaller pool of resource they can afford to spend.

Gun control is a control of people of lesser means. Period. It harms the lowest income and merely annoys those above a certain economic level. For those of lesser financial means, any government imposed penalty to their access hits them much harder as an absolute percentage of their available resources. It is an unconscionable violation of their rights and an attack on their persons based upon their earning level

But it is allowed because we never frame the facts as they are in the arguments. It is allowed because it is always for their own good, or their children’s own good, as if those of lower income cannot be trusted to see to their own safety. You must be $XX,XXX+ annual income to participate in your own defense and that of your family. How utterly bizarre an argument.

If the government must exercise some tax or licensure (I don’t believe they must, it has never resulted in an attributable curb to criminal activities… except to increase them by making a new crime) then it must be leveled on the whole of tax payers to support. Everyone has the right to arms, so everyone shares the burden of the supposedly necessary regulation of the arms industry and carry of arms.

Seems only fair. But God forbid we propose that tax change to your average privileged anti-gunner, even though progressively we would be reducing financial hardship on the low income.

You go, gun controllers. Stick it to the poor. 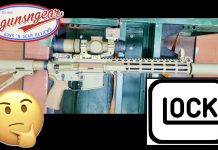