Safety is paramount, right? Well, when you own guns, a safe is just part of your life. Modern safes come in all shapes and sizes, and today we are looking at one of the mini handgun safes designed for handguns. The Pineworld K5 offers you a high-tech safety solution that allows you to both secure your firearm and also to have easy access to it. If you’re not carrying a firearm, it should be secured, correct?

At the same time, you may need rapid access to that gun for defensive purposes. The Pineworld K5 promises to grant you that without compromising security. I’ve been testing the K5 for about a month now, and their promise rings true.

First the foremost, this is a handgun safe. It’s small, but not micro-sized. At 16 pounds, it can be snatched and grabbed, but the safe is designed to be either bolted down or cabled secured to ensure a quick snatch and grab isn’t possible. You can squeeze two full-sized handguns into the K5 or a single handgun with magazines, holsters, RDS, light, etc.

There are three ways to open the K5. First is your basic keys. Put them in, give them a twist, and the gas springs push the lid upward with some force. Your keys are really a backup option for opening the safe. 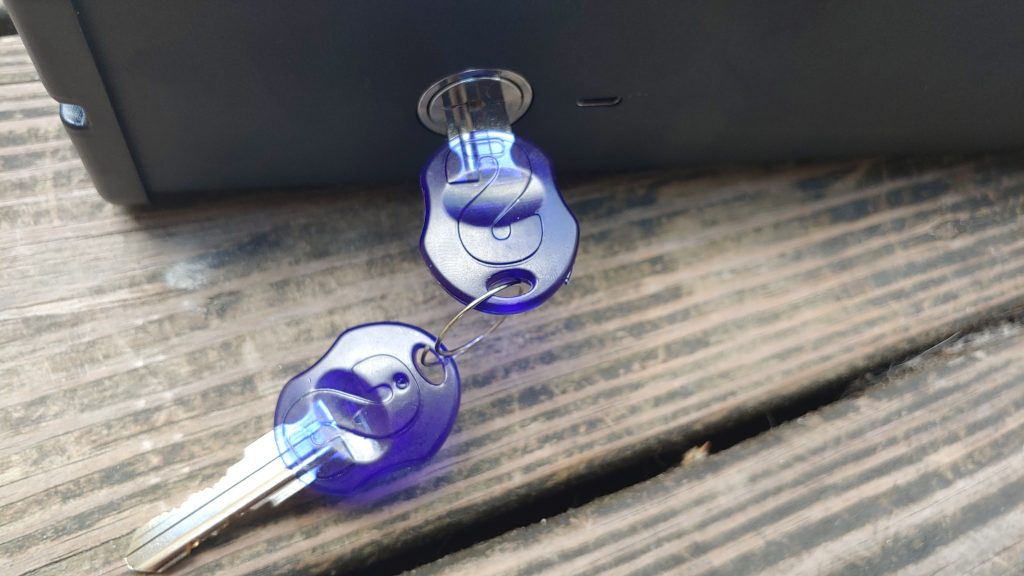 The K5’s claim to fame is biometrics, a fancy way to say it scans your fingerprint. Fingerprint safes can be tricky. I remember trying an old Barska years ago and being thoroughly unimpressed. I’m guessing the technology has made some leaps. The K5 allows you to save up to 50 fingerprints and multiple users. I scanned my five fingers numerous times at different angles to ensure an accurate scan regardless of the angle my finger approached it. 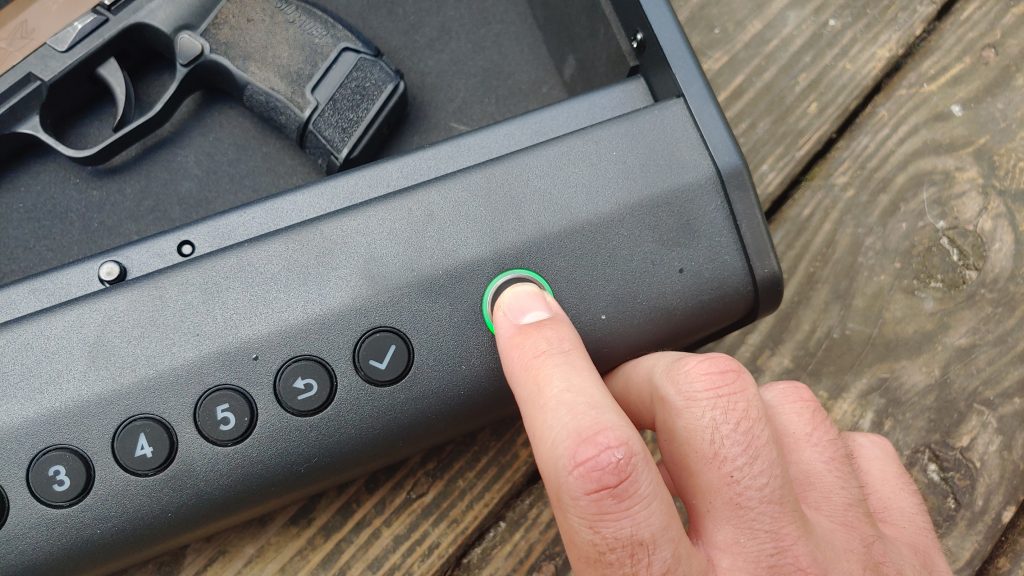 I’ve opened it hundreds of times at different angles, and it takes a lot to get an inaccurate scan. It really takes effort to mess it up. If you don’t trust biometrics or aren’t fully confident, you also need to set a six-digit password. The buttons are huge and easy to hit and press with a solid tactile feeling. Hit the six digits, hit the checkmark, and the safe opens rapidly.

Pineworld uses ten gauge steel to construct the box, and for a tiny safe like this, the ten gauge is fairly robust and durable. It’s strong enough to take a hit from a 115 grain 9mm round and not break.

Anything that uses electronics uses power, and a set of AA batteries makes this thing tick. Although there is a USB-C slot to provide power in case the batteries die or if you just prefer to plug it in. 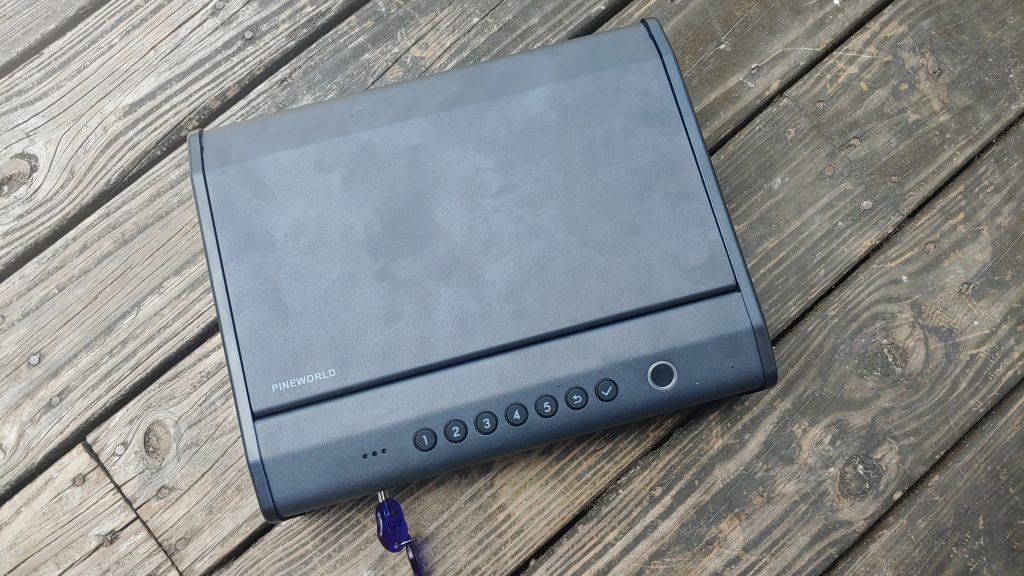 The safe makes lots of noises. When it’s open, it makes an alert. When you hit the buttons, they beep, and that might be a security concern for some. The element of surprise can also be advantageous. Luckily I dug around in the manual, and you can mute it, and the only noise is the pistons opening the door.

Speaking of noise, you also have a pry-proof alarm. I tried to slip a flat head screwdriver under the lid and pop it up, and sure enough, the thing started popping off. If you plan to test this, great, but make sure you know how to turn the alarm off. I didn’t go that far; all it takes is a successful fingerprint scan.

There is also an app via Tuya that will allow you to manage users, view the log history, and log the alarm. You’ll also get notified when someone tries to open the safe. However, it seems the alarm only works when you connect to the same WIFI the safe is connected to, so be aware of that. While neat, I don’t have much use for the app. 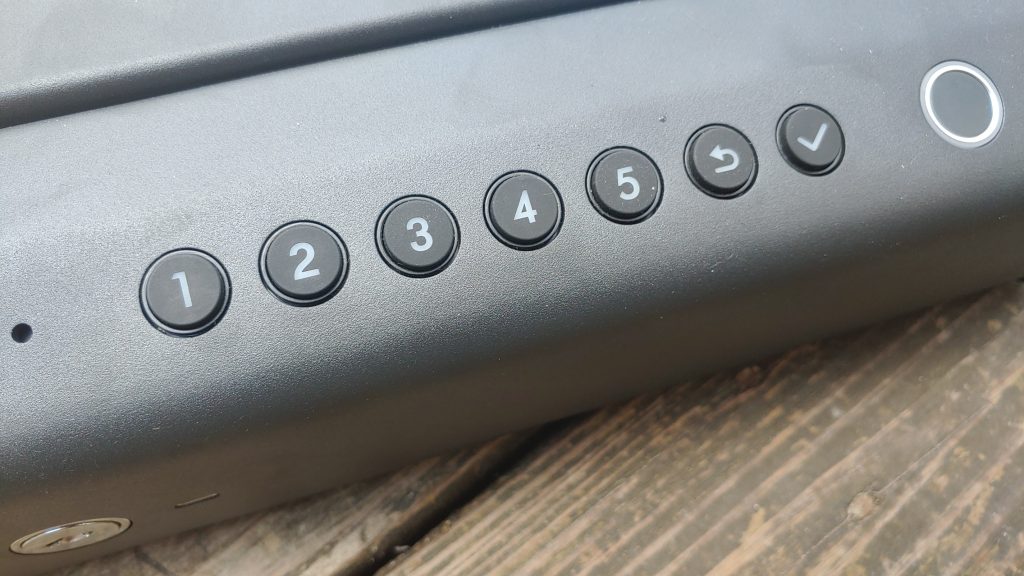 For the price, it’s a fairly robust and well-made safe. I’ve opened it hundreds of times, and my youngest kiddo still gets a kick out of the idea that my fingerprint opens it. He’s bummed his fingerprints don’t work, but that’s the way it’s gotta be.

The safe currently pulls duty at my wife’s work from home desk, and we programmed her fingerprints along with mine. This way, she has quick access to her Walther in case something goes bump in the day. She can bump back quickly but can also keep her gun secured. You can check it out here if the little K5 speaks to you.