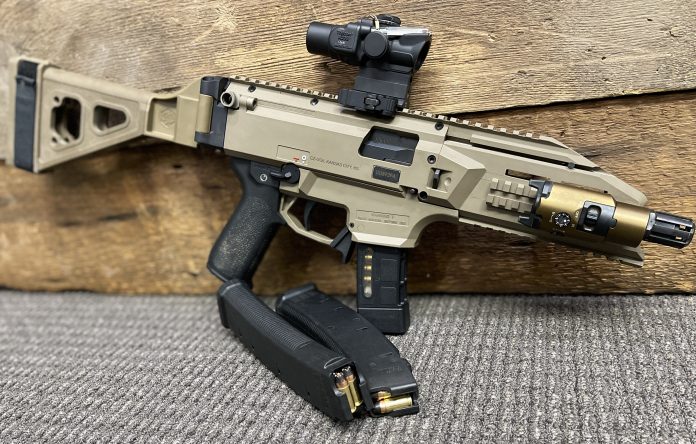 “Is a 9mm carbine a good defense gun?”

Does it meet a satisfactory minimum standard to be useful as a home defense or personal defense weapon?

And in this regard it is a resoundingly satisfactory, yes.

This does not make pistol calibers rounds an inadequate choice though. Inadequate would mean that the rounds and the platform combined do not meet the minimum standards for a home defense platform. They do. A handgun can make an adequate defense gun too, just suboptimal. There are things a carbine (or shotgun) can do better or easier than a handgun that make them better choices.

The Pistol Caliber Carbines, especially the “pistol” (legally speaking per federal definitions) and SBR varieties with barrels in the 4″ to 8″ range, occupy a ‘pretty good‘ area in the middle of selected home defense and personal defense firearms. We’ll stick with the home defense role, as the personal defense role is dominated by pistols due to the pure convenience of carrying a pistol.

So is a pistol good enough for concealed carry also ‘good enough’ as a home defense firearm?

If you carry a pistol that also carries a light, you are reasonably well set up for the home defense role. The light giving you flexibility on seeing and identifying unknowns and potential threats where interior lighting or ambient lighting may not be available or prudent. If you do something like add a larger capacity magazine and a flashlight when you are home or at night, this is also a reasonable if very involved solution.

But in this case you are still accepting each of the limitations of the handgun when you are in a situation where you don’t have to. 9x19mm in a JHP is an adequate defensive round, but not optimal. A handgun with 5+ shots inside it may be an adequate firearm, but again not optimal. Putting a light on and off at the home, or carrying with a light always on the pistol is likely to be adequate.

Personally, to avoid overhandling of loaded defensive firearms, I would use a seperate handgun entirely if it is feasible and that handgun will have a light at the minimum and a larger magazine than my carry pistol.

And while we may not want or need optimal, we can certainly benefit from better. Better than adequate.

There is one crucial item we do change when going to a pistol caliber carbine and one that we do not. We are adopting, in a generalized manner, ‘half’ of the advantages of a full rifle caliber carbine in something like 5.56.

Let’s address the item we are not getting first.

A 9mm is only going to change its performance by small margins if you lengthen the barrel and increase its velocity, but it isn’t going to put it into any new energy or performance classification. The round is still optimized to burn its powder load in 4″ of barrel, give or take. Even doubling to an 8″ or quadrupling to 16″ full carbine barrel isn’t going to level you into a untapped terminal ballistics category with pistol ammunition. For most rounds it will, at best, give you an extra 100 to 200 fps on the round, and not change its wounding profile.

Now let’s discuss what you do get.

The physics are still handgun, but the handling is all carbine.

You take the it from the one point of control, on the pistol’s grip, to the three points of control a carbine offers off of the foregrip/handguard, the pistol grip, and the stock or brace.

By improving your controlling ergonomics you improve you hit percentages, and the speed and distance with which you can deliver those hits.

By improving your hit percentages you improve the effects on target of individual shots. While we didn’t drastically change the physics of each shot, we increased how easily it is to make those shots and how many of those shots you can make if you need to.

Bringing us to point number two.

Going from 5 to 21, given a realistic range on handguns employed in the carry and home defense roles, to a 20 to 50 with an easy mode (in the mathematical sense) capacity being 30 to 35 available, platform dependent, gives you options. Rather let us say it gives you opportunities.

As a good friend often states, and I paraphrase here, “One of the rounds you have is going to get the job done. It might be the first one, before you set it off even. It might be the third one in your second magazine. But wherever that round is that does the job, you have to find it.”

So we, by going to PCC, have increased our hit percentages and our number of chances to solve the problem so far.

I’m not going to spend a tremendous amount of time on this one because the long and short of it is just about every advantageous item you can add to a carbine (optics, lights, slings) are available in good forms for a PCC. Certain PCC’s can even still benefit from running a single point, although my personal preference remains a 2-point adjustable.

Tally it all up and you get…

The PCC is alright.

You get many of the advantages of the carbine in a platform with a physics package that is adequate to the task.

You can save a little in the size and weight categories over 5.56/5.45 types. You can additionally consolidate your logistic lookout to the same ammunition as your carry gun. Whether this is a consideration for you or not is a personal question to ask and answer, but it is a point of consideration.

While ancillary choices can drastically influence the cost of a system, when you consider all aspects of the two carbines above you get most of the critical items required out of the system on the left that the system on the right provides.

The system on the right will run you about $4,000 to $5,000. It is a really nice rifle, with a premium optic and light suite, and a premium suppressor for noise indoors.

The system on the left will cost you half of that. It retains a premium optic suite with a solid light that also grants active night vision aiming, a capability the gun on the right doesn’t have.

Neither optic relies on batteries either, some folks like that capability and I lean into it myself at times. I like etched reticle systems, mostly due to astigmatism.

Pistol calibers also will be mildly less antagonistic to the ears in interior spaces thanks to lower pressures and velocities, but adding a can to the package will only push you to about 60% of the cost on the carbine and bring it far more hearing safe.

The carbines’ costs could obviously be adjusted, but they are wearing optics and lights to take advantage of available capabilities. The CZ could do 100 yards here if asked, other 9mm can too. In the home defense role a justified shot at that distance is highly unlikely, absurdly unlikely. The M4gery URG-I is set to take advantage of it’s capable range, because it can and I shoot it like that. But were I to take a shot against somebody with it, the realistic range I could justify that shot is pretty much an identical one I could with the 9mm CZ.

So, again, the PCC is alright. You are picking your physics package.