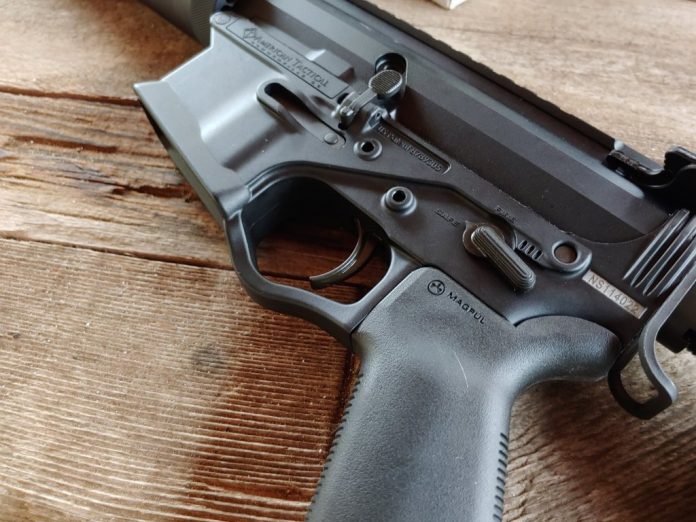 I’m far from a Luddite in terms of guns. I love new technology and love seeing companies push the bounds when it comes to using different materials, bucking the norm, or just trying something new. The Chiappa Rhino is an awesome example of what works. Is the Omni Hybrid Lower Receiver an example of what works in new tech? It’s a mostly polymer AR 15 receiver that incorporates metal reinforcements here and there to strengthen the overall design. It’s a cool, cost-saving idea and this lower is designed to be incredibly affordable. Mine cost 35 bucks. Was it worth it though?

I want to love this lower, I like the idea of being different, and polymer receivers have worked on guns like the FN SCAR. The Hybrid lower sells for as low as 26 bucks online so it’s cheap. Does the price matter if the thing doesn’t work well? Or doesn’t work at all?

This isn’t my first Omni Hybrid lower. In fact, my first lower was so out of spec the retaining plunger for the rear takedown pin would just fall out. So I contacted ATI and shipped it back. They shipped another and shipped it to my local FFL and had mentioned they would pay the transfer fee. They did not. So my 35 dollar lower now cost 55 dollars with the transfer fee and another six bucks for another background check. I could have gotten an Aero Precision lower for that money.

What about the New Omni Hybrid Lower?

I actually held onto my new lower for a good bit before actually building a rifle. I’ve begun spring cleaning and realized I had enough parts to basically build a rifle short of a few lower parts. So why not? I wanted to build a 17 HMR with a Garrow Arms Upper receiver.

Building this lower out is a little tough. The pieces do not slide easily into the polymer receiver. In fact, the trigger pin was so tight it was downright criminal. It took a little beating from a nylon hammer to get that damn thing to move. Also, tools like my pivot installation tool were difficult to use with this lower. Its far from in spec for most tools.

Other than that it is still a lower, a little deeper around the different pins, but it doesn’t affect the build.

Then I got to the rear takedown pin. The plunger that holds the pin seemed to fit. Then I gave it a slight tug, a little harder than normal. It popped right out and the plunger hit the other side of the hole. It was out of spec again. I popped it out, reinstalled it, and put the pivot pin back in. Since its a 17 HMR rifle who’s biggest enemy will be targets or squirrels. I’m not overly concerned with it. The rear takedown pin doesn’t just fall out, it requires a good pull so I’m not gonna fret too hard for a rimfire rifle.

Would I buy another Omni Hybrid Lower? Nope. Just not worth the savings. I can spend 10 more bucks and get an aluminum lower. Even the cheapest 80 percent lower would be higher on my list of choices. I like the idea, and think it can be pulled off, but it needs a little high QC before that.