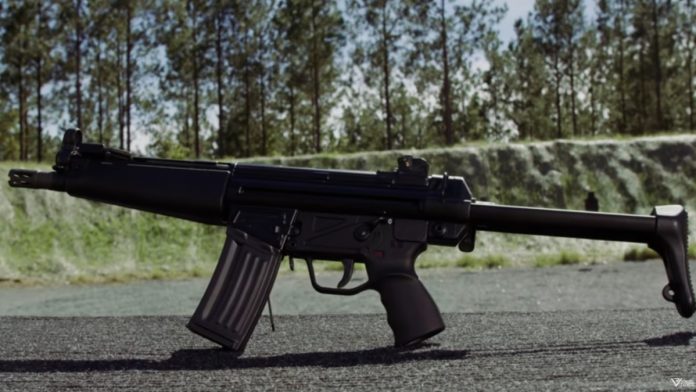 The HK53, a shorty 5.56mm carbine reduced roughly to the same size as an MP5, was a disco-era classic that never really caught on but is fun at parties. Larry Vickers, who spent a lot of time in the 80s behind HK platforms, talks about the pluses and minuses of the design in the above segment.

The Heckler & Koch HK53 was designed in the 1970s as an ultra-compact version of their 5.56mm HK33– basically the West German answer to Moscow’s AKS-74U Krinkov or Colt’s various Commando and XM177 models. They saw some minor export success, and in the U.S. the pre-9/11 Border Patrol adopted them for some tac teams back in the day. A few semi-auto HK93s were reconfigured by Vollmer, Group, and others as an HK53 in the pre-Hughes era and they run big dollars these days.

Today select-fire 53s are pretty scarce, with transferrable German-made guns running Bigfoot-rare, while Dakota Tactical and others have been making semi-auto clones for a while. As for HK, they long ago replaced the 53 with the G36 series some time ago.

And of course, should you want the scaled-up 7.62x51mm installment, there is always the fire-breathing HK51, crafted from a G3!