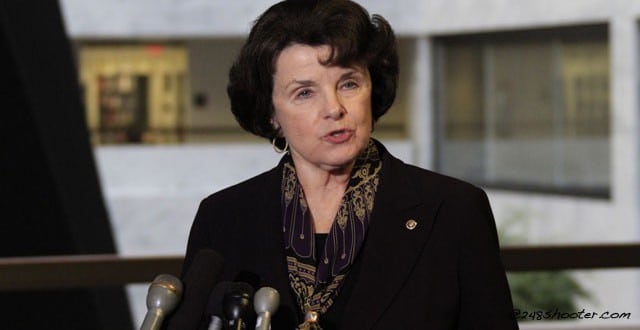 On September 16th another mass shooting happened claiming the lives of 12 people and wounded another 8 individuals. This mass shooting like almost all other mass shootings in history happened in a “Gun Free Zone”. As such victims were prohibited from defending themselves and forced to wait for the mercy of the police dept. to come save them.

It goes without saying that within minutes of this occurring Liberals across the country jumped on the bandwagon and instead of waiting for facts or grieving for the dead demanded constitutional rights be stripped from law abiding citizens in the name of safety.

Here is a quote from the Senator here:
“I mourn those killed today at the Navy Yard in Washington and send my thoughts and prayers to those families grieving the loss of loved ones.
“There are reports the killer was armed with an AR-15, a shotgun and a semiautomatic pistol when he stormed an American military installation in the nation’s capital and took at least 12 innocent lives.
“This is one more event to add to the litany of massacres that occur when a deranged person or grievance killer is able to obtain multiple weapons-including a military-style assault rifle-and kill many people in a short amount of time.
“When will enough be enough?

Interesting she has jumped all over the AR-15 and the need for tighter gun control. However a day later look and see what news has come to light.

According to an article in Click on Detroit:
What we know: Federal law enforcement sources say authorities have recovered three weapons from the scene of the mass shooting, including one — a shotgun — that investigators believe he brought in to the compound. The other two weapons — handguns — the sources say, may have been taken from guards.
What we don’t know: The sources, who have detailed knowledge of the investigation, cautioned that initial investigation information that an AR-15 rifle was used may have been incorrect. It is believed that Alexis had rented an AR-15, but returned it before Monday morning’s shootings. Authorities are still investigating precisely how many weapons Alexis had access to and when.

Lets sum up how well gun control has worked for this incident:

Could a strong foundation of laws built around our constitutional rights have protected us lets see. This was a Navy yard with trained soldiers who were not allowed to carry weapons. Had these highly trained individuals had access to even a side arm the likely hood of this lost life would be drastically lower. Yet again a Gun Free Zone has lead to a soft target for those angry and disturbed looking to cause harm in a cowardly manner.

There is no legislation that involves restrictions on gun owners that would have stopped this tragedy. However it is well documented that mass murder events stopped by a legally carrying gun owner claim less lives then those who are stopped by police. Had the Democrats in 93 not made our military bases Gun Free our trained soldiers who lost their lives yesterday may have been able to prevent this from becoming a free for all.

With no doubt a new wave of anti-gun legislation is on it way. The Liberals will certainly ignore the facts and claim that some magic bullet of legislation is the cure to a systemic issue that began with the erosion of American Citizens rights to protect themselves and an adoption of a nanny state. We urge each of you to keep an eye on this and inform us as well as other like minded individuals of the perils you face in fighting gun legislation so we may bind together collectively and stop this deadly Anti-American legislation.

UPDATE::::::
So it gets even better. They are now claiming an AR-15 was not involved in the shooting at all. Alexis had a Shotgun legally purchased in Virginia and then Illegally transported across state lines into DC and two pistols. One of those pistols at least appears to have come from the police officer he shot.