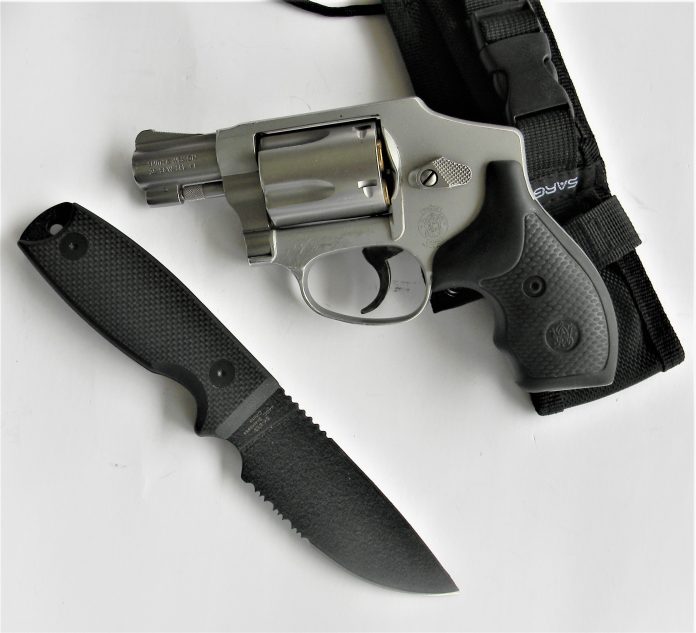 Most of us get some type of training before we carry a concealed handgun. Some of us have institutional training that is valuable for safety purposes. Many of us have the NRA basic handgun course, along with the state specific concealed carry handgun class.

Conversely the majority carrying a knife have no training, maybe something from the Boy Scouts. It is true the handgun is a specialized tool, It is used for defense. The knife is used for many more chores during the day. You don’t blast open a box or letter with a .38 spl.

Some, however, carry a purpose designed defense knife with little to no idea of how to properly deploy the tool. A half trained shooter- and that is the majority- is better trained with a firearm than most folks are with an edged weapon. Yet many think they are capable with the knife.

I am hoping to persuade you to see the reality of the knife. It is best used as a force multiplier and a less than lethal weapon, emphasis on used as in your mindset of use. Legally a knife is a knife. If you do need a knife, understand its limitations. The knife isn’t instantly effective by any means and that is a shortcoming.

If the aggressor has a knife you need to avoid contact if possible. If you are not armed with a firearm, feet don’t fail me now is a good response. It may be a good response even if superiorly armed.

Getting into a knife fight will result in both parties being cut. One may be cut fatally. It is virtually impossible to both block a knife strike and strike back at the same time. There are schools that teach the knife, if you have plenty of time, but I would strongly advise you get a good grounding in martial arts instead of trying to specialize in the knife.

The knife is an important tool a fraction of the times when the open hand or firearm are used, according to extensive research. The knife may be a good force multiplier. As I told my daughter long ago, as she was getting her green belt, if you can box you can use a knife. My uncle is in the boxing hall of fame and I grew up learning about boxing.

A person may use a large knife as a blunt striker in a non lethal manner. If the attacker is bent on assault, a quick thrust and withdraw with an open blade may change their mind. It is called showing them their blood. Hit the threat and get the arm back before he can grab it. It can have a psychological stop effect, even without causing a substantial injury. A minor injury may work where the treat of injury did not.

A boxer or martial artist with an edged weapon may show the aggressor what a rag doll looks like after a bad day even without specialized knife training. Just add the knife to the fist. As for my daughter, I felt it would be good for her to learn the knife. After weeks of work and learning she remained a novice. That is a higher level than most of the gun carriers who also carry a knife. But she knows some things.

I have worked with a good friend who has considered the knife at length. We agree the knife is the best tool for weapons retention.

More on that later.

While he stresses learning the five striking fists, the various grips of the knife, he says, are less important as it never comes up. People just don’t use the knife for defense often, or it is vastly under reported.

I answered a lot of calls and heard about the rest. Among the very few actions that actually took place that could be called a knife attack, one left me with a scar that gives my face character. I have quite a service history in a violent area of the country. Not just my opinion, the FBI and state stats say so.

When I first became a peace officer, we had a better class of bad men. They would take a ball bat and cap the knee of a fellow who didn’t pay his gambling bill. Today it is AKs and dopers. The UZI fell out of favor some time ago. Knives are used by women for the most part to take out a particularly bad actor, although I have seen a cast iron frying pan used to permanently end the career of an abuser. If the attacker is using the open hand, and is larger and more skilled, the knife may be an answer.

A knife fight with both individuals armed with an edged weapon is rare. Two men in close quarters with knives is simple butchery. It is almost impossible to block a knife thrust with the open hand. If you have time to quickly doff your covering garment and wrap it around your arm you may have time to run! Not that this is really going to stop a big blade, a chopper.

A fixed blade knife is much more effective than a folding knife. The reach, stability, and durability are superior. Few of us carry a fixed blade. In some jurisdictions there are restrictions on fixed blade carry. A knife may be dangerous and lethal, but effective use is limited. In most cases a blunt action instrument is more immediately effective. A blackjack or a sap solved a lot of problems without permanent effect. Again, minor injury causing desired effect.

As for myself, I was trained on the PR 24 baton. In an age when we were expected to subdue violent individuals without the use of gas or tasers, the PR 24 was among the greatest instruments I ever had the honor to be trained on extensively.

The big stick would be effective against edged tools, as an individual armed with hedge trimmers once learned. The trimmers were a weapon of opportunity, and a lethal one. While I do not subscribe to spending a lot of time in training to use the knife, the utmost respect for an edged weapon at close range must be maintained. As an example an attacker may quickly close distance and cut you before you may draw your sidearm. How fast is that 9mm carried under your shirt in a tuckable holster? A couple of seconds to draw on a good day? That is a lifetime when a fellow the size of a tree is coming at you with a Pakistani made folder with a four inch blade. That isn’t the time to draw the Benchmade, but to get off the X, move to a better position, and shoot. Knives are lethal.

If you use the knife everyday in opening packages or boxes at work you may have a deft handling engrained in muscle. You need to learn to quickly deploy the knife if you carry a knife for defense, just like drawing a pistol. More than one tough guy has drawn his knife and dropped it. (Guns too.)

Learn to quickly apply the proper grip and thumb the knife open. Few, if any, knives allow simply twisting the wrist to open the knife. This movement may be used along with the thumb motion in opening the knife. Some knives have a section on the blade, such as the Emerson Wave, that makes for rapid opening if jammed against the pocket or belt. If you carry a knife you must put some time into training, don’t get me wrong, but there is only so much training time. Learning to draw the firearm and get a sure hit is most important, as an example. Learning the speed load is much less important. Training time is precious and must be rationed.

If the knife is your primary tool you should learn the different grips used to hold the knife. Choosing a knife with a good balance of abrasion and adhesion in the handle and a bit of jimping on the top of the blade is important. Smooth is classy and nice looking, but not something you need in a personal defense knife and blade combination.

Blade material is important in a long term camp knife. In a personal defense knife thick and sharp is important.

The first grip is the forward or cave man grip. The knife is held with the point jutting out between the thumb and forefinger.

The Saber grip is probably the best overall grip for most of us to learn quickly. In this grip the knife is more forward in a natural grip than the forward grip and the thumb is against the top of the blade. This allows greater leverage in a stabbing movement.

The reverse or icepick type grip is controversial. If you see an opponent using the reverse grip maybe they know what they are about and maybe they have seen some cool photos on the web.

The reverse grip is used with the handle firmly in place and the blade jutting out the bottom of the hand edge forward. This is a great slashing grip. The reverse grip could potentially deliver a deadly slash if the knife were used in an uppercut type blow. If the assailant has his arms around you the reverse grip may also be used as a hammer grip. In this way it is versatile. However there are drawbacks to the reverse grip. One is that a trained martial artist, or someone strong enough and lucky, may come from above with sufficient leverage and strength to drive the knife back into the user’s body. Then there is the draw and orientation. With a fixed blade knife drawing into the reverse grip is simple enough. The folder takes some delicate maneuver to move it into the reverse grip.

Most gun grabs are rearward originating in the case of uniformed officers and soldiers. Folks may not have a clearly defined reason for the attack other than to obtain control of a firearm. This gun grab tactic has been observed being practiced in prison grounds even, criminals can drill too.

The one hand goes to the gun and the other goes around the victims neck. If done properly the victim’s feet may be brought up if not off the ground to the heels. This is a very difficult type of assault to defend against. If the attacker has a firm grip on the neck the victim may soon lose consciousness.

You must move quickly. While there are other techniques such as the Lindell method, the use of an edge weapon to counter a gun grab is I believe the best answer. This drill evens the odds against a large powerful aggressor. When the gun grab attack occurs, the right hand goes to the gun grabber’s hand and traps it on the gun. The left hand (reverse the drill for a left handed shooter) draws the knife and slashes across the assailants forearm. It doesn’t take much blade length to open the arm up. Since grabbing your gun is a lethal attack, you respond with a high level of defense. If the gun grab is centered on the gun and the assailants other arm is also on the gun or around the waist modify the drill, perhaps striking the hand on the gun as you pivot to take the gun grabber off balance. This is a relatively simple drill that involves learning to draw the knife and apply the blade quickly. It doesn’t take a great deal of dexterity to strike a stationary arm about the victim’s body.

There, thoughts on knives.