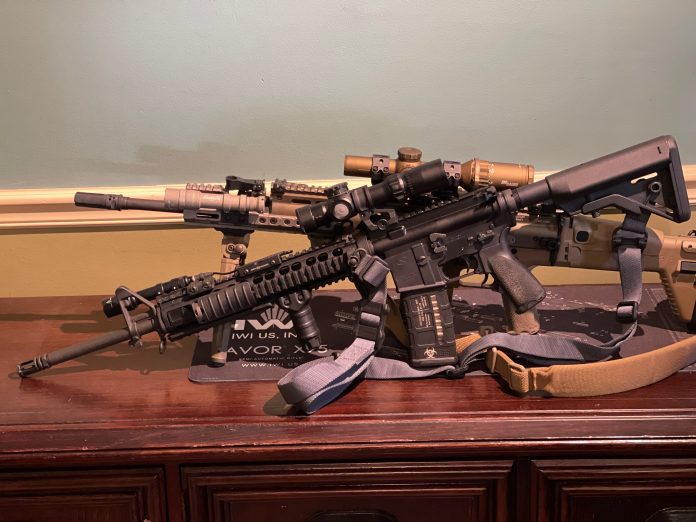 In recent weeks I’ve seen the ebb and flow of the gunternet coalescing around some old AR arguments again.

These are old. They are tired. They have been answered.

The things you need out of an AR, and by extension any rifle you’re relying upon, are a good barrel, bolt, recoil spring, and gas system that work together. That’s pretty much it. You can thrown in proper dimensions and finishing in the receiver so that fire control and magazine work reliably and the receivers surfaces stand up, but that covers it. You need the parts to work together.

Those are all ‘quality of life’ improvements. They grant greater utility instead of base function. Think of it like adding an adapter to your computer that allows you to plug in USB and USB-C compatible gadgets. Sure the computer can now talk with your gizmos and that adds functions, but the processor speed and onboard memory aren’t changed.

So when people are asking me my favorite AR, it still inevitably comes back to the M16.

Specifically my “A5-I” variant, but the core change between mine and an A4 is very simple…

In my moderately well informed opinion, the M16 needed an adjustable stock, and that was pretty much it. I’m annoyed that the military continues to be behind on proper 2-point adjustable slings too, but that isn’t just for M16’s. They’re getting there.

Have we determined the M4 (and by extension, other carbines in the 11.5-14.5 barrel length range) work well? Yes we have. But the thing that made the accurate, soft recoiling, and hard hitting 20″ gun unwieldy wasn’t the barrel. It was the stock designed for a 5’11” Marine, slick (no armor), and firing prone with iron sights in a traditional marksmanship position. Not moving and shooting from upright, where shorter LOP’s work wonders.

Combat marksmanship developed as a discipline away from traditional marksmanship, building upon those lessons but taking into account the fact that troops would always be building an unconventional off-hand shooting position and needing to deliver accurate repeatable shots, not one shot on a semi-reactive target that would tell you if you hit it or not (Known Distance Army and USMC ranges) and wait to score.

So, in addition to once again loving my old musket for the great things it does well, what I am getting at is…

Do the core components of your rifle work well?

Good. Does your optic cover your core purpose for the rifle?

Yep? Alright, 2 for 2. Now, if its a defense gun especially, do you have a decent light on it?

Yes? Excellent, got the Turkey!

If your rifle is a 16″ or 20″ barreled quality old warhorse, rocking a front sight gas block, an A2 flash hider, and a Magpul MOE handguard, don’t worry. The question isn’t whether you should be running a 13.9 Hodge barrel, with a permanent Deadair KeyMo muzzle instead. That answer is no. You shouldn’t be. Your next rifle can be, but don’t throw the baby out with the bathwater thinking you need to replace your rifle.

Supplement? Sure. Improve on with the next build/buy? Certainly. But not need to replace.

The military concept of ‘turnover in place’ applies. Military units always (where possible) turn over a region’s responsibilities to the next unit gradually. When the oncoming unit is ready to assume the responsibility for the role, only then is the original stood down.

Applying the same logic to the rifle, you should not cannibalize the in place rifle to ready the new one. The rifle that is ready should remain ready until the new rifle is fully ready. Make sense? Have two working and complete systems before you relieve the older system.

Don’t be in a hurry to retire what works to get the new hotness working, I know it’s tempting. I’ve done it. It was dumb then and it is dumb now.

So look at those old reliable rifles and give them their due.