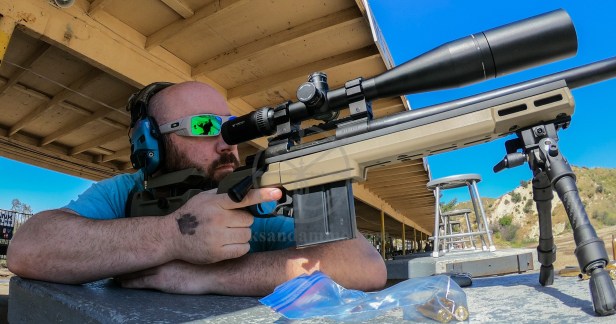 The specs and features are as follows –

The base options for the bipod come with a choice of legs in various lengths to include 10”-14″, 8″-11″ or 7”-10”. The height of the bipod is based on an average rifle, from ground level to the center of the bore.

I went with the 7”-10” leg option (322.99$) for use at the range on normal shooting benches. I have it mated to a KRG Bravo chassis rifle chambered in 6.5 Creedmoor. The 7” height has worked perfectly on seated shooting benches with a small shot filled rear bag to adjust elevation. The weight of the Evolution Bipod in this configuration is approximately 13 oz.

There are several options for longer lengths of legs that extend to 29 inches for about $100-$127, if you want to use the bipod to sit in a stand. Additionally, the legs will attach to each other, which is a neat feature (see below). This means if you have a 10-14in leg and an 8-11in leg you can put them together for an 18 – 25in leg. Kind of nice if you want to have several of the shorter length legs that you would use more frequently, but you still get more height out of the bipod when you need it.

Two legs attached to each other to make a longer leg.

With that said, my preference would be to get the tripod adapter or trekking pole adapter if you’re getting anything longer than the 10-14 inch high legs. Both are around 49.99$ and both, to me, are significantly more versatile than the 22-29 inch legs. I also feel that, at that length, you will benefit from a more robust platform (like a tripod) for a steadier hold. The trekking pole adapter is great for long hunts when you will already be utilizing the poles. Gear that does double duty so you can leave something behind to save weight and pack room is always a bonus and appreciated on long hikes.

“The Trekking pole adapters work with any trekking pole that has the 1/4″-20TPI stud on the top of the pole for camera/gopro attachment. There are two adapters in this kit. You will need a pair of trekking poles with studs to work as a standing length bipod.”

“It takes just a few seconds to convert from a two-legged bi-pod to a tripod mounted shooting support with the “Tripped Out”! This tethered pin locks the bipod pivot into the adapter so the rifle will be attached to the tripod. But can be quickly and easily released by pulling the pin and reinstalling the legs.”

Photo of the base of the Bipod with legs removed. All other accessories utilize this base unit and are very quick to change and are plug and play.

The legs themselves are adjustable to 0, 45, 90, and 125 degrees. There is a button on the side that, when pushed in, allows the legs to rotate. The joints are machined very well with no burrs or hang-ups and the legs rotate very smoothly when deploying and the Bipod. It feels like a well put together piece of equipment. Once the legs are deployed and are locked down, the whole bipod is rock solid. There is no wiggle room at all – tight tolerances and great machining. Pair the bipod with a rail mount that’s bolted tight to the rifle chassis and this is an extremely solid setup that won’t wiggle around on you.

Close up of the 4 lock positions for the bipod legs. Lock up is solid with great machine work on the parts.

To make the bipod more solid when deployed. it is built with non-rotational legs so you do not have to worry about it walking on you. If you are the kind of shooter who pushes the rifle forward into the bipod, one leg won’t spin and take you off target. It is a great feature and one I appreciate.

The latch that allows removal of the bipod from the rail has a lock on it. In order to use the latch you have to depress the “safety” shown below, once that’s depressed you can then open the latch.

This is a great feature that will stop you from inadvertently catching the latch on clothing, a sling or even a branch when hunting. I am very happy to see a lock like this and it shows how well thought out this whole system is. Every small detail was thought through and solutions were integrated into the bipod.

The handle for the swivel lock that allows the bipod to swivel the rifle right or left is also well thought out. If you pull the lever straight back you can turn it without engaging the swivel lock itself. This allows you to move the handle out of the way if you’re trying to rest the bipod on a railing or branch. Another great feature and a well thought out solution.

This is a solid bipod that has all the features that I was looking for. The legs lock in very tight and the whole system is rock steady with no play in the joints. The options are great, from tripod mounts to trekking pole mounts this bipod fills many roles and can become a go-to piece of equipment for everything from hunting to precision shooting. Although the price is higher than some entry-level bipods on the market, it is on par with other high-end bipods that do not have as many features. The Evolution Bipod is worth every penny.

Scott Peeler has been shooting for over 15 years, jumping head first into the weekend competition world only recently. Due to his OCD tendencies, he can’t leave anything alone, is constantly tweaking gear and equipment and is always on a quest for that perfect hand load. In his spare time, he reviews equipment for his blog HooksandAmmo.com