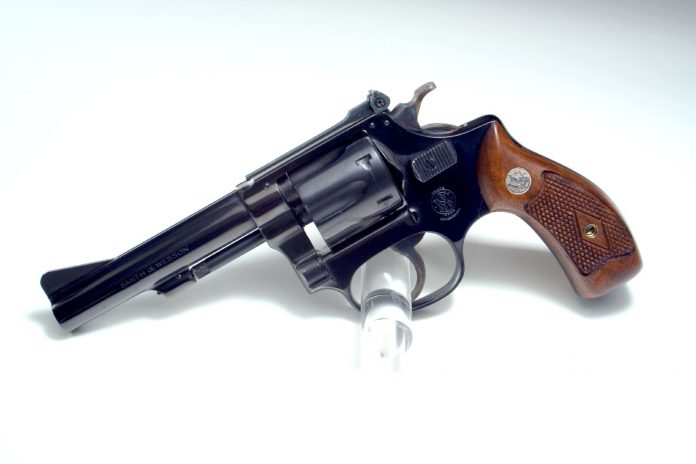 Some of you will probably read the title of this and think “what the hell is a kit gun?” Which is a fair question, because kit guns were popular in a day where the idea of throwing a revolver in your tackle box or camping gear was completely normal. These days everyone is carrying a Glock 19 with an RMR and a WML, so that got me wondering if the idea of a modern-day kit gun was even valid?

What the hell is a kit gun?
This is probably the first question to answer, because understanding the idea of a kit gun is important to creating a modernized version. In days of yore, the kit gun was a revolver, frequently a 22 LR that was tossed into hunting, backpacking, camping, or fishing “kit” and used for everything from small game gun, casual plinking, dispatching wounded animals, and even last-ditch self-defense. The idea was simple: a smallish, lightweight gun that was a jack of all trades but master of none. One might even question whether or not we need to modernize the idea of the kit gun at all, because Smith & Wesson still makes the Model 317 Kit Gun, and Ruger makes the 3 inch LCRx in 22 LR. Both of those guns are lightweight 22 LR revolvers that perfectly fit into the ideal of what a kit gun should be. And as a diehard revolver enthusiast, I should probably call this article done and say that we did it, we modernized the kit gun because one is an Airweight and the other is polymer, mission accomplished. But what if…we took it a little further?

What if we made it semi-auto?

Alright, so the idea of a semi-auto kit gun is appealing. More ammo and easier to shoot are always good things, even if semi-automatic 22 LR pistols tend to be slightly less reliable than rimfire revolvers. Of course, that’s usually because people feed their guns the cheapest ammo they can find, but that’s a different post (buy CCI and you’ll be fine). Let’s grab 5 options to make our list. Remember, they need to be 1) light, 2) small enough to fit in a box, and 3) reliable.

The gold standard of 22 LR pistols, in a lightweight package with a 4-inch barrel. Put a red dot on it, modify it endlessly, it’s the king of the hill.

The entry on this list tha wins the “Who’s on First” award (google it, kids) is the confusingly named Glock 44 which is actually a 22. It really ticks the boxes on this list, starting with its 10-round capacity. But the real advantage of the Glock 44 is that it’s a Glock, and at this point basically everyone has shot a Glock, so it’s nearly universally familiar to everyone.

I shot this relatively new Taurus a bunch and let me tell you: it runs great. Not only does it run great, it can hold up to 16(!) rounds depending on the model, and even accepts certain red dot sights. Oh and it has a threaded barrel so you can suppress it, and I’m sorry if you don’t think all of that is cool, you’re reading the wrong website.

Oh yes, first on our list is possible the greatest 22 LR kit gun option there is. The Bobcat is light enough to carry in a pocket, extremely reliable thanks to its open slide design, easy to load and unload, and is even easily suppressed thanks to the recent introduction of threaded barrel models. The only drawback to the Bobcat is that it holds 7+1 rounds, the same capacity as one of the revolvers.

This gun doesn’t get the love it deserves, I think partly because S&W hasn’t done a great job marketing it. Regardless, I remember when it was launched, and using it to snap-shot prairie dogs from the passenger seat of a UTV driving around Wyoming. It’s a great little gun with a good trigger, reliable action, and the ability to be suppressed.

You can’t really go wrong with any of the five modern kit guns on our list, however it’s also important to note that for true modernity, only 2 of them can readily accept an optic from the factory. Since it is 2021 (or whenever you’re reading this), optics are on everything, so if that’s an important criterion it narrows your list to the TX22 Competition and the 22/45 Lite. Now, if it were me, what would I pick? The 2 inch Ruger LCRx in 22 LR, of course. But I’m a degenerate revolver enthusiast.