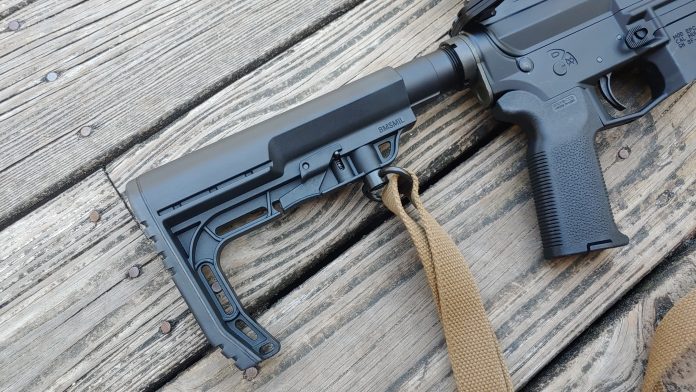 I’ve never cloned a rifle, but I enjoy the cloning community. I follow several pages across different social media outlets and enjoy seeing and learning about military rifles, especially those in use by various special units. I bring all this up because cloners are interesting folks. I once saw one of America’s elite and his rifle being made fun of because of his stock. It was a Mission First Tactical Battlelink Minimalist Stock.

As this overweight neckbeard made fun of a special ops troop for his stock, I wondered what the problem was with the stock. I had never used one, but I stumbled across this same or similar remarks across the internet. People often remark on the stock but seemingly never provide a reason. Reviews across the board seem good, so when I stumbled across one, I figured, why not check it out and see what the internet hate is about?

What first took me by surprise was how freaking light this thing is. I’m used to my SOPMOD B5 and Magpul SL stocks. This thing weighs nothing in comparison. It’s 5.8 ounces, according to the internet. If you are going for a lightweight build, then the MFT Battlelink seems like an awesome option.

It’s a whole lot lighter than most stocks and a lot lighter than any of the PDW stocks I’ve ever used. I own an Aero Precision EPC, and as a PCC, it’s got a heavy buffer, which makes it a bit rear-heavy. I keep a Magpul SL on it normally and swapping it for the MFT Battlelink resulted in a bit more balanced rifle. 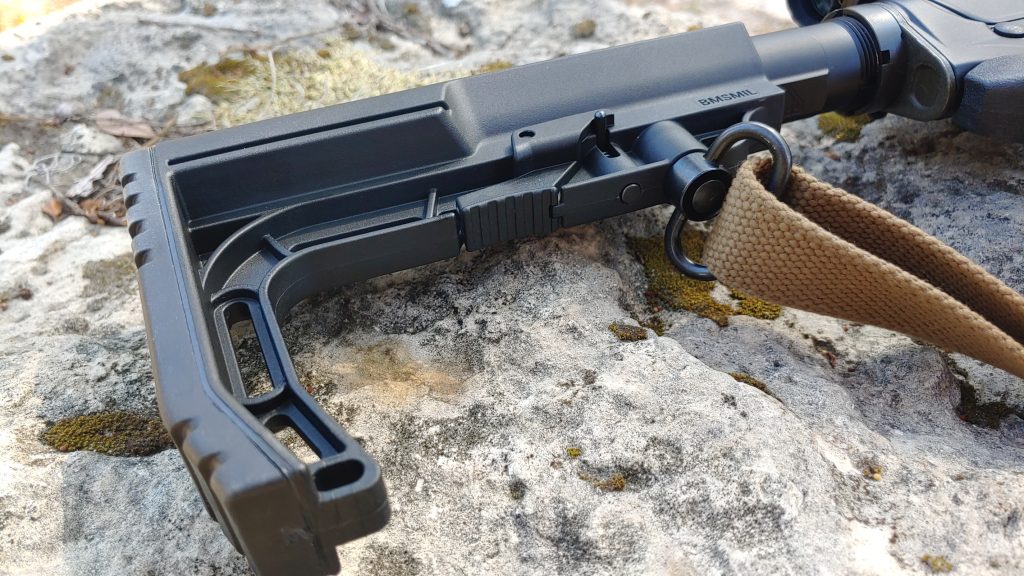 The lock-up from the stock to the tube is tight, very tight, and wobble-free. However, there are no issues manipulating or deploying the stock. It surprised me how tight and nice the lock-up was for a fairly budget-friendly stock.

We get numerous sling mounts, including a QD port on the bottom of the stock that is fixed and non-rotating. There are areas to attach a web attachment as well. I used the QD port exclusively and had no issues. The stock forms a hook-like shape that people say gets caught on stuff.

I guess it could happen, but it seems rare. If this was a major concern, I’ve seen guys braid 550 cord from one part to another to form an A frame-type design. Heck, MFT started selling braided cord for just that reason. 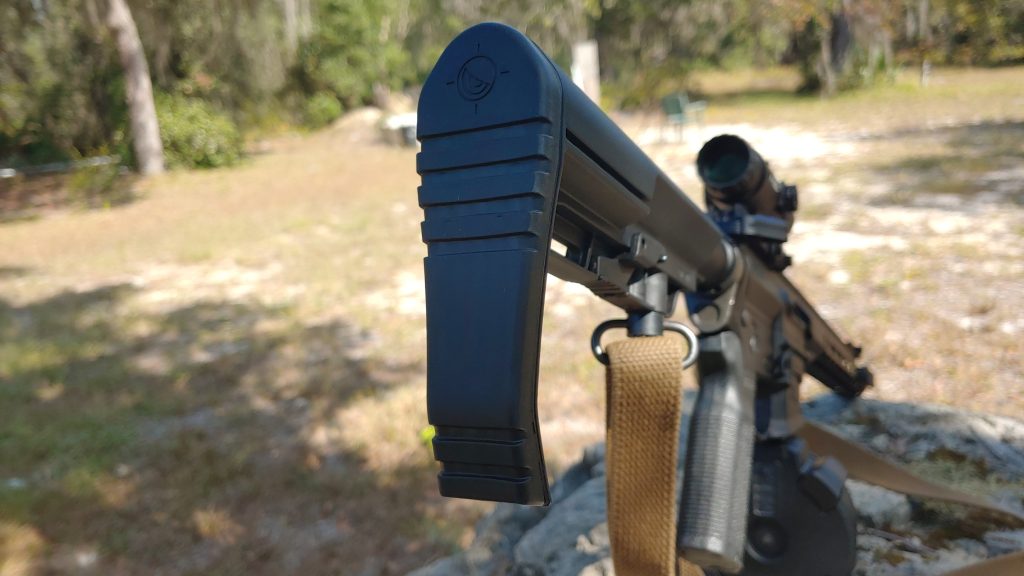 With the stock attached, a pocket full of hope, and a range bag full of 9mm, I hit the range. With the stock adjusted just right for me, I started launching lead and shooting various drills. The cheek weld is surprisingly okay. It’s not as good as the Magpul SL, but it provides more than enough. It’s more and better than your standard M4 stock.

The stock advertises itself as minimalist, and that’s true, but the shoulder pad isn’t. It’s fairly wide and makes great contact with the shoulder. It’s as wide as some of the larger stocks on the market. A decent cheek weld and good shoulder contact are nice. I used my angled foregrip to pull it in tight. 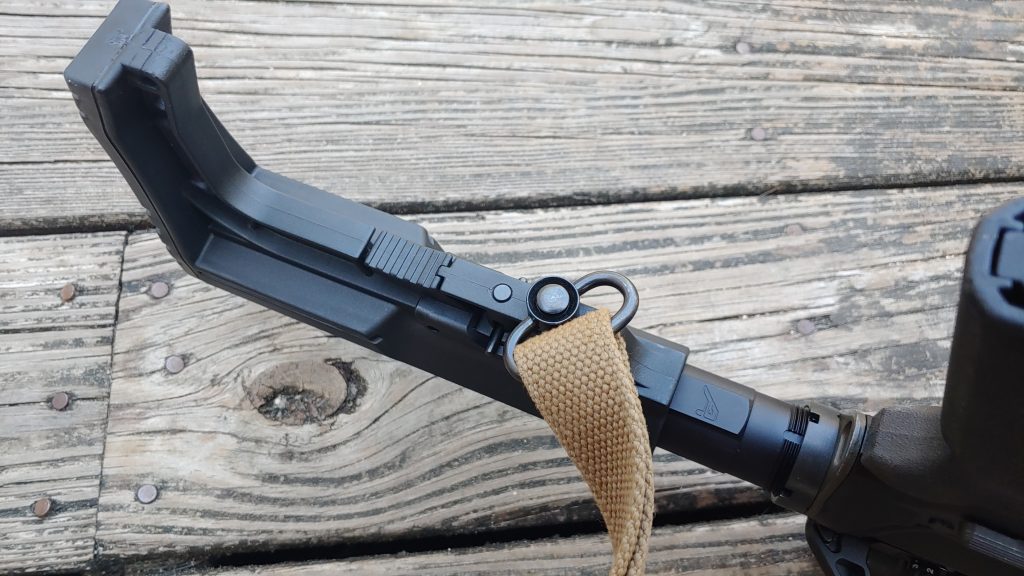 I didn’t get single beard hair pulled out either, and that’s always a plus. In firing, I found no flaws. In donning, moving, and removing the sling, I never had issues with the sling catching on the stock and disabling it in one way or another.

The stock has an aggressive rolled toe that is nice as you go from low to ready. It rolls up nicely and catches your shoulder. The toe also makes it nice and easy to transition from shoulder to shoulder as well.

The MFT Battlelink stock locks in nice and tight and soaks up recoil nicely. It also doesn’t slip and slide off your shoulder and feels quite nice. I’ve only had a few days and a few hundred reps, both dry and live, but I don’t get the hate.

Is the MFT Battlelink God’s gift to stocks? Maybe not, but for a minimalist rig, it’s quite nice, and for a budget-friendly rig, it’s also quite nice. It’s super light but stable and comfortable. It doesn’t offer the same support as other, bigger stocks, but it offers a surprising amount for such a minimalist rig. 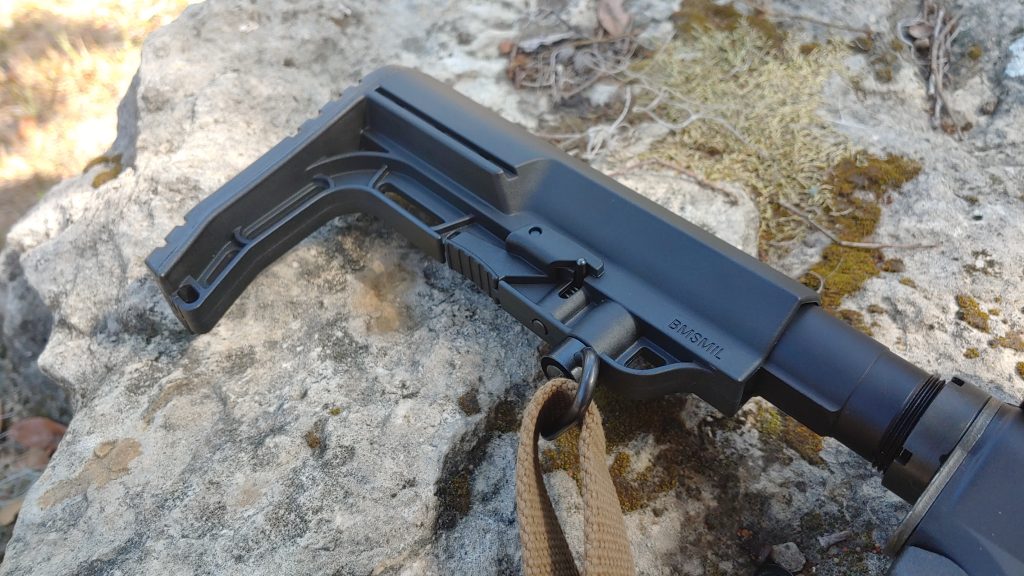 I think the hate comes from the fact it’s often shoved on bad rifles. These stocks are fairly common on super-budget rifles, and that might have gotten them a bad reputation. I love shotguns, but the shotgun community doesn’t give shotguns a good name. I think the same thing happened with the MFT Battlelink stock.

All in all, it’s a fairly well-made stock that’s ultra-light. I don’t get the hate, and I think it’s a great piece of gear. Maybe I’m wrong, but maybe the internet gives things bad reputations for no reason at all. It’s certainly not the Olight of stocks.