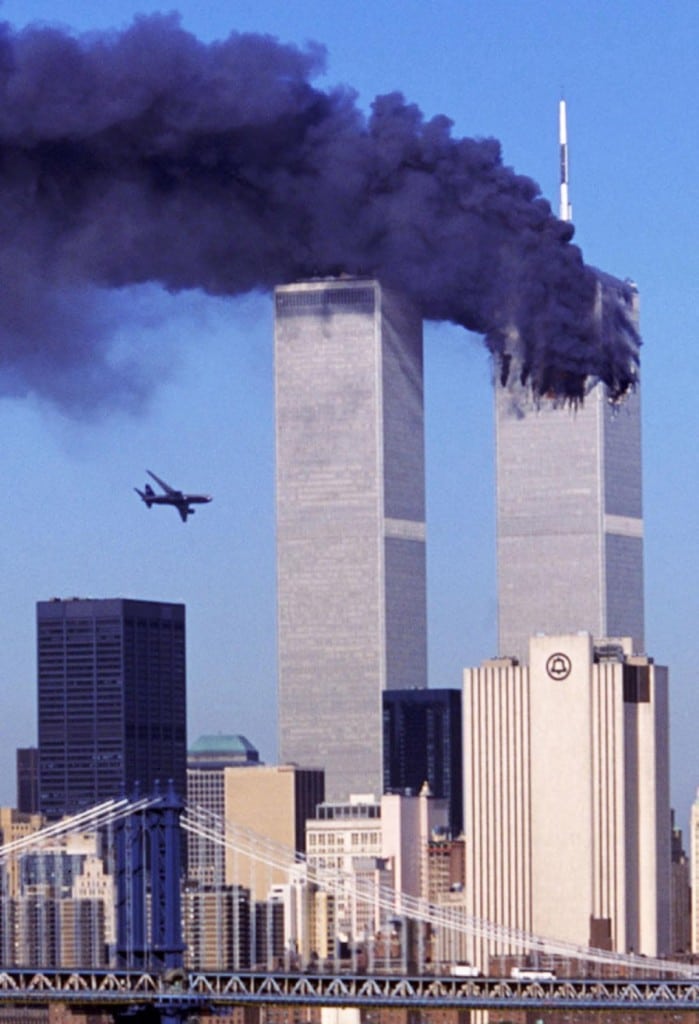 There seems to be this strange common thought going around these days, something that leads people to believe that if we ignore the bad guys, they will simply go away. If we pretend that the GLOBAL war on terror is over, then in somehow will be. Armed with this delusion, we can continue to go to cafes and coffee shops and not get blown up, drive down the street and not get shot, take our children to school and not have to return to identify their bodies. The world is full of tragedy and pain, so it makes sense that we wish to turn a blind eye to the ugly and concentrate on the good.

This does not, nor has it ever, kept the wolves at bay.

There are those who think that because we have enjoyed 13 years without another 9/11 type attack (on our own soil) that this must mean the war on terror is over. Because we left Iraq, and are “wrapping things up” in Afghanistan, the problem is fading away. Here is the thing about that…

We did not expect 2,996 of our citizens to lose their life that day. We didn’t ask to have over 6,000 people seriously injured. We, as a nation did not know how to manage the feelings of terror and loss felt by all. The worst surprise attack on our nation in its history, and the first since Pearl Harbor. Only it wasn’t the military that was targeted. It was our citizens, our innocents, our people just trying to live their lives. This attack was aimed at YOU, not our uniformed pipe-hitters. This attack was designed to scare YOU, not the government. It was meant to strike fear and terror in YOUR heart. You, the imperialist bastard that you are. Your family, the great sinful, gluttonous devils that they are, your infidel, non-believing children. The attack was on America as a whole, the target was YOU.

Apologists and the weak minded have often tried to justify this and other unforgivable action by looking at them through the lens of America’s history of foreign policy, as though our actions abroad somehow merit such a response. some go so far out as to call 9/11 as an “inside job”.

Yes, an “Inside Job”. Perpetrated by people that can’t even balance a budget, avoid a recession, keep the infrastructure squared away or pay their servicemen on time. These are people who blame the government for unending incompetence but still give it credit it for being somehow capable of the wholesale murder of its citizens. Wait, what?

This is a thought that is sickening on so many levels. It is also nearly impossible in the context of reality. Regardless, there are those that wish to explain it away by blaming the government, the military, the federal services, the illuminati or the flying spaghetti monster. For over a decade now we’ve heard this nonsense. As if the idea that there are people that simply hate us for our way of life is somehow inconceivable. As if the thought that a group of people exists hate us so much they are willing start a war is less believable than the slaughter of American citizens by the American government on the orders of the President, the Pentavirate or Hedorah-worshipping NEOCON warmongers.

Unfortunately for those misguided people, a long and undeniable history of hate proves just how wrong and out of touch with reality they are. Kill them all – break all their shit.

Without the War, there would have been many more attacks on US soil this past decade. If we had simply taken it on the chin and took a weak handed approach, how would that have turned out? What message would that have sent to ALL of our enemies? America would be forever viewed as a nation that has become a paper tiger, unwilling and unable to bring justice when her citizens are murdered. A nation that cowardly rattles its saber, which has long rusted away inside its sheath. That’s not who we are, and for as long as we call ourselves Americans, we must fight evil when it threatens us. That’s exactly what we are doing, but to what extent are we really doing it anymore? For the last few weeks, we here at Breach-Bang-Clear have been receiving mixed reports and hints from various sources; this could mean a lot or nothing, even taken in totality, but it’s more than enough to make us uneasy. These include alleged Homeland Security memos circulating instructing law enforcement agencies to increase their vigilance, friends in response positions with large metropolitan areas who tacitly warn they’re expecting some sort of attack this year. One such memo (you’ve probably read articles to this effect already) says there might be AQ/ ISIS actors as close as the Mexican border. Border Patrol agents we know personally have assured us that this would be something less than a surprise, since often such information is held back from the guys on the line because of how fast it would be leaked to the public.

We spoke to several veterans now employed as power workers. They told us that an attack on the grid is something they have been instructed to watch for, several times. A few cryptic messages from friends on active duty allude to something ominous and a general increase in readiness. The long and short of it is, no one knows whats up, and those that truly do aren’t sharing. Why? Because as the last few years (and the internet) have proven, a briefing, an email, a memo, a powerpoint, a single document or even a careless comment spreads like wildfire. This is interpreted as “fear mongering” when (thankfully) nothing happens. Sometimes its because the concern was unwarranted, other times because the right people got to the scene and put the fire out before it caught.

Keep in mind we generally don’t hear about the successes, which isn’t necessarily a Bad Thing. It is not fear mongering to recognize that two years ago we lost a serving United States Ambassador and three other Americans. September 11, 2012, wasn’t a coincidental date. It was a planned attack by Islamic militants that seized the American diplomatic compound in Benghazi. We lost our citizens, sensitive information and a lot of face. It also undoubtedly set the tone for the next two years of America’s world affairs.

A year later, we saw Islamic terrorists conduct another coordinated, planned attack in Africa. On September 21st 2013, Al-Shabaab backed gunmen killed more than 67 people in the Westgate shopping mall in Nairobi, Kenya. That mall is a modern shopping establishment heavily influenced by western equivalents. Once again organized Islamic terror struck on the world stage, killing women and children. We will skip over the debacle we find ourselves currently involved in, regarding Syria, Ukraine and our withering relationship with the Russians. The Russians have their own agenda, but they also have their own problem with Islamic fueled terror (remember, it was just recently the ten year anniversary of the mass murder in Beslan).

Parts of Iraq have turned (back?) into a training ground for new jihadists, and a killing field for those who oppose ISIS. Most if not all of you have seen the videos of Americans brutally murdered, along with untold numbers of Iraqi civilians. ISIS stands for the Islamic State of Iraq and the Shām (which is how they refer to the Levant in the context of global jihad). It’s a grass root start up of Islamic terror and it has some old vets in its ranks. The al-Qaeda linked group is responsible for torture, atrocities and thousands of deaths in the Syrian civil war, with more daily in Iraq. They wish to build a new “country” composed of Iraq, Syria and surrounding Middle Eastern countries, all for the Sunni Muslims. The name ISIL is now being used by the US State Department as well as the United Nations, since the group wants to extend that influence even further.

How much further? Until every infidel is dead. Hey guess what? You’re an infidel.

“The threat is two-fold because ISIS is in war with core Al Qaeda. ISIS was kicked out of Al Qaeda in February and they’ve been fighting each other internally for leadership. ISIS is winning right now. They have captured the imagination of young Muslims from around the world and depriving Al Qaeda of its own fighters. Al Qaeda is split down the middle and now you have 9/11 [anniversary approaching]. It would be beneficial to both camps that on 9/11, some great attack in the United States takes place. It’s certainly a serious consideration because they are both vying for primacy.”

Great. Now we have a game of oneupmanship pending with the two most dangerous terror groups in the whole world. ISIS is generating a lot of funds right now, which is probably another factor that could have the AQ angry at them. But wait, there’s more! Islamist militias in Libya took control of nearly a dozen commercial jetliners this past month, and suddenly a collection of western intelligence agencies seem concerned about the planes being used for an attack.

This isn’t fear mongering and it certainly isn’t aluminum-foil hat wearing drivel. This is the state of the world we currently live in. Are there terrorists in Mexico?

There sure as hell are plenty of violent cartels moving free down there, so why not? The cartels don’t care who you are, as long as you have money, and they themselves have demonstrated a ruthless capacity for savagery on par with what the jihadis do. Are there cells going active here in the states? Why should that be beyond belief? Those same Mexican cartels move freely in our own country, why not some jihadists? What’s going on with those Libyan (and other missing) airplanes? Is that something we shouldn’t sweat? We haven’t had any soldiers get their heads cut off publicly like what happened in London so that must mean everything is all right, right? This war isn’t over, regardless of how Afghanistan ends. Afghanistan is just one country. This is a Global war. We cannot reason, wish or hope this war away. We are fighting a determined, ruthless, and well financed enemy that doesn’t wear a uniform, doesn’t follow the Geneva convention and could care less about collateral damage. In point of fact, collateral damage is their very goal. This September 11th, 2014 we will remember our citizens who were murdered, and our servicemen who have so valiantly fought to the bitter end. We remember what makes this country great, the idea that freedom can and will survive, grow and flourish. If in no other corner of the earth than here, people will enjoy a life free of murder squads and mass killings.

We will continue to live our lives free of fear, cowardliness or shame. We are Americans, and that still means something. We might not be the titian we once were, but we are far from weak or frail. We need the resolve, courage and the fortitude to see this war through. We must allow our troops to fight as they need to, and provide the assets that are critical. We must deny sanctuary and supply to those that wish to do us harm, regardless of what they call themselves or where they hide. We must remain vigilant at home and understand they can touch us here – no one is invulnerable, particularly if the threat is willfully ignored. It is up to us as a nation to see this through and preserve our way of life.

Please remember that, and remember the alternative. Freedom is never lost all at once, it’s slowly and methodically stripped away.

A shitload of airplanes disapear