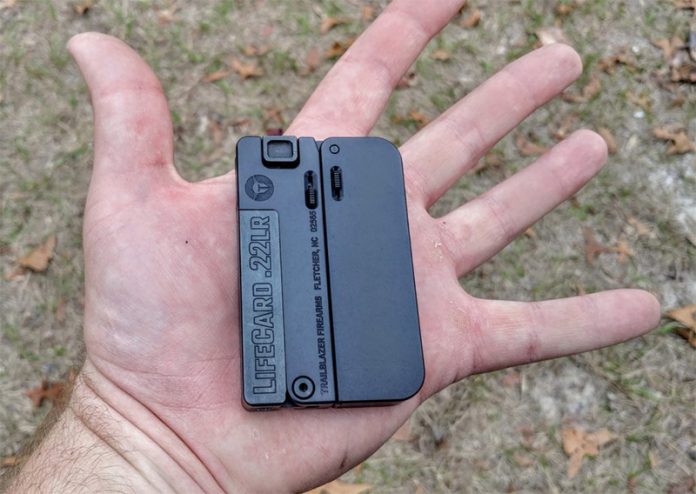 Practicality and cool factor are often strange bedfellows when it comes to the firearms industry. There is cool, and there is practical, but is one often both? The Lifecard is certainly attempting to make you think so. The gun is more like something you’d see in a James Bond movie than an actual gun store. That’s what draws your eye, and that’s fine, but does it work and is it practical? That is what we aim to answer today. 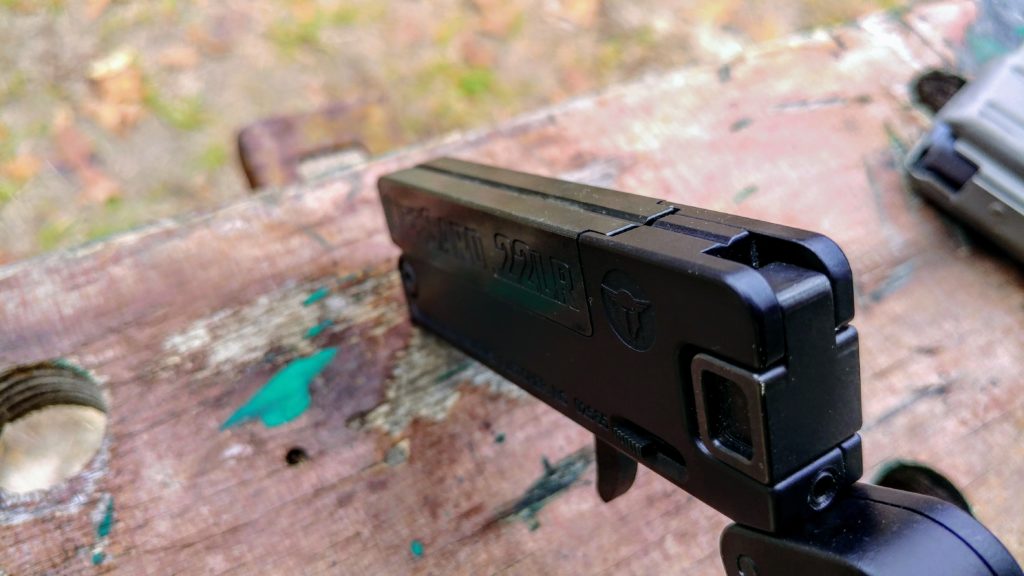 The Lifecard gains its name from its interesting design. It folds into the shape of a credit card. Albeit it’s a bit thicker. The Lifecard then folds into a more traditional gun when the user wants to fire it. Folding it is as simple as pulling a single toggle that releases a locking device. This allows you to fold and unfold the ‘pistol’ grip of the gun. You can do it with one hand even. 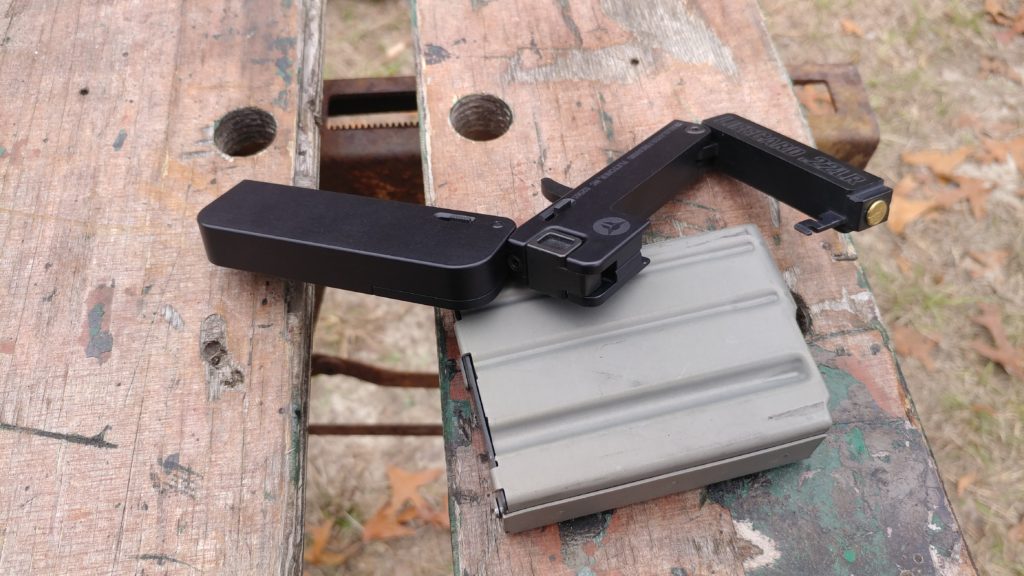 Loading the gun functions almost the same way. Pull a toggle and pull the barrel upwards. Place the 22 LR round in the barrel, close it, cock it and you are ready to rock and roll. To cock the gun you pull a striker rearward until it locks into position. It’s a simple system that functions well.

I will admit this is the easiest gun I’ve ever carried. I could legitimately forget about it. In its folded configuration the gun’s trigger is completely covered and the gun cannot fold cocked. It’s an insanely safe system for pocket carry or deep carry in general. It’s smaller than my cell phone when folded, and fits just about anywhere I needed to carry it. 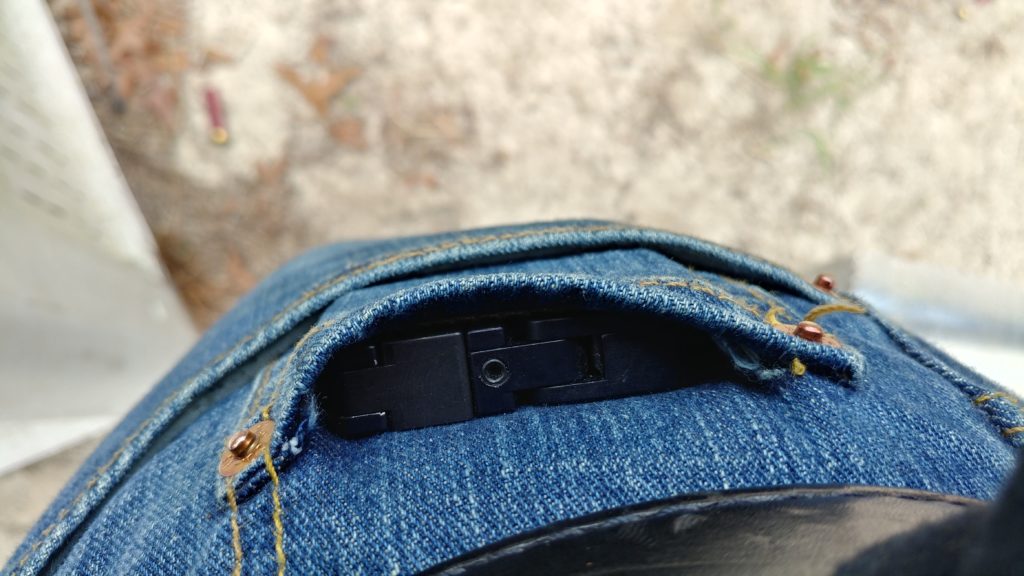 Trailblazer sells the gun as an easy to carry gun, and it is. However, I see less as a convenience carry gun and more of a deep concealment gun. When compared to guns like the Ruger LCP it really isn’t that much smaller. The advantage it offers is the fact it doesn’t look like a gun. It doesn’t leave the traditional outline of a gun and is extremely hard to detect. 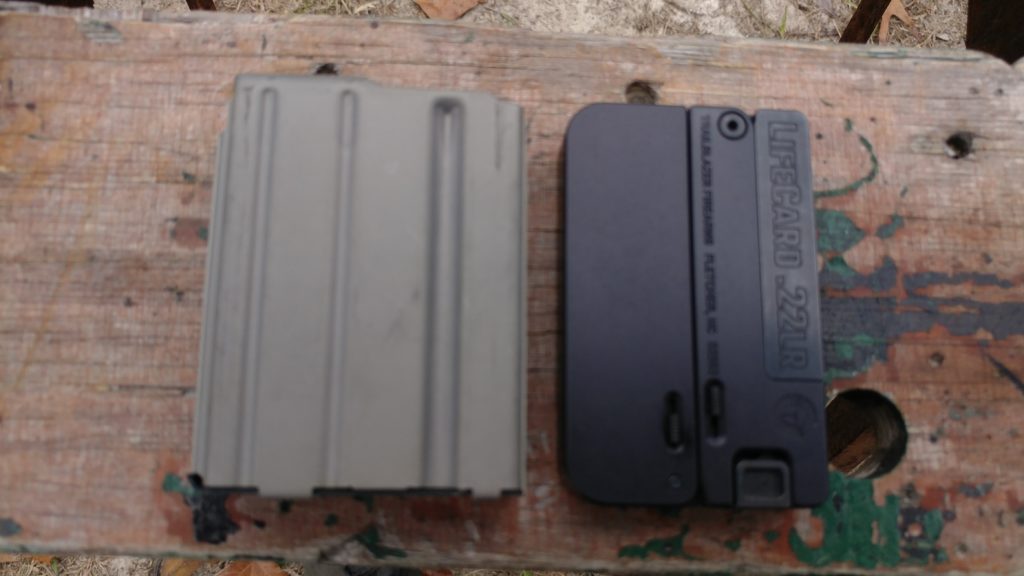 It’s lightweight too and could be carried in the pocket of a t-shirt and be invisible. That is where I see the practicality of this gun. It’s ability to be incredibly concealed. Even carried in the hand in plain sight most people wouldn’t recognize it as a gun. It’s a limited use weapon, but it does have a use. Let’s call it discretionary carry or hostile environment carry.

Yes…it is only 1 round of 22 LR, but that’s better than a pointy stick, right? Its like a modern Liberator.

Regardless of your feelings on the gun it is still a gun and deserves some range time. Let’s talk function as a firearm, and not as a concept. From the outset, the gun’s grip looks uncomfortable, but some thought went into it. It’s rounded just right for comfort and fills the hand well.  The gun’s trigger is surprisingly nice. It’s a short single action design that breaks cleanly. 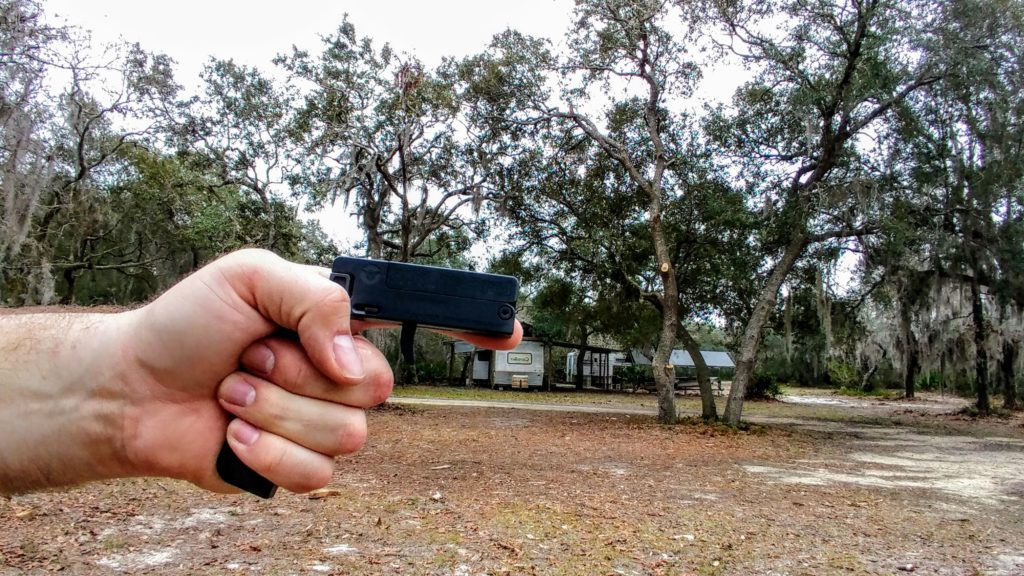 The gun doesn’t have any real sights, just a trench running over the top. This makes it a pure point shooting gun. Even out to 15 yards you can hit a man-sized target with little difficulty. At first, I absolutely sucked with this gun, but at 7 yards I produced a respectable group. The biggest problem regarding accuracy is the striker is pretty big and heavy. You can feel it slam forward and it can toss your shot slightly. A little Kentucky windage is all it takes to correct it. 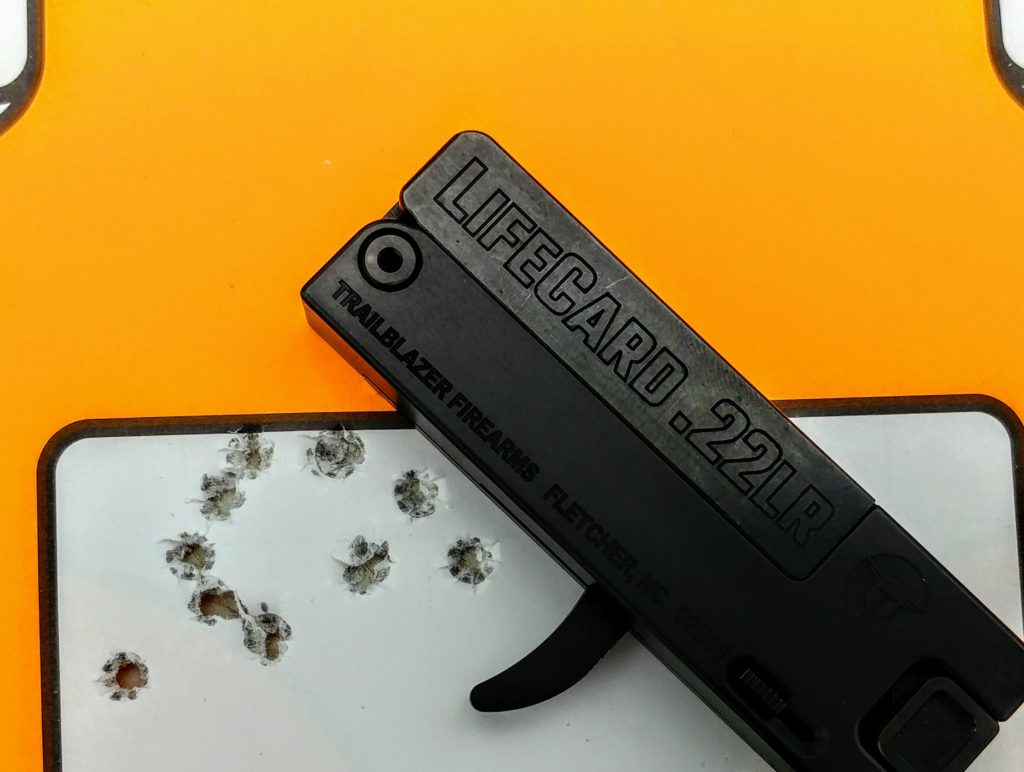 It’s a fun gun to shoot, and its weirdness makes it draw some interesting attention at the range. It even has a little bit of recoil, something I don’t associate with a rimfire handgun.

I tried a few different scenarios where I ‘drew’ the gun, unfolded it and fired a shot as quick as I good. This isn’t something you can do if a bad guy is rushing you. In that situation, I’d probably go hand to hand. However, if something popped off and you could take cover prior to engaging you could draw and get the gun in action in a few seconds. 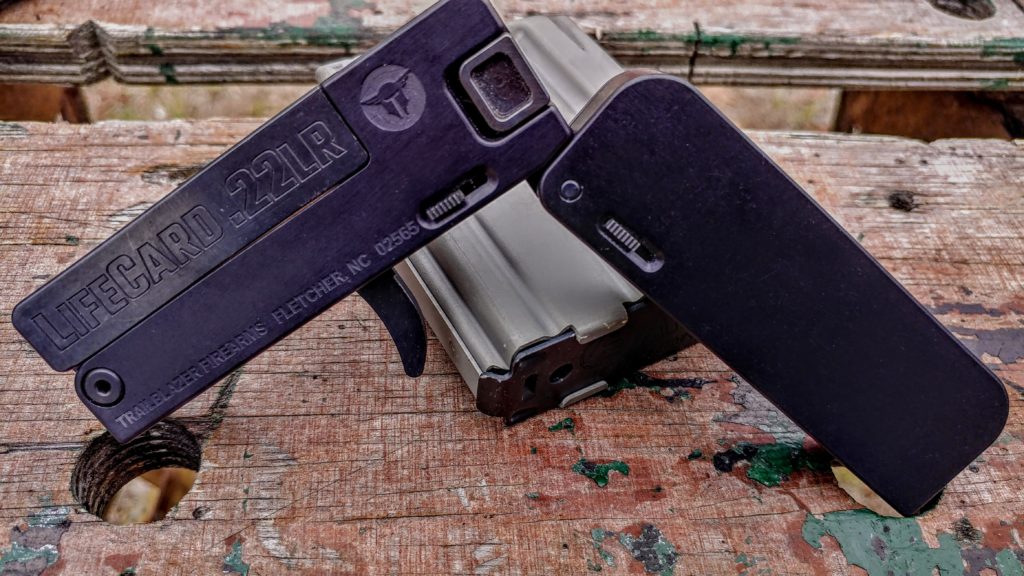 The gun’s folding/unfolding mechanism are easy to engage and intuitive. The tabs are small, but the texturing helps engage the toggles in a hurry. The cocking mechanism is large and easy to grip and rip.

In terms of reliability its hard to screw this gun up. There is no slide to cycle, no cylinder to time, its just a straight striker fired gun. The only way it could fail is if you got light primer strikes, and with the mighty striker on this thing that’s not happening. 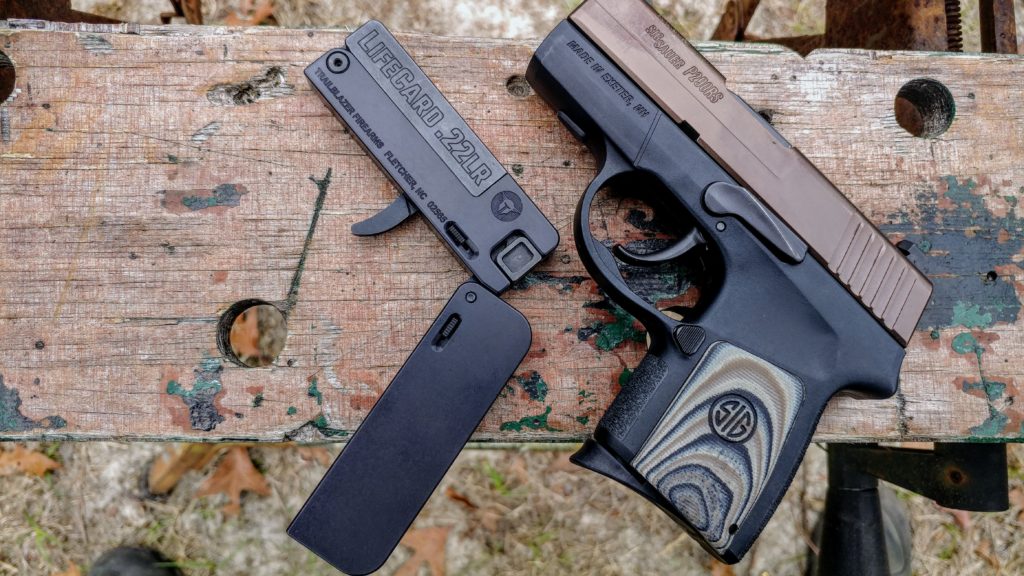 Reliability is going to be more determined by your ammunition choice. With Remington Gold Bullet I had about a 10% failure to fire rate. With Federal Automatch hardly any. I had zero failures with CCI Mini Mags.

In terms of function and purpose, the Lifecard has one. It wouldn’t be my choice for a main defensive firearm, but it feels a small niche that no other gun does. I only have one complaint. There is a small compartment designed to let you carry extra ammo. That’s great, but you sound like you are carrying a pocketful of change. The rounds shift and move and create a jingling sound. Not exactly stealthy. 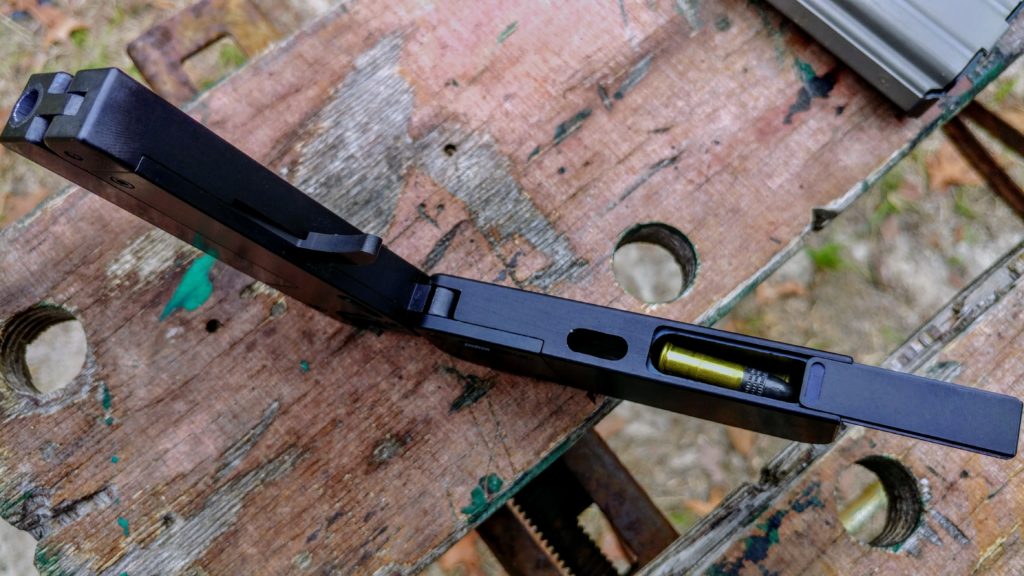 This compartment is great for storing a few Skittles or breath mints though, or maybe even a small handcuff key. You live your life the way you want.

The Lifecard is an oddly fun gun. It’s functional, fills a role for non-permissive carry, and it’s uniqueness alone made me a customer. Is it for everyone? Probably not. Is it for you is the real question.