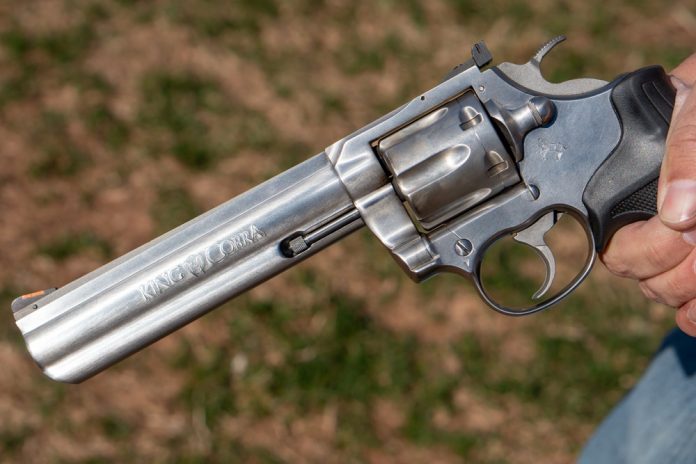 When you think wheelgun your thoughts probably wander to the iconic old west and conjure images of the the Colt Peacemaker. The six shooter is a staple in the psyche of Americans and nobody did it better than Colt. While they have been out of the revolver game for a few years, Colt has recently dipped their toes back in the water with the Colt Cobra released in 2017 and now the King Cobra in 2019.

With the new releases, it got me feeling nostalgic so I dug through the Guns.com warehouse and struck gold with a 1989 six-inch Stainless Colt King Cobra. This gun is pure fun. Chambered in .357 magnum the King Cobra can shoot both .38 special and the .357 Magnum. With both double- and single-action capability, the King Cobra shoots like a dream. In double-action the trigger is smooth and not to heavy. In single-action the trigger is very sensitive and light making precision shots easy.

The King Cobra, while looking similar to the wildly popular Colt Python, was actually designed as more of an improvement on the Trooper model. Originally designed for law enforcement and target shooters, the bright bladed front sight and windage adjustable rear sight, the King Cobra is a nice change from the normal revolver sights that pretty much provide only marginally better sighting that point aiming. The large flattened hammer is easy to get a purchase on and easy to cock into single action mode.

The long barrel and nearly 3 pounds of steel make shooting .38 special feel like you are shooting a toy gun. With very little perceived recoil or muzzle flip, even when shooting double action, the .38 special is a great choice for plinking and getting used to the trigger. While the .357 is obviously a bit more stout, even it is relatively pleasant to shoot, if only moderately more difficult to control. Coming from an air weight snub nose Smith & Wesson .38 as my main revolver the King Cobra actually was a blast to shoot. In fact I shot through nearly 150 rounds in one session!

While this six-inch King Cobra would not be my ideal gun for every day carry, it is the perfect ranch or hiking gun. I could absolutely see having this on the farm for snakes, critters, and other four or two legged intruders. Ultimately for me, this gun fills in as a fun gun that is a step between simple .22’s and semi autos.

Having the opportunity to shoot this classic revolver was a real treat. It was the most fun I’ve had on the range in quite some time. It made me consider seriously taking a look into the new 3 inch model as a new item in my gun safe. Overall I never doubted that I would be impressed by a Colt revolver, but this gun truly did surprise me in the amount of enjoyment I got from shooting it. If you have a chance to get one you should jump on it. At least, that’s my opinion.

Check out the revolvers in the Guns.com Vault and collection of Certified Used Guns.