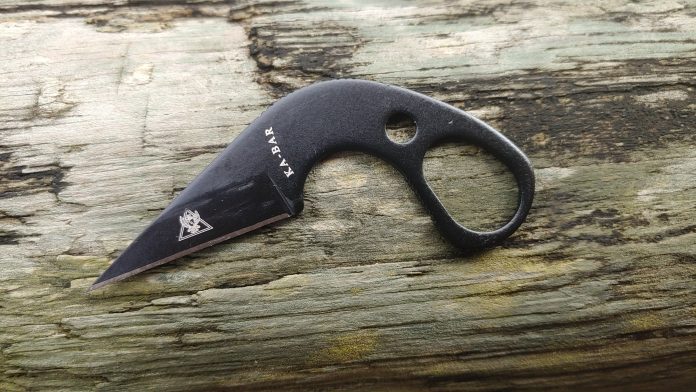 The KA-BAR LDK is one of many knives that make up the KA-BAR’s Master Series of Knives. Experts in several respective fields design these knives. Greg Ellifritz of Active Response Training designed the LDK. Greg is a veteran police officers, tactical firearms instructor, and martial artist. The LDK stands for Last Ditch Knife and, according to Greg, was designed to be as small as possible while dealing exceptional damage. The blade is supposed to replicate a #11 scalpel blade. Like a scalpel blade, it cuts and efficiently. 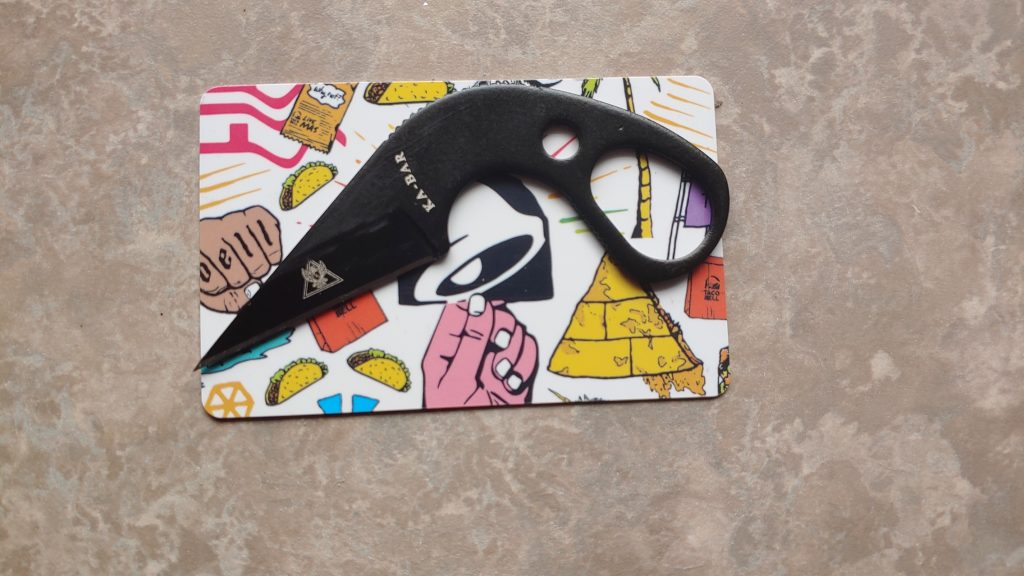 The LDK is part of the TDI series of knives. Designed to be roughly the length as a credit card, the LDK is a teeny tiny knife. It comes with a hard plastic sheath, but the small size allows it to be stashed in a wallet compartment if necessary.

The size allows it to be carried anywhere. You can carry it like a neck knife, lace it into a boot, strap it down on your gear, or even on your belt like any other TDI series knife. 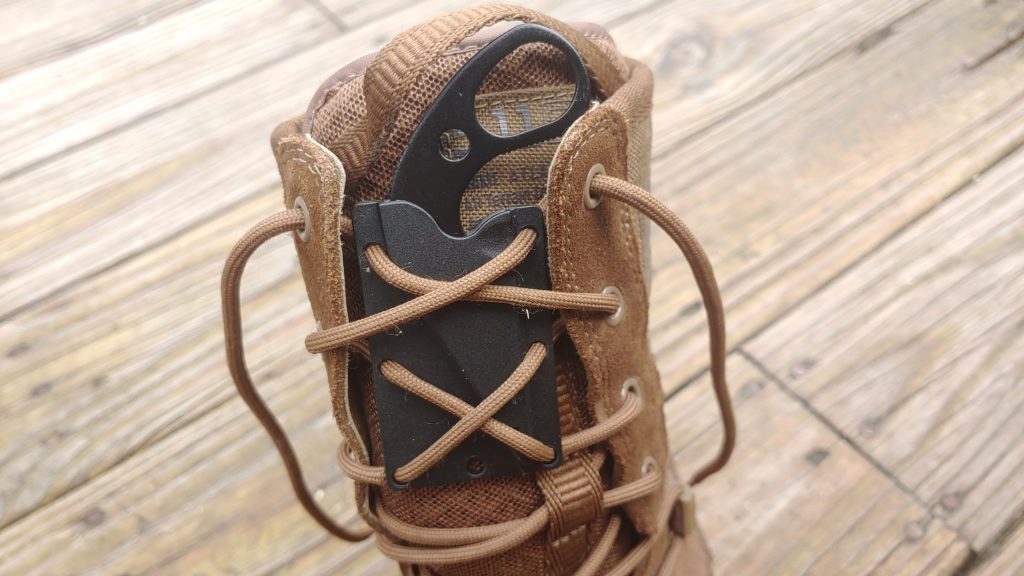 The small nature of the Last Ditch Knife means it’s a genuine last resort tool. When your down to your wits and fists, the LDK adds a little extra.

The LDK’s unique design makes it a bit challenging to picture how it’s used. The hole isn’t designed for your finger to fit into when presenting the knife in a fighting grip. Instead, the handle fits around your trigger and middle finger, and the blade is held in a punching grip. The idea is simple, and the LDK adds some serious sting to every punch you throw. 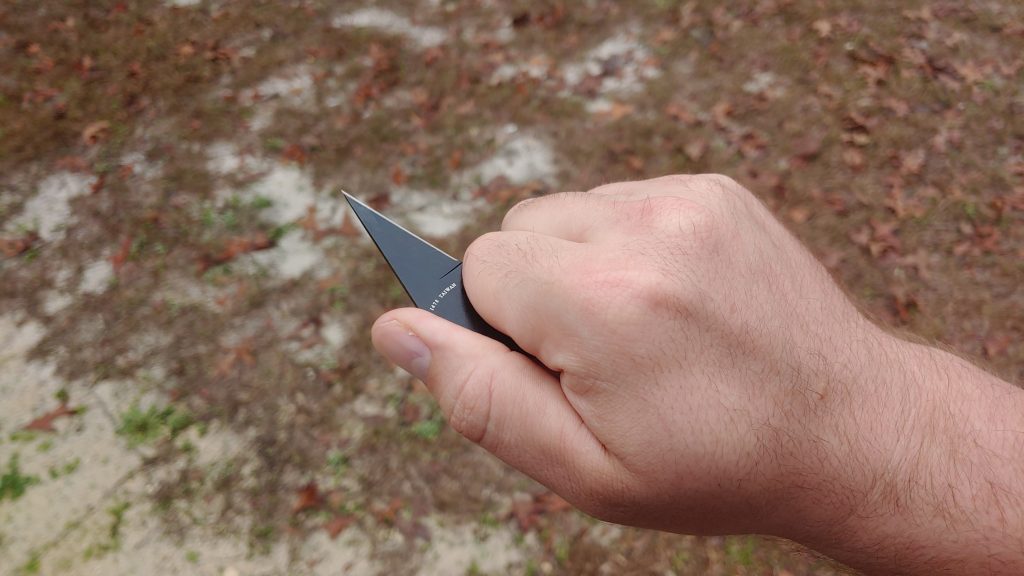 The hole in the KA-BAR LDK serves a purpose. When the knife is positioned against a flat surface, you can’t get a great grip on the knife. In this situation, you put a finger through the hole to draw the knife and transition to a punch grip from there. 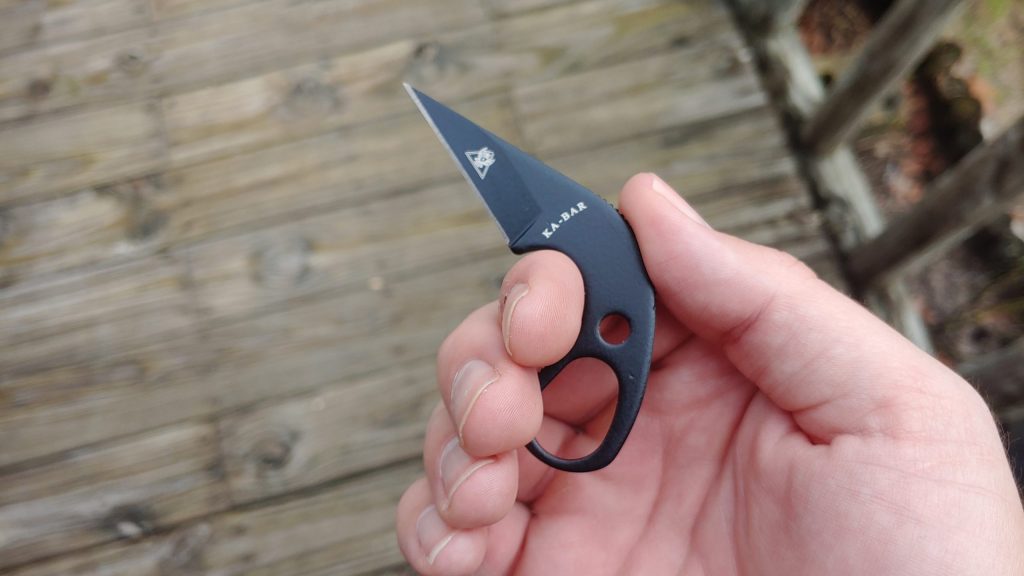 The LDK allows you a discrete force multiplier that will stab and slash a bad guy. It’s certainly more of a stabber than a slasher, but the incredibly sharp blade will easily cut through flesh if raked downwards. Sometimes you are forced to draw blood, if forced to draw it.. draw a lot of it. Fighting with a knife isn’t elegant.

Breaking the Blade Down

The KA-BAR LDK is a simple knife. Its small and the thin design keeps it out of the field of ‘utility’ knife. It’s not for your everyday EDC tasks by any means. It’s a purpose-built defensive tool designed to give a last-ditch object beyond your fist alone. The LDK weighs only 2.4 ounces and measures right around 3.5 inches long overall.

The LDK is made from one of those fun to type stainless steels, specifically, 9Cr18. Stainless steels vary significantly in quality, and this is one of the budget steels out there. Not a bad choice for a knife designed to be used in a life and death encounter. It’s essentially disposable. 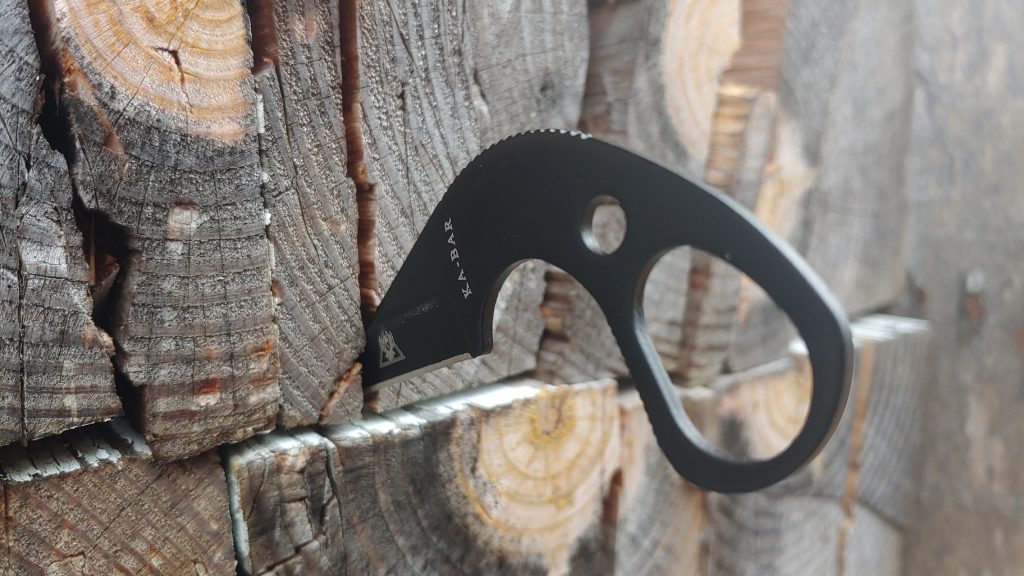 It’s not a knife for work, so this stainless steel is fine for this design. In fact, it benefits from having stainless steel’s resistance to corrosion. The LDK is a knife that could be carried very tightly to the body and will likely be exposed to sweat, which would rust a carbon blade.

The grip is textured with two points for increased retention and to provide a good grip. A good bit of jimping allows for a guided grip on the knife. 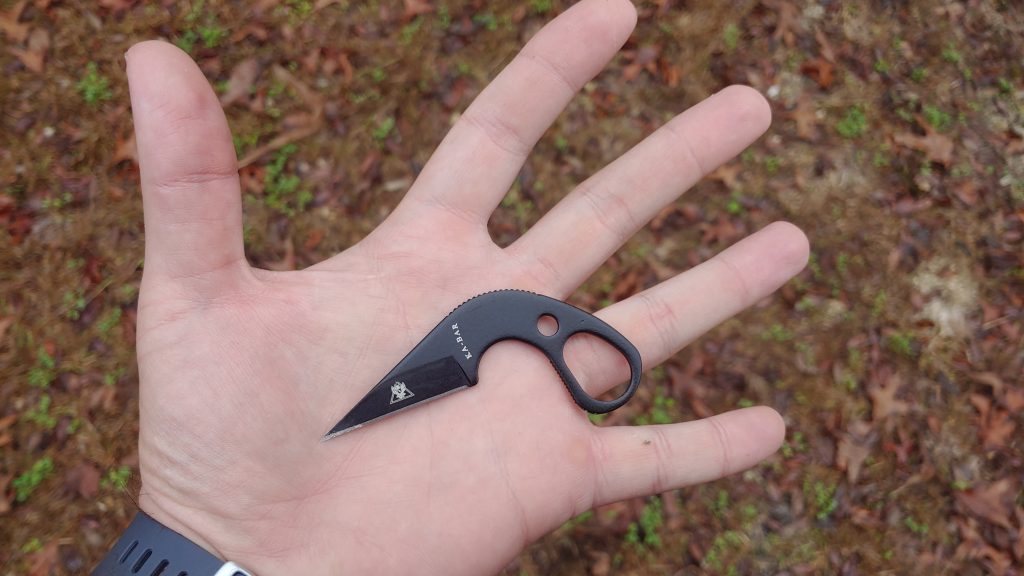 I’ve experimented with carrying the knife in a variety of ways. As a neck knife, it absolutely disappears under a shirt. I carry with the handle down so I can reach up the shirt and pull the blade. The sheath has seven various lashing points for attaching cables or pocket clips. 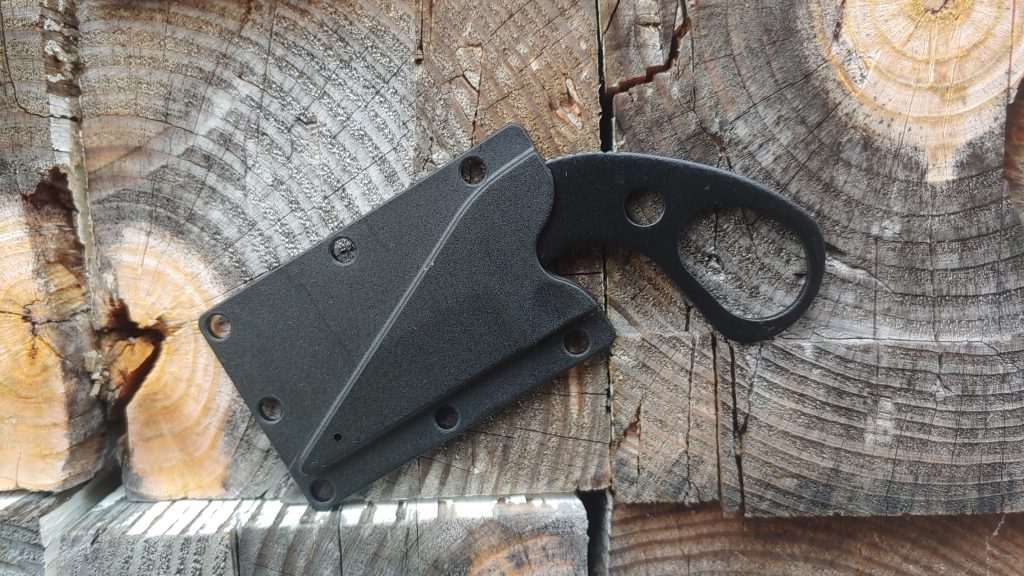 I tried the old boot carry method I’ve seen advertised with the TDI series since 2007. The LDK is ultra-small and fits well on a boot. It’s also nearly invisible under a pair of pants. 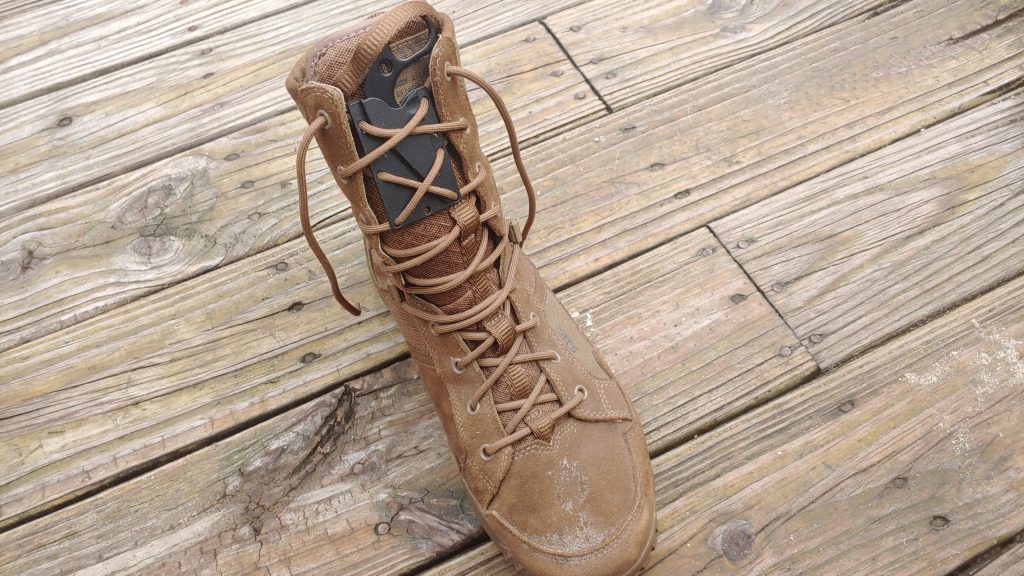 The only downside is getting the boot on and off presents a challenge. The boot laces can’t be loosened and the tongue has a lot less leeway when trying to pop the boots on and off. 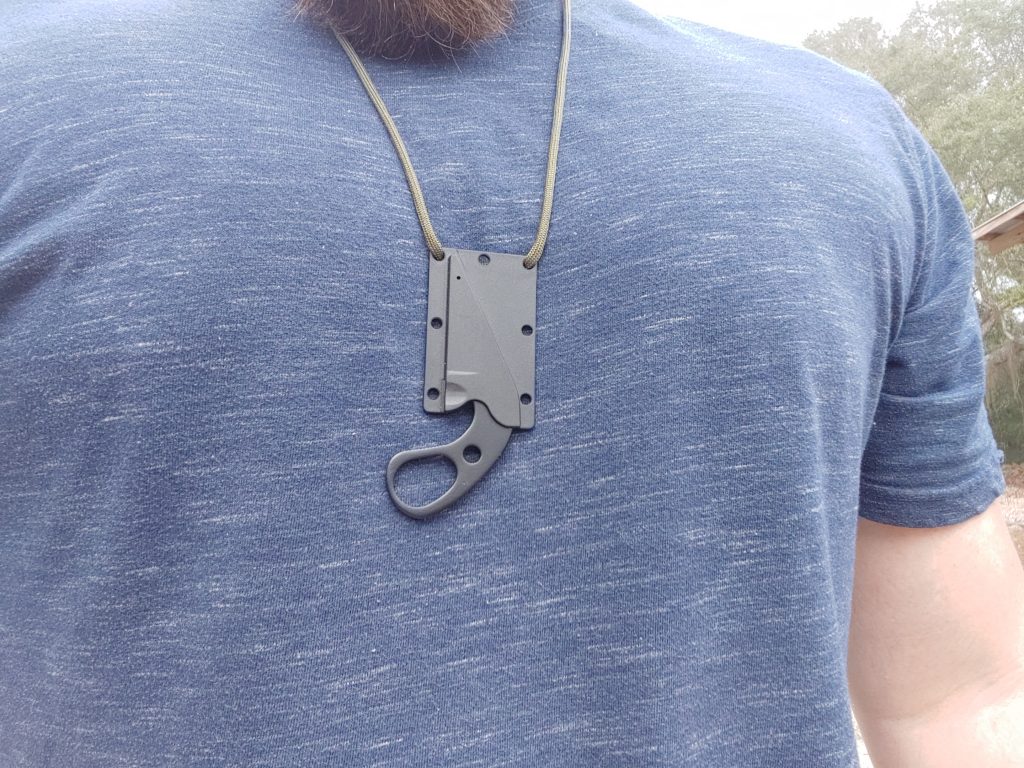 I’m dreaming of an excellent pocket carry knife with the LDK. If I find some kind of wedge to attach to the sheath that will keep the sheath in my pocket when I draw the LDK, I see a ton of value in pocket carrying the knife.

The KA-BAR LDK is a teeny tiny knife that could be carried in both a three-piece suit or a Speedo. The Last Ditch Knife truly lives up to its name and adds a little sting to your punches when you have no other option. It can be easily hidden and tough to find in a cursory search. The LDK isn’t a versatile knife, but in its niche, it’s effective.