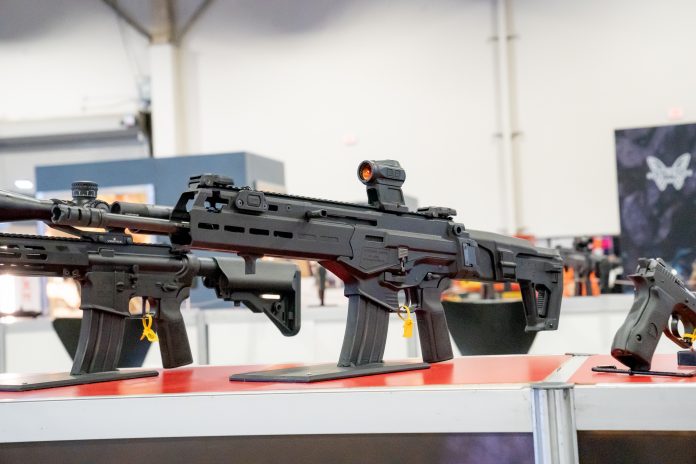 A rifle that originally popped up on the Brazilian branch of IWI’s media channels as a military/LEO export project, the Carmel intrigued US gun audiences immediately and it is no surprise why. The US has been awash in NextGen carbine hype since the FN SCAR and Magpul Masada. We’ve been seeking a ‘better’ rifle than the AR-15. We were promised an AR-15 successor.

We’ve been promised much and left underwhelmed, unless price was no object. But let’s be honest, price is always an object when it comes to logistics. I may be able to afford the latest high dollar super gat at a moment it releases and I may not, that’s subjective to my tastes and preferences. What doesn’t make sense from the cold calculations of performance vs logistics is getting a $3,500 rifle in the same performance envelope as at $1,500 rifle.

That era is ending.

The consensus of GWOT and post-GWOT seems to be that… there isn’t really a better rifle than the AR-15, not significantly better and not cost effectively better. Especially if we are considering one of the ambi-receiver designs that we see out of KAC, BG, FCD, LMT, LWRCi, Geissele and so on, the AR continues to hold its own just fine. .

But if there is one rifle type that seems to be emerging as the next weapon, because it is better in an objective performance sense, it’s a modern variant of the AR-18/AR-180. I’ll even include piston drive AR designs like HK, PWS, and LWRCi in this category. The modern modular takes on the AR-18 short stroke gas piston design are in most of the dominant modern rifle designs.

But price has controlled the NextGen market space more than any other factor. $2,000 gets you a fine selection of options in the AR-15 market, with top shelf materials and quality control. It hasn’t touched the NextGen carbines until now.

A keen eye and a good memory will note that the US version of the Carmel doesn’t match the original we saw from years back. The rifle has been upgraded in several respects for the highly discerning and prone to modify US Market.

The Carmel is entering a now aging field of NextGen 5.56 systems, but it is doing so with a stronger feature set than most of those rifles launched with. Notably, it’s trigger puts to shame most stock AR and NextGen rifle triggers. Better than stock SCAR, MCX, and mil-spec weight ARs, especially if you prefer a 2-stage. I do.

It’s greatest selling point however is the price, and given the market we are seeing emerge in 2023 new rifle owners looking for performance will notice when its sitting in parallel with high performance AR brands like BCM, Daniel Defense, and SOLGW.

From the company that brought to market the Masada, it’s just a fine 9mm, this rifle inhabits the spiritual succession of the Magpul Masada rifle concept. Fully featured and competitively priced.

I have no word on non-5.56 calibers at this time, we could potentially see .300BLK and SBR variants of the gun if the 5.56 does well. I suspect it isn’t going to be too difficult to turn into a ~14.5″ with a barrel chop and gas system tune-up either, a popular SCAR mod.

At the end of the day it’s just another 5.56x45mm offering, but we’re a 5.56x45mm hungry market and the Carmel hits so many of the quality and feature marks at just the right market price.