When I get to do nerd stuff with shotguns, I get giddy. Really giddy, and recently an original 1950s Ithaca 37 fell into my lap. I’m cleaning it up for a friend, and in doing so, I get to shoot and test it, of course. The Ithaca 37 is a historical shotgun that’s served generations of hunters, law enforcement, and military forces. It’s carved its way into the shotgun hall of fame, and today we will discuss why.

Specs and Details and History

The Ithaca 37 is a John Browning design, and very few people credit Browning with the design. I feel this is often ignored because Browning didn’t work for Ithaca. He worked for Remington when he designed the Remington Model 17. The Model 17 was a lightweight 20 gauge shotgun, and the Model 17 patent eventually expired. This allowed Ithaca to beef up the design to 12 gauge and release their very own shotgun. That being said, Ithaca made a few changes to make the design more affordable to produce. 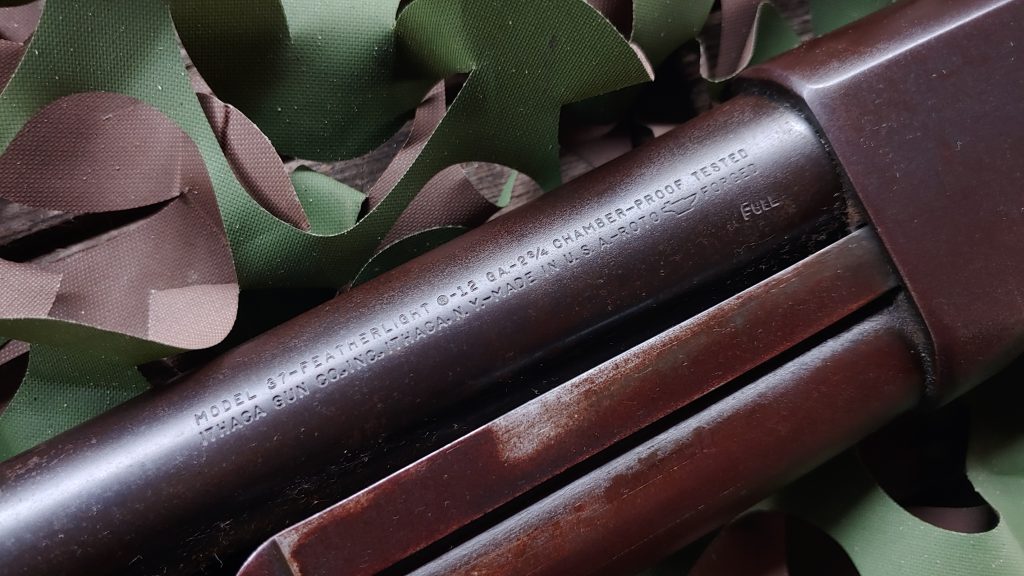 The Ithaca 37 hit the market in 1937 and didn’t do great. The world was on the verge of a World War once more, the great depression was raging on, and honestly, it seemed like the worst possible time to release a sporting shotgun. Ithaca could have been left holding an expensive bag, but the wartime need for handguns and long guns gave Ithaca an infusion of much-needed capital. The Model 37 was even adopted for limited use in the war with the changes necessary to make it a trench gun.

The war ended, and Ithaca began producing the sporting variants of the Ithaca 37 once more. The gun started life as a hunting shotgun and was a popular choice, quickly becoming a favorite of duck hunters. Enough so that Ithaca did some fancy inscribing work and left some of the higher grade models adorned with ducks flying.

The Ithaca 37 quickly became the American standard in modern magazine fed shotguns. It packed a variety of modern features into a very simple and reliable pump-action shotgun. 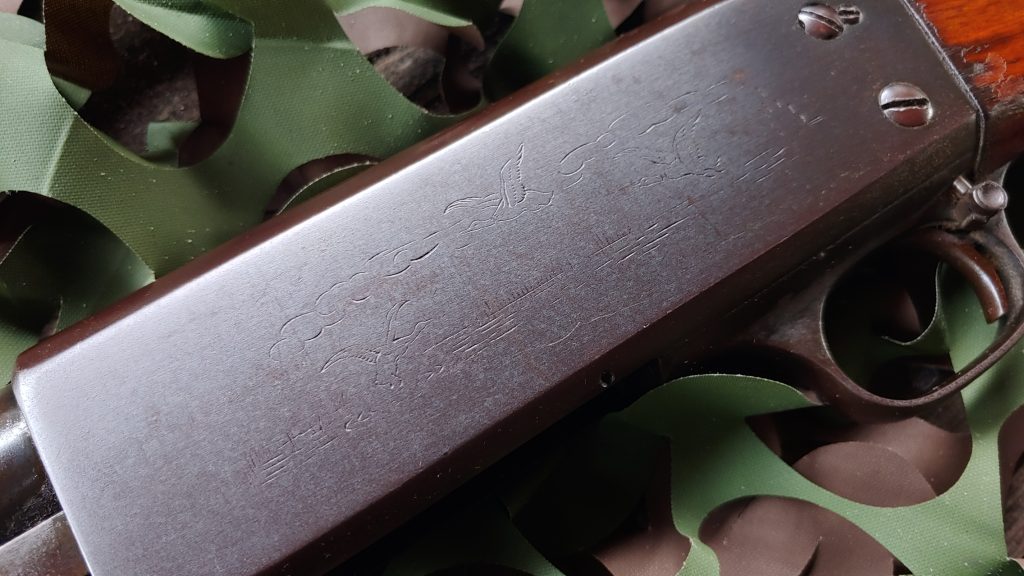 Like most shotguns, the Ithaca 37 saw more widespread use in the tactical world as well. It was adopted by the military outside of just WW2. It served in Korea, as well as Vietnam. In Vietnam, it gained an excellent reputation for durability and reliability with special operations forces. It shrugged off the austere environment that is the jungle. It was also a popular choice for police forces, not to mention that Detective Ricardo Tubbs used a Stakeout model in Miami Vice.

Ithaca graced the 37 with the title featherlight, which seemed like an odd title for a 7.5-pound shotgun. To be fair, other slide-action shotguns like the Model 1897 weighed 8 pounds, so the Ithaca was lighter than most. This model is outfitted with classic American walnut furniture. This includes the corn cob forend and wooden stock outfitted with a plastic butt plate. No rubber limb saver pad here. 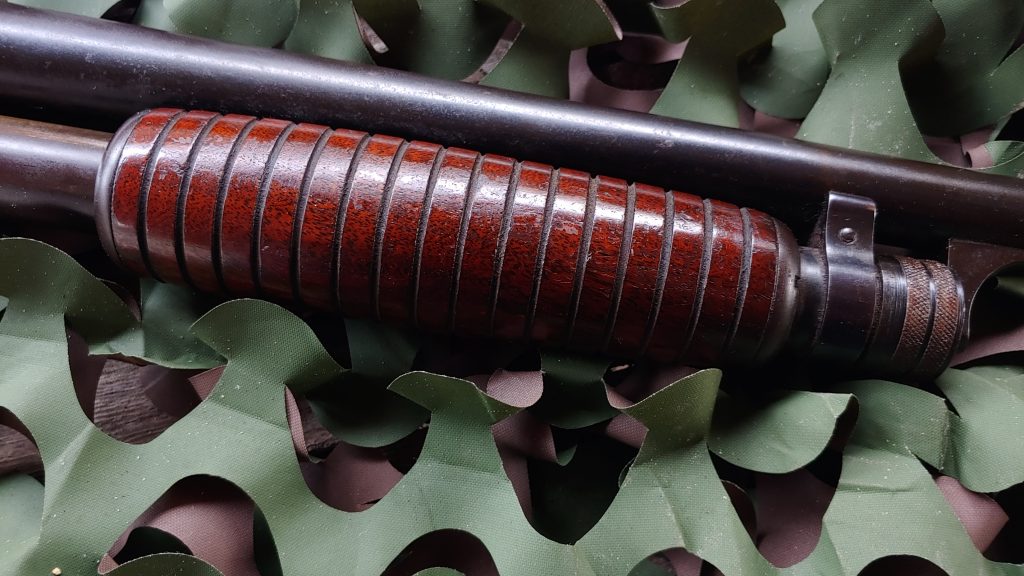 The length of pull is 13.5 inches, which is a little long for some smaller shooters, but much better than the modern obsession with 14.5-inch LOPs. It is extremely comfortable and shoulders naturally. The weight is locked to the rear, and the barrel is somewhat thin. This is good for a natural swing and something I’d imagine most bird hunters desire. The Ithaca 37 is also easy to hold in the firing position for a long period of time. 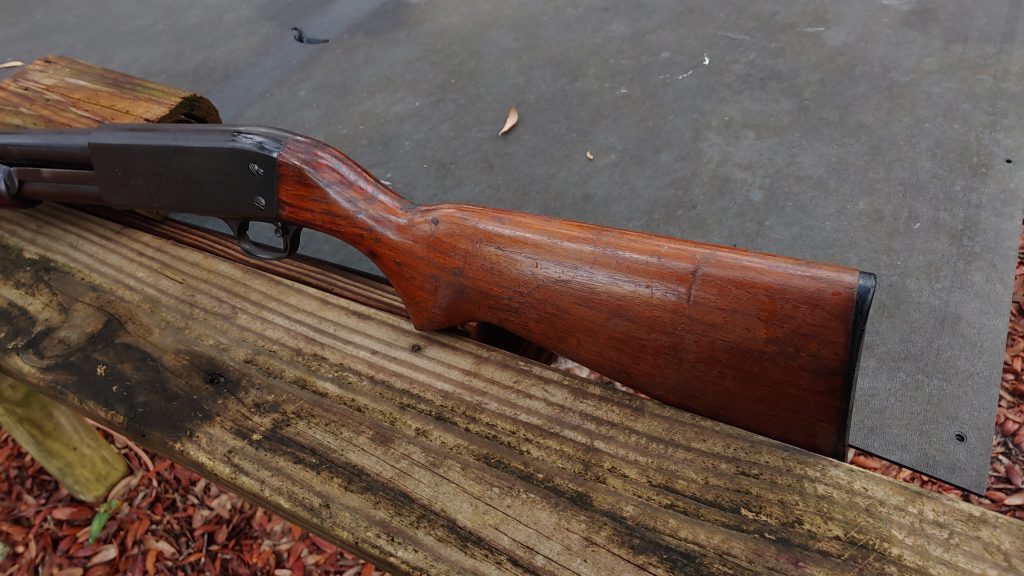 The controls are well done with easy access safety and pump release. The safety is better suited for right-handers, but the pump lock is easy to reach with either hand. 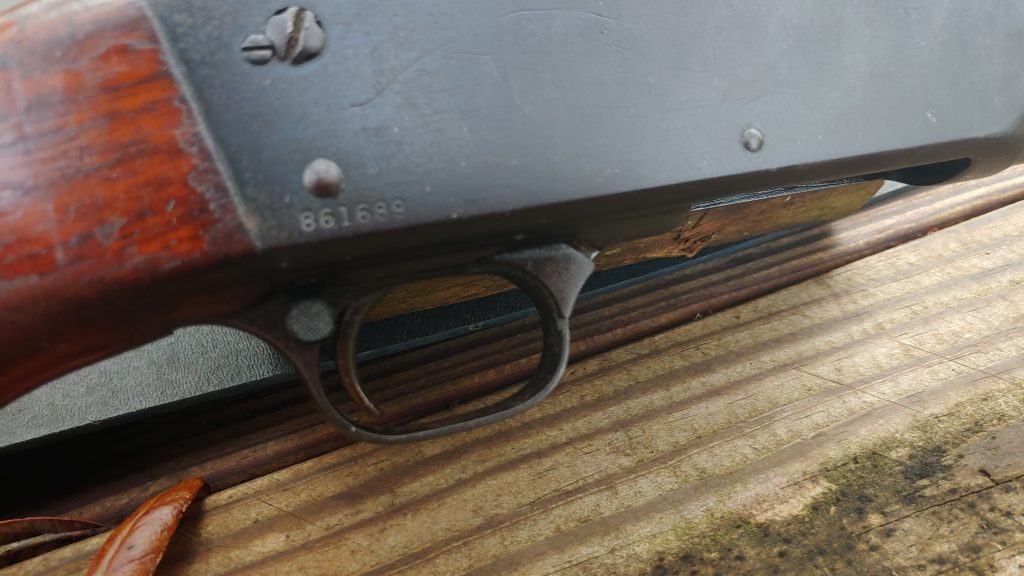 Overall, it’s a well balanced little gun, and I can see why it’s the longest produced pump-action shotgun on the market. Even with the modernized variants of the Remington 870 and Mossberg 500 series, the Ithaca 37 remains in production.

What Separates the Ithaca 37 from the Pack

The Ithaca 37 loads and ejects from the bottom of the gun. The original Model 17 did the same, as does the BPS. This bottom-loading design makes the shotgun highly desirable for a number of reasons. First, it’s perfectly ambidextrous. Lefties and righties can both use it to great effect.

The Ithaca 37 became particularly popular with duck hunters due to this bottom ejecting design. In a crowded duck blind, the shells eject downwards instead of into your friend’s faces. The bottom ejection also keeps the shells in a boat and not dumped into your local pond. 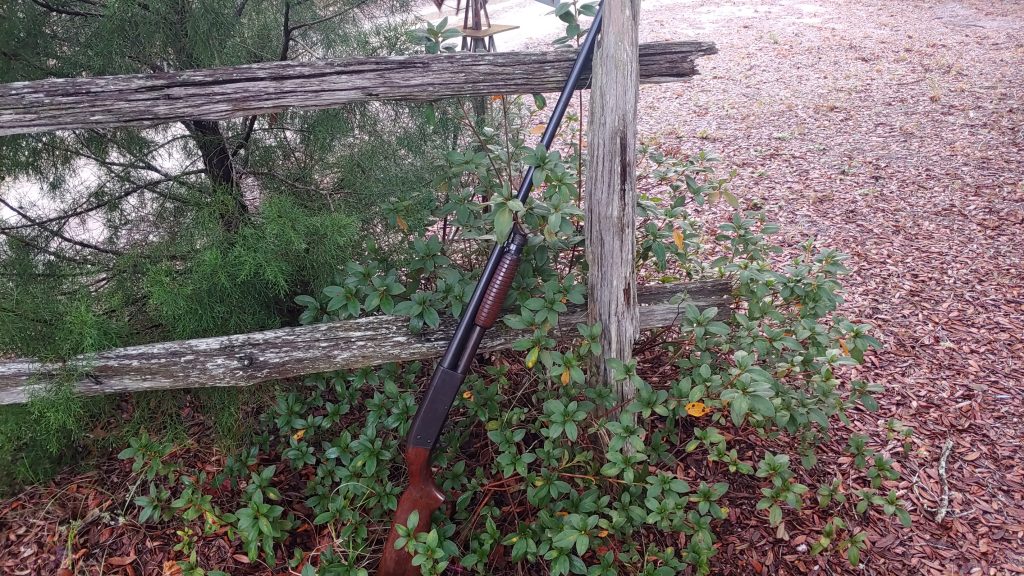 The bottom ejection design also means there is only a single slot in your gun. This makes the gun a tank capable of resisting dirt, grime, mud, and snow like an M4 Sherman throws off German infantry. This is valuable in duck season when it’s wet and muddy and in the Vietnam jungle, where this shotgun earned its reputation for reliability.

The closed receiver lets nothing in and doesn’t allow the gun to be filled with anything but shells and hate. 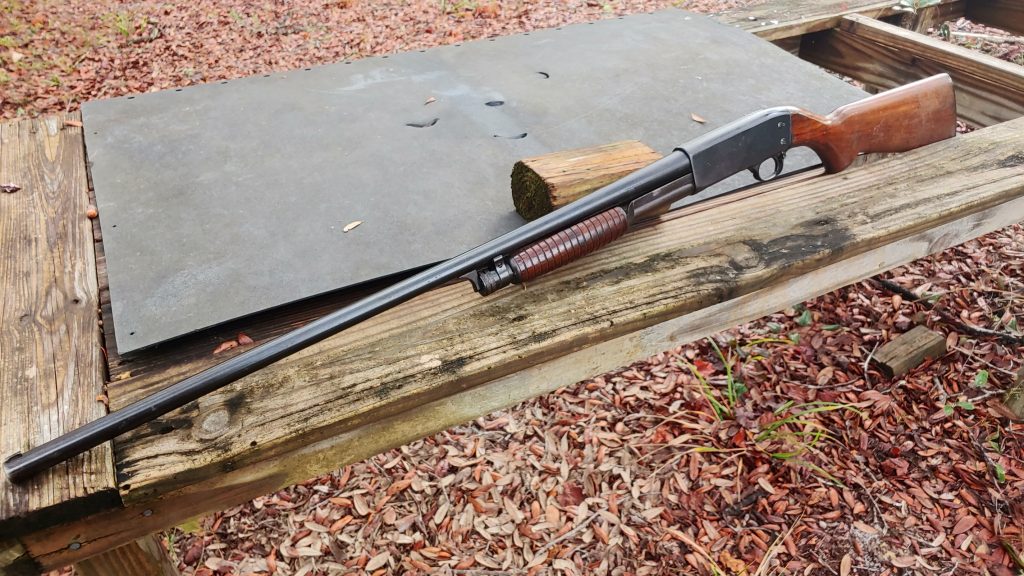 Another feature in Ithaca 37’s produced prior to 1975 is the lack of a disconnector. This means if you hold the trigger and pump the gun, it will fire as soon as the pump closes. This makes dispensing those shells and that hate very quick. This 1950s built Ithaca 37 lacks the disconnector, and I will say it’s a very effective technique that makes it easy to empty a magazine tube in mere seconds.

The recoil is fierce, admittedly, and from the hip, it’s a bit more fun and easier to control than doing so when shouldered.

If you look around today, you’ll see plenty of Ithaca shotguns still in use. They are a favorite for hunters to this day, but they’d faded away from the tactical scene. One of the big reasons is the single action bar. Modern pump shotguns use a dual-action bar for increased reliability under stress and smoother pump action. Dual-action bars are hard to jam up, where single bars can twist and bind, making pumping difficult. 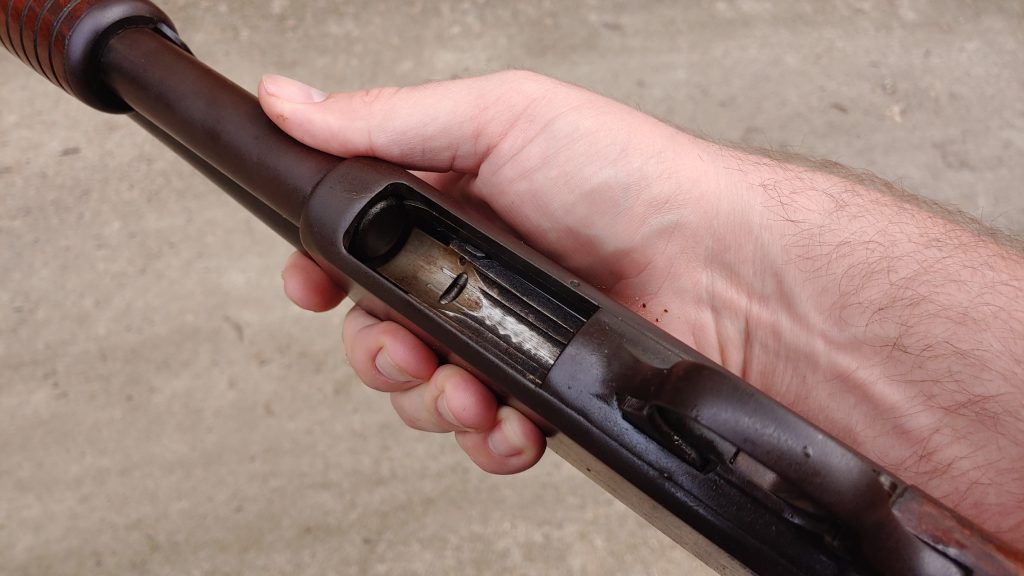 The forged receiver is also an expensive proposition, and that’s why your modern produced Ithaca 37’s cost right around a grand.

The Ithaca 37 is an all American shotgun. It represents American design and innovation alongside a certain degree of craftsmanship we often see today. The Ithaca 37 is a workhorse and has proven itself over and over. Shotguns like my example are still fully functional weapons that don’t require a soft hand or a kind touch. If you’re lucky enough to have a classic model, appreciate it, love it, and shoot it. Shoot the hell out of it.