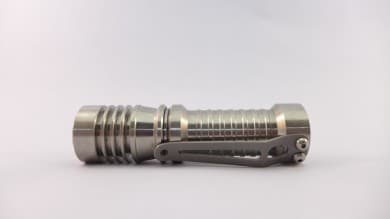 Great things come in threes–meals, late 90s shortstops (oh man, if we only knew back then), Stooges, ringed circuses, and primary colors. High end lights are no different.

In the world of high end flashlights there are a ton of amazing torches. Some are true customs–as bespoke as a suit from Savile Row. Some are made in impossibly small numbers, like the Larry Light, the T216 Honus Wagner of the flashlight world. But if you ask any flashaholic worth his or her salt, they will tell you there are three uber-pricey lights that stand above even this illustrious crowd. They are: 1) the McGizmo Haiku; 2) the HDS Rotary; and 3) the SPY 007.

I am sure there is some debate — folks might want to see a Lunasol model or a version of the Aeon in there or something from Photon Fanatic, but there is no denying that each one of these lights is something truly special. Each is amazing, different, and a truly superior product. I have had the fortune of owning all three and picking one over the other is like trying to decide between a Maserati, Lamborghini, and a Bugatti.

The McGizmo Haiku is not the brightest light in the world. It’s a bit long. But everything about the Haiku screams attention to detail. The battery tube is wonderful in the hand, the clicky is, of course, great (it’s sold separately by many light retailers), and the heat sinking really works. But all of this is merely the appetizer for the main course–an unparalleled and perfect beam.

Flashlight nerds like sunlight tints (Hi CRI) and clean useful beams, and the Haiku is the high watermark for both (you can get a Hi CRI or non-Hi CRI emitter). This is a aficionado’s light. The beam pattern is truly remarkable–the tight ball of concentrated light in the middle, called the hot spot, is plenty bright, and the surrounding halo of dimmer, diffuse light (called the spill), is clean and artifact-free. But the balance between the spill and the hotspot is what makes this light so amazing. It’s clean and has a nice transition from one to the other. It is such a useful beam pattern, allowing you to see quite a bit without totally killing your night vision. Every light I have ever reviewed gets compared to the Haiku and 3 years later, nothing comes close to having a better, more useful beam.

The HDS Rotary is the “bargain” light among the group, but honestly, this is the light I use the most. The Rotary’s bargain price of $200 is accompanied by an insane wait list (though a few retailers have them for sale, like Kaufmann Mercantile). The light is built like a bomb shelter. It has a decent output level of 200 lumens. It looks great with its stonewashed stainless steel bezel. But the rotary UI, with the selector ring at the tail end of the light is what makes this light one of the best of all time.

Dialing the light way, way down can save your night vision and still get you around in the dark (it’s whisper bright at around .25 lumens). Cranking the dial way up gives you plenty of light with a very good beam pattern. The genius of Henry’s design is that by placing the selector ring in the back of the light, around the switch, you can operate this light one handed, giving you a second hand free to do tasks in the dark. It may not have the exotic materials of the other lights on this list, but in terms of utility it is every bit their equal. When people hear that there is a $1,000 flashlight they usually do a double take. $1,000 is a lot of money (I got mine in a trade). What do you get for your money? Well, this is truly the Bugatti Veyron of flashlights. The performance is quite amazing, producing staggering highs and amazing lows from a tiny package. But lumens output is a fool’s quest and there are probably brighter lights out there in the same footprint.

There are three things that make this light outstanding. First is the form factor. There is no other light that looks or feels like the SPY in the hand (well,other than other SPY lights like the 005 and the Tri-V). There is something about the ergonomics that puts everything right where it needs to be. The light’s lay out is perfect for allowing you to use the light and switch modes quickly.

Second, the SPY has a powerful and useful programming mode. By removing the batteries and using the dial you can get into the guts of the light, resetting each of the levels of output and even changing the order in which the output levels come on. There is even a “memory reset” that really works like an oil change for your flashlight, putting everything back to normal and modulating the output to best suit the emitter and the batteries being used.

Third, and perhaps most importantly, the SPY’s craftsmanship is flawless. The idea that this light is basically carved out of a single piece of titanium is insane. Close inspection reveals details that make it clear why this light is so expensive. The battery compartment is carved out of the main titanium block, all the way down to the alignment posts for the compartment cover. The crisp and useful details on the exterior of the light make it a wonder to hold and use.

Lights this pricey are all luxury goods. You might be able to justify the price to yourself, but none other than a fellow flashaholic will buy those rationalizations. But each of these lights has a good reason (or two) why they cost so much.

Gun to the head, I would keep the HDS. It seems weird, because it lacks the Haiku’s clip and beam pattern and isn’t as bright as the SPY 007, but I have used it as a night stand light for enough time that I have bonded with it. Its UI is so brilliantly simply that it is the default light in my head. Its not the best of these lights, but it is my favorite, and clearly the best value. But again, this is like picking between luxury supercars. Only ones that fit in your pocket and don’t cost as much as a house. Compared to a Buggatti these are bargains!